The internet has long promised a golden age of metrics, online polling organisation YouGov is hoping to track our political opinions 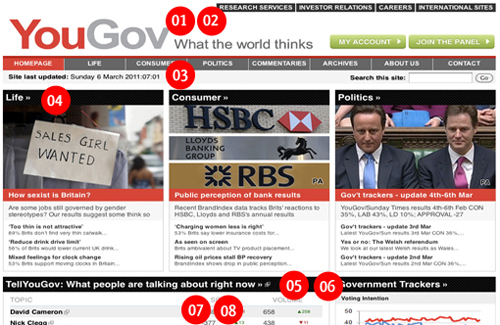 “YouGov is the authoritative measure of public opinion and consumer behaviour. It is our ambition to supply a live stream of continuous, accurate data and insight into what people are thinking and doing all over the world, all of the time, so that companies, governments and institutions can better serve the people that sustain them. YouGov is the most quoted research company in the UK, so by joining our panel of over 350,000 members and taking part in our surveys you really can get your voice heard. Panel members are sent regular surveys on a whole host of topics from politics to brands, finance to shopping, and we want to hear your views.”

01 YouGov – What the world thinks: The London-based online market research firm was launched in May 2000 by Stephan Shakespeare and Nadhim Zahawi. Digital polling radically reduces the cost of polling, allowing a much greater sample to be canvassed. This, in theory, makes for much greater accuracy. Panel members are recruited from targeted sources such as non-political websites or via specialist recruitment agencies. A detailed profile is completed, enabling YouGov to select a representative sample of electors for each survey. The general public can also join the panel through the website, although this sample is generally excluded from published political polls. A 40% response rate is usually reached within 24 hours and 60% within 72 hours. Each response is rewarded with an incentive of between 50p and £1 per survey, paid out as a lump sum of £50. The organisation claims their members and methodology constitute enough demographic information to represent the electorate as a whole.

02 Services and international sites: Obviously this data is valuable and YouGov offer a full range of research-based services. In addition to bespoke projects, there are a number of off-the-shelf products. BrandIndex measures daily shifts in public perception around 850 consumer lines. Last year, YouGov launched SixthSense, which aims to give a near-real time overview of different market sectors. Nine broad consumer areas are offered, such as ‘Health and Beauty’ and ‘Technology Market’, which are then broken down into focus areas, including ‘The British Mindset’, ‘Ethical Living’ and ‘Breakfast’. These reports can be bought individually, generally for £1750 each. Since the company was floated for £18million in 2005, it has been on something of an acquisition spree. In 2005, it acquired Siraj to focus on the Middle East (offices around the Persian Gulf, panel of 140,000). Polimetrix followed in 2006 (Palo Alto, New York, and Washington CD, panel of 1.1million) and 2007 saw Psychonomics (Cologne, Berlin, and Vienna, 120 researchers and consultants) and Zapera (offices across Scandinavia, panel of 140,000) join the YouGov family. The move hasn’t been particularly successful with resistance to the online methodology in the US and losses in Germany. Since 2010, the company has declared an interest in exporting the model rather than attain international influence through acquisition.

03 Subject areas: YouGov’s public website is an interesting variation on the newspaper, creating stories through survey findings. Broadly speaking, these are divided into ‘Life’, ‘Consumer’, and ‘Politics’. The range of reports in quite wide and may use data from sources outside of YouGov. There is also an archive of reports, which demonstrate sample size and questions, and a full breakdown of statistics. Sometimes the results are surprising, such as the 3% in the product placement report who claim never to watch television or films (rising to %5 in Scotland). Other recent surveys have included ‘Libya Intervention’ and ‘Ghosts’.

04 Main stories: YouGov are regularly commissioned by newspapers to (very accurately) predict the results of Pop Idol and X-Factor. This is obviously great advertising for the brand and the website retains something of a tabloid feel, rather than the more solemn identity we might associate with polling and research. The articles themselves are written by a small team and usually reflect the overall conclusions of research quite accurately. When consensus is overwhelming, the author may extrapolate what this may mean for key trends. But it is just as likely that the article presents a full range of opinions, when the results are more evenly weighted.

05 Leader Board: TellYouGov is a move into the real-time arena. Users can engage anonymously on any topic via a range of means, including email, SMS, Twitter or directly through the site. You can add a topic (a ‘Tyg’ as they call it) or comment on an existing one with a plus or minus. Topics then rise or fall accordingly and there are various ways to read the data. The results are rather depressing, consisting of blunt attacks on politicians and celebrities, and generally negative opinions on trending issues. YouGov claim they remove offensive remarks but a few homophobic comments were visible. It would be interesting to know how this data is used.

06 Government Trackers: This is YouGov’s daily log of voting intentions and government approval ratings. Attitudes to the domestic financial situation are also tracked. Although YouGov’s accuracy is hard to establish on a day-to-day basis, they highlight their success in specific circumstances, such as the 2008 London mayoral election and their record on general elections is generally strong. Various claims have been made over party political bias and ‘push polling’, such as an emotive weighting of questions concerning the Liberal Democrats, but it is hard to find sustained evidence to support.

07 Commentaries: In addition to key YouGov staff members, a small range of commentators engage with research to present a deeper analysis of (mainly) political trends. These try to explain shifts in public sympathy and also stray into consumer issues. The BBC’s John Humphrys is a regular contributor.

08 Other aspects: Despite the compelling economics of online research, YouGov has struggled financially. Following the recession, there was a collapse in profitability during 2008 (just after the company had expanded its overseas portfolio) and shares remained correspondingly low. However, shares have begun a modest climb throughout 2011 and the board continues to report a healthy balance sheet with £11million in net cash. Last year, The Register published a story about a YouGov feasibility study to see whether users were prepared to install tracking software on their computers. Sophos said it would classify the software as a ‘potentially unwanted application’.