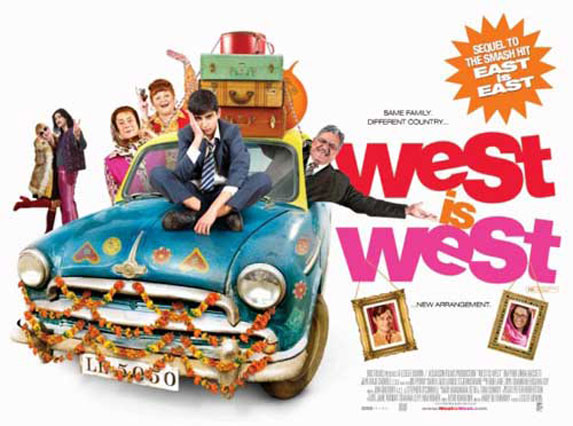 A decade after its hugely successful predecessor, Declan Tan encounters an entertaining but lightweight imitation second time around

As the long-awaited sequel to the 1999 breakout hit that was East is East, comes scribe Ayub Khan-Din’s West is West, a continuation of the Salford-set story of Sajid (Aqib Khan), jumping us forward five years to 1976. Except this time the plot moves the family (or at least two members of it, initially) out from the bleak chip shop and terraces of Greater Manchester to father George’s motherland, Pakistan.

We’re quickly reacquainted with the principal characters with, among other gags, the expected Pakistani/English culture clash jokes. There’s an abundance of those, but only occasionally do they feel out of place or forced. It has to be said of director Andy DeEmmony, that his control over the tone and the narrative, having taken over the reins from East’s Damien O’Donnell, is stamped from the get-go. He’s obviously at home with this sort of thing, having directed episodes of Father Ted, Spitting Image and Red Dwarf and it’s competently shot, perhaps even well done, but it doesn’t venture to try anything new. The same can be said of the script, which seems happy enough to take on some serious issues with a light-hearted approach, and not to get swamped by social commentary. It tells its story and that’s that. But at least this seems purposeful, because West is West is genuinely feel-good. So we’ll ignore some of the less-than-inspiring acting that the film opens with, as it really starts to pick up when we land in Pakistan, as everything before it just seems like a short meet-and-greet before the story proper gets it’s boots on.

Sajid is at odds with his Pakistani heritage, forced upon him by his old-school father George (Om Puri). His mother Ella (Bassett) is a little more forgiving. But the kids at school aren’t. All of these elements create a state of alienation for the pubescent Sajid as he begins to reject the traditions George has tried to inculcate in him and his family. Recognising this, George whisks Sajid off to Punjab, to the family home of his first wife (whom he abandoned for England 35 years previous), to try and correct the crumbling of his values.

Here we go on the old coming-of-age story-train. Yes it’s all pretty soft, bit soapy even, but it has it’s moments when George’s anguish to repent gets the better of him and the audience. And it’s all pretty much down to the performance from Om Puri who is as commanding as ever. George must fix all the wrongs and face all the things he’s tried to forget over the years since moving to England’s hallowed North. There’s a lot going on: He’s got a son looking for a wife, a wife looking for her husband, his English wife looking for her husband, another son looking for meaning, and a load of other troubles that begin to make themselves known when he settles back into home life in Punjab. Oh and he starts losing his son Sajid to the local sage’s influence, who takes him under his wing with more understanding and tenderness than George can manage.

Suffice to say, if you didn’t like the first film then there isn’t any reason to get in on this one. It’s largely much of the same, a lot of crisp dialogue coupled with some truly affecting family moments (but nothing on a level with the previous film’s physical abuse). The problems is just that it’s instantly forgettable.