Fresh off their tour with The Boxer Rebellion, Russell Mardell interviewed Billy McCarthy from Brooklyn’s We Are Augustines in the wake of their album Rise Ye Sunken Ships 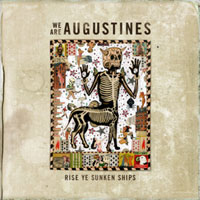 Brooklyn based trio We Are Augustines bring their album Rise Ye Sunken Ships to the world this June, and for singer/guitarist Billy McCarthy and bassist Eric Sanderson, it is the culmination of an extraordinary labour of love; a journey that has seen both suffer a collision of professional hardship and personal tragedy and yet come through strong enough the other side, to create a record that has started receiving the sort of buzz many long standing bands could only imagine.

As one half of the now disbanded indie rock band Pela, they had more than their fair share of music industry bullshit to deal with; label and management problems helping bring about the end of a band that looked to be really hitting their stride after 2007’s marvellous Anytown Graffiti. As the band broke, the personal tragedies hit; events dealt with in such raw emotion on the album, and the pair were forced to revaluate and question their calling. After much soul searching, McCarthy and Sanderson decided to continue, that they had come too far and given too much of themselves to turn their backs on it. The songs themselves had now been invested with an even greater meaning and depth, and perhaps, in the end, there could only be one choice for them. Reluctant to step back in to an industry machine that had kicked them in the teeth so many times, yet armed with songs they believed in so passionately, McCarthy and Sanderson slowly started aligning themselves with similar creative minds, people who shared their passion, and decided to navigate their own course to their public. Alongside producer Dave Newfeld they set to work crafting an album that would do justice to the belief, friendship and songs that had kept them together.

Anyone who has heard the songs already released on their website or been lucky enough to see their high energy, huge heart live performances know that with We Are Augustines nothing is left on the sidelines, every drop of blood, sweat and tears are there to see, that collective heart pumping emotion and immediacy through great musical story telling all brought to life in McCarthy’s astonishing vocals; a voice that could seep in to the soul as easily as it could break you to pieces. Now, with the permanent addition of drummer Rob Allen to their line up, and a growing wave of anticipation in front of them, We Are Augustines are finally ready to launch.

I’m constantly amazed by how many great bands seem to be coming out of Brooklyn at the moment. Is there as much of ‘scene’ there as that would suggest or is it just the massive diversity there that naturally attracts artists?

I’m not sure really. It’s a pretty large city and a large borough at that. I know there are multiple genres going on, and it’s hard to define a ‘scene’. Just when I think I’m aware of a lot of it, I find out about some underground cabaret movement or something… so yeah lots of music going on in BK most likely due to the impossibly high rents of Manhattan.

You travelled Europe busking many years ago, including time in London. Did we look after you?!

Yes you did! Me and my dear friend just up and left our miserable existence in our small towns and bought the cheapest one way red eye flights to anywhere we could. London was a starting and often ending point to our adventures. The tube was an incredible testing ground for our material at the time. We were routinely harassed by police and drunk kids, but we only sang our guts out more. My best friend made $300 one New Year’s Eve there, which of course bought another ticket to another music adventure.

How did your love affair with music start? Who were you listening to growing up?

I can’t figure out if all people have this or it is just creative minds, but I can remember music quite vividly back to the age of four or five years old. It’s one of the ways in which I can identify the period or year my memories are coming from, namely the 80s. My sister listened to Prince a lot. The radio was really playing the hits… The Police, Cyndi Lauper, Howard Jones etc. There were summer anthems and winter melodies that got in my bones. Those years were so big on choruses, a very hook driven time in music. Reggae was pouring out of car windows in my small coastal town, and surfers were blaring Black Flag and the Dead Kennedys as they waxed their boards in their front yards. It was a very rich musical upbringing. I was aware of the edgy aspect of counter culture music from a pretty young age. I was impressed at the time punk rockers took to paint band logos on their leather jackets. I could tell music was really important to people’s identities from an early age.

You clearly invest a huge amount in your lyrics; were you writing growing up, even before music came along? Any desire to do a Nick Cave or Leonard Cohen and write in other fields?

Yes I was writing pretty early. I was really big on drawing and illustrating my own little comics. The themes were basically making fun of authority figures and casting them in various bizarre scenarios. For example, making a math teacher a bull rider and the headmaster of the school the bull he was riding… stuff like that. I was very into making recordings with friends into a cassette recorder, doing impressions, making fake talk shows. I was also into breakdancing and making up songs. I do have plans for a couple of books; I’ve been talking to a writer friend in NYC about how to put them out properly.

Are you naturally attracted to great lyricists yourself in the artists you listen to?

I have always been interested in lyrics. One of the great things about having hippie parents that my generation enjoyed was a vast record collection in the house. I really fell in love with blues music. The lyrics were profound to me; drunkards, Jesus, cheating, praying, shit that made my generation’s music pallet look shallow! I stayed with those recordings forever. I then heard the greats from there, Johnny Cash, Dylan, Townes Van Zandt, etc. But my first record was actually from England, it was Never Mind The Bollocks I bought it myself when I was 12 because it was bright pink and looked very important up there on the shelf. I was like “‘God Save the Queen’… hmm I don’t know who this guy is singing about but he’s pretty serious!”

You are a band that really wears it’s heart on its sleeve, with Rise Ye Sunken Ships clearly being a deeply personal album for you, do you find that kind of openness cathartic?

It’s always just about reaching down as far as it takes to be honest, and working the music until you can stand behind it and be proud. So yes a catharsis takes place, but I always tell my friends that ask about how it feels to perform, that singing in a rock band feels like running down the street screaming your diary at the top of your lungs for an hour.

As part of Pela you had your fair share of crap to deal with from the music industry, and it’s been a real labour of love to get to this point, was there ever a doubt for you that you’d continue in another band?

Yes much doubt. Quite a lot. I think after spending summer after summer in a rehearsal space and always being too poor to travel or enjoy life consistently, one starts asking if it is a foolish endeavor or a true calling, like some kind of destiny. I don’t wish those questions on anyone. I agonized over them.

What can people expect from Rise Ye Sunken Ships? Do you feel any pressure to have any carry over from the Pela days or is it healthy for you to have a clean break?

I think you can expect us pushing ourselves past our limits creatively. That’s a mistake young bands make, they don’t take proper time with the second record. I feel we did. We grew a lot and there is a lot of passion and meaning in this record for us.

You’ve toured the UK recently with The Boxer Rebellion and you seem to have gone down a storm, what were your experiences of UK crowds?

Just lovely, lovely people. Hearty, hilarious and proud people. There’s tons of character, dimension and texture in the UK. I am so proud to have been able to sing over there with my band. I think I was acutely aware that we needed to go past the well-mannered obligatory claps for an opening band and have it out, give our hearts and sing from our gut. When I opened my eyes at the end of the shows they were clapping and showing their support every night. That meant a lot to me because so many of my heroes come from the United Kingdom.

Finally… I’m someone who loves a good bit of headwear but just can’t carry it off without looking a fool, what advice would you give someone on the best way to work a hat?!

The hat compliments the stuff on the insides baby… put that hat on and smile. Life is to be lived, and you are rocking it down the street in your own special way.

Russell Mardell is a playwright, scriptwriter and filmmaker based in the South West of England. Having trained in film production, he went on to write and direct the low-budget films Burn and Cool Blokes: Decent Suits. His theatre work has included the recent plays The Seventeenth Valentine and Freestate, both of which premiered in London. Silent Bombs Falling On Green Grass is his first collection of short fiction. He is currently at work on his first novel, has two stage plays ready for production and is in pre-production on his next film.

About Silent Bombs Falling On Green Grass: “Welcome to Mewlish Lull – the sort of town you pass through on your way to somewhere else without even noticing it exists. This debut collection of short fiction presents a bizarre portrait of a world just to the left of reality. In 12 stories and with a cast of oddball characters, through the most absurd of comedies, the darkest of nightmares and those quiet moments of madness that live within us all, Silent Bombs Falling On Green Grass takes us to a strange town where anything could happen… If only you could fit in. But sometimes being an outsider is the only way to be…”