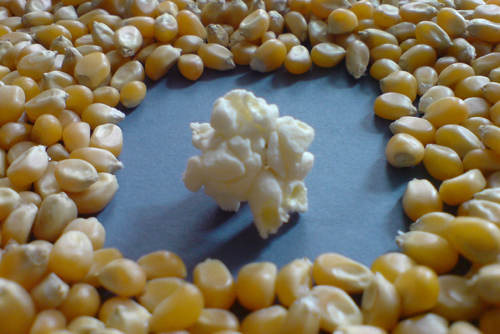 The old man stood in attention. But instead of looking straight ahead, he kept stealing glances at the girl seated next to him. The stolen glances soon became stares and the stare turned into glare. Soon he broke his attention and called the authorities to either make the girl stand up or leave. He would, under no circumstances, see the national anthem of his country insulted. All the while he shouted and gesticulated, the national anthem played on the screen. The girl stood her ground, being seated.

The latest practice of playing the Indian national anthem before every movie screening was mandated in the state of Maharashtra on Republic Day 2003 (January 26) and was slowly adopted by movie theatres nationwide. It was expected to be more successful than its previous 1980’s avatar. The national anthem played with the closing credits then. Though the Indian moviegoers didn’t make a sport out of running out of the theatre like Ray Bradbury’s fictitious Irish Anthem Sprinters, they were not very enthusiastic about standing up after a sit-down meal of Bollywood multi-cuisine.

Interestingly, this patriotic mandate coincided with the frequent power cuts across Maharashtra, the Enron backed Dabhol Power Company controversy and the increasing dissatisfaction of the public with the ruling power.   The fading out of similar practices across movie theatres worldwide, coincided with other major events. In the UK and New Zealand it died down in the 1960s. Playing ‘God Save the King’ before angst-ridden kitchen sink dramas increasingly made no sense. In the US, it faded out in the 1970s, lengthening of opening credits being one of the many reasons. It still continues at the movie screenings of US army bases though. There’s invariably someone shouting of “Play Ball!” and nervous tittering at the end of it. But no disciplinary measures are known to be followed.

However, the country where the ‘un-patriotic’ moviegoers are routinely subjected to abuse, violence and imprisonment is the monarchy of Thailand. The democracy of India, thankfully stops at shouting, lecturing and occasional mild shoving of clueless foreigners and ‘seditious’ desis.

And then there are lawsuits; against none other than the most (in)famous couple in Indian Politics: Laloo Prasad Yadav and Rabri Devi.They somehow forgot to stand up during the national anthem during the Republic Day celebration, 2002. A petition was quickly filed by an opposition party leader. After three years, a lower court ruled that, being seated during a national anthem, however seemingly repugnant, is not a crime against the law. Because the Prevention of Insults to the National Honour Act of 1971 says, “Whoever intentionally prevents the singing of the Indian National Anthem or causes disturbances to any assembly engaged in such singing shall be punished with imprisonment for a term, which may extend to three years, or with fine, or with both”. By simply sitting, one is not intentionally preventing the singing or the assembly from singing, the court says. It doesn’t say anything about causing moral outrage via indecent body posture, aka sitting.

The legality of sitting through the Indian national anthem in movie theatres might be in the grey, but when it comes to national anthem being played as the part of a movie, the Government of India wants the moviegoers to be firmly seated. “When the Anthem is played as a part of the film, it is not expected of the audience to stand as standing is bound to interrupt the exhibition of the film and would create disorder and confusion rather than add to the dignity of the Anthem.” A point entirely lost on the the moviegoers who routinely stand up to the national anthem which have frequently been part of blockbuster Bollywood movies made by popular directors like Vidhu Vinod Chopra and Karan Johar.

This knee-jerk patriotism gave rise to a hilarious scene when The Loins of Punjab Presents (2007) was being screened in Indian theatres. A laugh-out-loud socio-cultural commentary on the pseudo-patriotism and Bollywood-obsession of Indians, it’s about a New Jersey Desi Idol contest. The contest is finally won by an Indophile American by singing the Indian national anthem. The audience both onscreen and off-screen routinely stood to attention, a delicious double irony.

If this mandatory standing before the film is a minor annoyance for some (they come in knowingly late), an anachronism for a few (they grumble and slouch) and a pleasant reminder of school and nationality for the rest (who sing along lustily), it must mean something altogether different for Indian movie critics who have to show up at the movie theatres every Friday to face the music (pun intended).

Most of them unanimously agree that pre-movie patriotism is a particularly silly way of showing love for your country and comes in the same bracket as armchair nationalism and internet slacktivism, only done standing. Meenakshi Shedde (India Consultant to Film Festivals worldwide) calls it “Mehrauli farmhouse show-offy version of patriotism” after the crass nouveau riche north Indians, but ironically it was minted in Western India.

A standing ovation accompanied by a giant soda-popcorn combo, followed by the latest brainlessness (in 3D) completely trivialises the anthem itself, they say. But buying peace with a few minutes of standing, rather than arguing and spoiling the mood is a favoured and practical solution, though they believe it should be a purely personal choice, “like homosexuality”. That is why in a hypothetical situation when they are alone in the theatre, most of them most definitely will not stand up. “That would definitely be less criminal than playing the national anthem before soft-porn movies,” Mayank Shekhar (veteran critic, Hindustan Times) says.

Unlike sporting events when every spectator is first an Indian then an individual, in theatres people come not to be reminded what they can do for the country but what the movie can do for them.

Being the only democracy in the world with this public display of patriotism makes you think whether it is patriotism or are we just being Pavlovian, conditioned by our school days? Are Indians the most patriotic people around? Two World Values Survey, (1990-1992, 1995-1997) put India at No.3 and No.4 ‘Most Patriotic Country’ worldwide but the survey consisted of the average answers of high income Indian residents to a single question: “Are you proud to be an Indian?” The answers ranged from 1 (not proud) to 4 (very proud). But an extensive 2007 BBC survey, done in the wake of Dr. A.P.J. Abdul Kalam’s 2020 Vision for India, was surprised to find that 58% of Indians think that Indians themselves are the biggest obstacle in the nation’s progress, the most unpatriotic act of all.

As the TV channels open up, internet spreads out and the meanings of words change faster than Moore’s Law, perhaps the time has come to redefine this word which was coined in the early 16th century via a 6th-century word ‘patriota’ (fellow countrymen)?

But if we can’t call this patriotism, should we call this entertainment? That would surely be not out of place in a movie theatre? The myriad versions of Indian national anthem playing in movie theatres (a lot of them flouting the prescribed tempo and the 52 second rule with a lot of artistic flourish) might help to prove the point. There are government versions, lavish versions (helicopter shots of Indian soldiers on Siachen), minimal versions (animated national flag fluttering out of sync with the song), A.R. Rahman version (“with all the charming seriousness of a girl in a school play”), Indian Idol contestant versions (licensed Indian version of American Idol), latest political thriller version, instrumental versions and, the latest toast of the town, a sign language version performed by deaf and dumb school children created by Mudra Group, one of the leading marketing communication organisations of the country.

While this version brought joy to the hearts and tears to the eyes of many a viewer, it almost didn’t get made because the government officials thought it inappropriate of the deaf and dumb children to wave their hands and heads freely, while the decorum commands standing in strict attention without moving a muscle. Hopefully the children didn’t get to learn any of this.