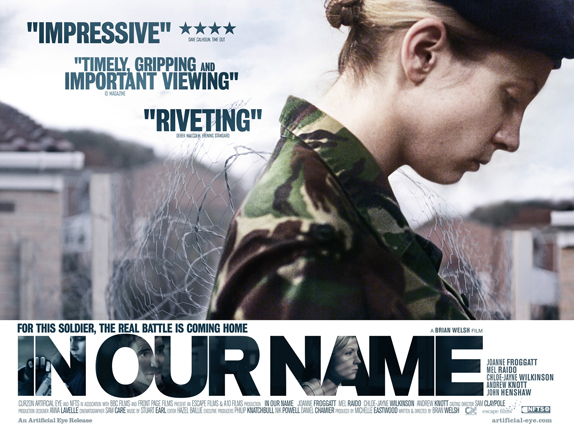 In Our Name is a contemporary British war drama starring a host of TV actors. Declan Tan assesses whether this works for or against the film 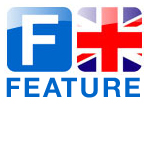 Brian Welsh’s second feature, starring those recognisable but unnamable faces from a spectrum of Britain’s most loved/hated evening programmes, manages all the feel and finish of some of those prime-time weekday dramas, though it’s a trait that both supports and diminishes this particular low-budget production.

On one side, it works to make its subject matter all the more disturbing in its seeming familiarity of appearance, as the themes that make up this film are the opposite of what you’d usually find in the midweek 9 o’clock slot – with the rare exception of John Pilger’s documentary The War You Don’t See recently.

Scripted and directed by Welsh, In Our Name tells the story of young mother of one, Suzy (Joanne Froggatt, Downton Abbey, Life on Mars), at the tail end of a long line of family servicemen and women. Even her domineering husband, Mark (Mel Raido, Red Cap), the Joe Calzaghe look-and-sound-alike, is a recent returnee from Iraq with suppressed memories. Now they and their friends are readjusting, some coping better than others, but none so cripplingly as Suzy herself, a drowning victim of post-traumatic stress and the occasional blurrily overexposed flashback.

Her struggle quickly becomes a public one as her paranoia overflows from her stressful work life in the barracks and into her cul-de-sac home life. As well as this, the already-strained relationship with her fragile daughter suffers further and Suzy’s frequent meetings with fellow soldier Paul (Andrew Knott, The History Boys, Spooks) begin to threaten the already-disintegrated sanity of her unmuzzled psychopath of a husband.

Sounds promising. Maybe. But despite the mostly decent performances, like those aforementioned soap operas, the dialogue is predictable, platitudinous and ungainly. The script is obvious and clichéd throughout, so much so that it jerks you out of any mode of intrigue that Welsh’s competent camera work has established. For this reason, it’s uncomfortable viewing at times. At other points the film does strike an intentionally executed chord: its portrayal of Newcastle suburbs; the paranoiac existence of the dehumanised mechanisms known as soldiers; the despair in every day before, after and during a tour of duty; and most saliently, the long-lasting effects of war on all involved.

Through the story and its telling, we begin to truly understand the impossibly difficult position soldiers (and their leaders) have put themselves into. In Our Name begins to touch on the point that servicemen are programmed into an inhuman form of existence, an ultimately unsustainable reality. But it doesn’t follow through.

Once again, the actual effect of the occupation in Iraq is seen only through the eyes of the invader. For example, the main reason for Suzy’s flashbacks is the murder of a young girl, which she feels is her fault, as the girl was forced to take supplies from Suzy personally. The local insurgents found out and murdered her, leaving her body in the street. In this, seemingly, the British are there coincidentally, and only to help.

In contrast, we have the archetypically savage Mark, who takes photographs posing with dead Iraqis, then claiming their uniform as trophy. But perhaps this is a disingenuous approach. In Our Name makes out that only psychopaths are capable of this behaviour, and only they take part, not your average soldier, therefore failing to deal with some of the more ambiguous questions raised. Welsh divides the army neatly into those that are the nutters, the hopeless lunatics like Mark and his mates, alongside the victims, like Suzy and Paul. For obvious reasons, this approach has proved a popular one in the past, not only in this country, in regards to making movies about recent invasions.

This is what makes Welsh’s latest feature a weak and dubious antidote to the pro-forces detritus that is usually found on screens. It is a passable but flawed attempt, that leaves you even more desperate for the devastatingly effective ‘Britons in Afghanistan’ tale Route Irish by Ken Loach, released earlier this year.