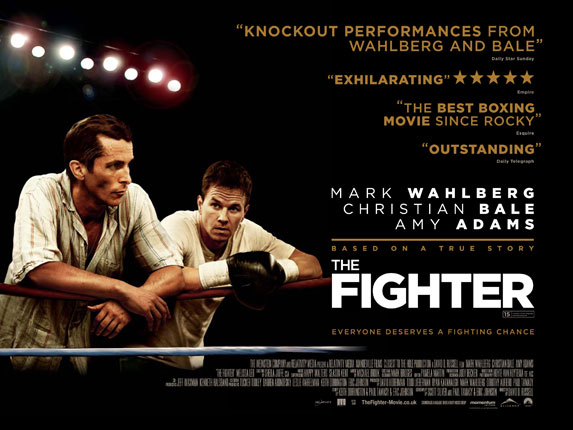 Is there more to the Christian Bale Method than weight loss and accents? Declan Tan views his ‘return to acting’

As unimaginative and uninvolving as it is, The Fighter still manages to (insert boxing pun) throw a few punches before (here’s another one) the final bell, though admittedly it’s identical to every other underdog boxing movie you’ve ever seen. It couldn’t be more predictable, even if you already know the tale of “Irish” Micky Ward, with the only element of this different to any other pugilistic picture being that there’s a crackhead or two involved. And a greedy mother. Which both seemed to have gotten this one fast-tracked into production.

You can imagine the pitch in the Paramount offices, boxer Ward overcomes all the obstacles of his trainer/brother’s drug addiction and troubled upbringing to become the unexpected welterweight champion of the world. With a built-in audience that either like a good Dropkick Murphys track, play Xbox or have seen Rocky, the makers of The Fighter seemed to have realised early on it wouldn’t require much thought or craft to make a success. So if you’ve seen the trailer then there isn’t really any need to sit in front of it for two hours, is all.

But the acting is what it needs to be. The same cannot be said for the lazy script which does its best to confuse with a choppy timeline that skips long periods with no explanation, even leaping over less successful moments in Ward’s comeback career and ending before the much-lauded trilogy of fights with Arturo Gatti.

Bale (playing Micky’s half-brother Dicky Eklund) does his best to squirrel it up a bit, maybe too much, his familiar sunken eyes and weight loss doing most of the work for him, though when we catch a glimpse of the real Dicky during the credits he does appear to have the role down pat. But it isn’t really enough to carry it. Thankfully though, the two leads don’t compete for attention when they are on screen together. Wahlberg keeps it to quiet frustration and restrained integrity as the hero, having spent around four years training to ‘become’ Ward, even having the two brothers live in his home. We can’t knock that part of the production.

We can however take a second look at that script, with shared blame going to Scott Silver (yes, 8 Mile), Paul Tamasy and Eric Johnson, leaving us thinking who actually has dementia pugilistica in this story? The film presents a kind of a black and white world where people are either bastards doing evil, selfish things, or basically noble and valiant. There are no shades of morality to question here. And it comes out in the dialogue and the narrative, it wears thin and somehow gets a little tedious in spots.

And instead of having you sneer sanctimoniously at the working-class of Lowell, Massachusetts and more specifically the family of Micky Ward, it actually treats the whole familial fighting thing with an almost refreshing lightness of humour, while at the same time allowing you to, without guilt, despise and detest the scummy side of the family. So it does have its good points. Other highlights being the reconstruction of live television, using the appropriate video to give it the feel of live pay-per-view fights, the commentary intact, as it gets the point across that it’s just as much about the people watching Micky and not just Micky himself, as all their hopes rest on his supposedly “Irish” shoulders. Then there’s also Micky’s entrance music: Whitesnake’s ‘Here I Go Again’. Yep. Pretty good.

So it’s not all bad, but with the telescoping of film-worthy material condensing down to the last ten or so years, we’re left asking if Lennox Lewis is the next in line for the Hollywood treatment. Don’t do it, Paramount. Don’t.