The IT Crowd’s Richard Ayoade steps to the other side of the lens. Chris Wood dives in 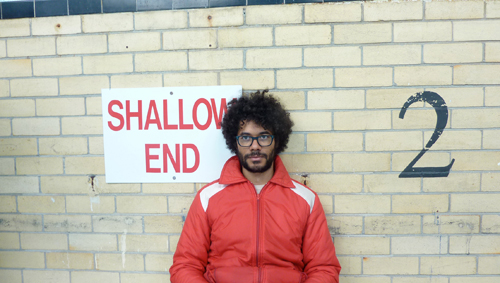 Submarine could be considered a film about communication, the rise and fall of the libido, teenage indulgence or just the desire to be noticed. Its sharpest early scene is when the teenage Oliver Tate imagines the impact of his death, with sobbing classmates and candlelit processions.

It’s a wonderfully sardonic way of puncturing teenage arrogance. That sense of doom, the striving to have one’s own perfection noticed, all balanced against a sense of barely existing. Adolescence is sweetly caricatured here, with even the indignities of bullying and name calling presented in amusing sequences where the briefly devastating effects can be clearly seen.

The love of young Oliver Tate’s life is shown, in all her sullen glory, lighting matches purely to drop them to the floor. This captivates the protagonist, an intelligent and awkward young man who shows mildly sociopathic tendencies that mingle with a bittersweet nature.

Submarine is an intelligent, moving and witty film. It has an inventive visual style that borrows freely but with personality. Each strand of influence is drawn into a storytelling style that holds the audience well, taking the dowdy colouring of everyday life and sparkling it up with unusual, inventive visuals.

In person, its director, Richard Ayoade, has a laconic and contemplative presence. His conversation is modest but sharp, geared more to amuse than cover himself with self-reverential ideas on his ‘vision’ or the many wonderful things that make him unique.

He describes Oliver as “somewhat cruel and mean spirited”, and that the title, is in his view, represents that the character is submerged is his own little shell, and that’s how he goes through life.

At least, that’s the definition one of the audience puts to him at a Q&A screening at Manchester’s Cornerhouse cinema. Ayoade agrees, balancing his self deprecation with ready humour. After some modest cracks about himself, he delivers well considered answers.

“It’s filmed as though through Oliver Tate’s eyes – it jumps around. So you decide where to put the camera and edit it depending on how he would like to be seen.”

When commenting on some of the book’s more objectionable content (the sexual activity of a 9 year old, for example), Ayoade cleverly defuses the situation.

“I didn’t have the lenses to do that,” he explains, when these matters are put to him. The film’s approach to sex is discreet and amusing, especially as it remains faithful to the subject matter without going to the same extremes.

“Can’t build up the density of hand jobs too early on,” he explains to general laughter.

Inevitably, his past outings as a director are mentioned. Most notable is his connection to the Arctic Monkeys, one of whom contributed to Submarine’s soundtrack.

“With a music video, the song precedes it and dictates what it is. It’s similar with a book, you’ve got something that exists beforehand. With a music video you’re bringing attention to a song, it can’t be wrecked by how badly you do it. With a book, hopefully you can disappoint more people, which is the aim.”

He’s too modest to talk about his own directing process in any depth. This partly adds to the allure of his project, and partly creates some frustration, as this is clearly a fascinating filmmaker. All he says of the shoot is that he as “surrounded by a team of lackeys, reigning in any dissidents. It’s a bit like a death camp, the way I run it.”

Ayoade is clearly a well studied cinephile, referencing Alexander MacKendrick’s book on directing (On Film-Making), now considered a classic. His writing approach to Submarine was heavily influenced by this, to argue from one character’s perspective and then switch this to the next. This explains how a book about a solipsistic teenager emerges on the screen as a surprisingly well balanced piece of drama.

His influences stretches from one of the Ealing greats to more surprising films.

“It was mainly influenced by Taxi Driver and Badlands, strikingly internal central characters and their narrative monologues. Also Truffaut and French New Wave.”

He speaks about his fascination with awkward people (“I can’t imagine why anyone would be comfortable with a social situation”), and that he found The Apartment and Woody Allen’s films inspiring.

This reflects his choice of material, which will continue with themes of individuality and social integration. His next project is an adaptation of Dostoevsky’s The Double, a novella about identity, introspection and eventual madness.

“I can’t imagine making The Bon Jovi Story,” he observes.

Chris Wood is the author of Sherlock Holmes and the Flying Zombie Death Monkeys, available from Amazon.