With the phenomenal success of Trainspotting (in all its various literary, filmic and dramatic guises), Irvine Welsh has moved from semi-literary obscurity to the centre of contemporary English writing. Trainspotting was one of those books that provoked people who hated reading to devour its three-hundred plus pages. This never happened with Martin Amis. But the real reason for Trainspotting’s popularity was lost amongst the inevitable, tedious furore about whether or not it glamorised drug-taking. The title of Welsh’s new book seems to play on that uproar – it’s so obvious that it’s got to mean something else. All of Welsh’s work, from Trainspotting to the new collection of stories in Ecstasy, is primarily concerned with the decay of England, the Orwellian political double-talk and the demand for conformity. It is concerned with the reasons for why people are compelled to take drugs, not the vapid posturing that occasionally goes with it.

“Glen felt that you had to party, you had to party harder than ever. It was the only way. It was your duty to show that you were still alive. Political sloganeering and posturing meant nothing; you had to celebrate the joy of life in the face of all those grey forces and dead spirits who controlled everything, who fucked with your head and livelihood anyway, if you weren’t one of them. You had to let them know that in spite of their best efforts to make you like them, to make you dead, you were still alive. Glen knew that this wasn’t the complete answer, because it would all still be there when you stopped, but it was the best show in town right now.”

In his foreword to the play script for Trainspotting, Welsh asserts that he writes because “other realities exist, have to be shown to exist.” As the above quote indicates, Ecstasy tries to fulfil this idea. Fortune’s Always Hiding, especially, moves into new territory for Welsh, concerning a Thalidomide victim and her lover who seek revenge on the disastrous drug’s marketing director. Constructed as a mystery story, the reader watches the various characters lives entwine towards a horrifying but inexorable conclusion. Welsh will probably incur politically correct wrath for his central protagonist Samantha feeling incomplete through her deformity, rather than being a well-adjusted young woman just like everybody else. Yet the anger that she feels does not show itself as self-loathing but as violence towards the corporate mentality, illustrating that the tragedy of Thalidomide only happened through greed. Not an original premise, perhaps, but these ideas need to be stated over and over again to counter the incessant governmental bullshit that tries to excuse such greed. 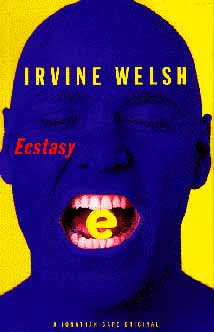 By contrast, the collection’s first story feels like a rehash of all of Welsh’s previous work. Lorraine Goes To Livingston is a bizarre tale about a TV personality necrophiliac with a strong Somerset accent and an obese Romance writer who suffers a stroke. Welsh seems to be engaged in self-parody here. The Somerset accent is rendered in his by-now trademark phonetic spelling, and there are interludes written in the bodice-ripping style of Rebecca the romance writer, which was a device Welsh previously used in Marabou Stork Nightmares. On top of that, the two nurses who have to look after Rebecca can only think about going to the upcoming Goldie gig. Welsh peppers the story with similar contemporary club references, but unlike his other work they seem to be mere namedropping rather than driving the narrative. The result is amusing but ultimately ephemeral.

The Undefeated is Ecstasy’s final and longest story, continuing Welsh’s love affair with Iggy Pop and returning to Trainspotting’s style of using first person monologue. This is what Welsh does best – the stream-of-consciousness style is dazzling at times, especially when the main character Lloyd describes being on acid or during sex. (Funny, that). Interspersed with the rebirth of Heather, a housewife who ditches her Dire Straits suburban husband and finds life amongst the rave scene, Welsh smoothly demonstrates his belief in the liberating power of dance culture. Most interestingly, he avoids the easy route of claiming utopia. If drugs can liberate you, then they can as easily ruin you. Lloyd and Heather only fully get together once she realises that Lloyd’s packed in drugs for a while. He’s realised something. This gives the story a peculiarly conservative twist – that the natural high of love is better than a chemical one. But in that context, Welsh makes a trite assertion radical within the E’d up environs of the club scene.

In all, Ecstasy shows Welsh to be restless, eager to take on new challenges in writing. Even when he stumbles, he still produces effortlessly readable prose, which uniquely captures the mood of contemporary England. Forget Will Hutton’s The State We’re In -get Ecstasy instead.

The definitive collection of Irvine Welsh links is at www.irvinewelsh.com