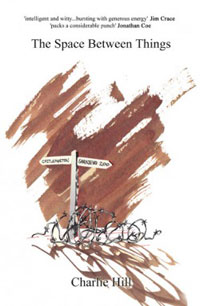 Charlie Hillâ€™s debut novel seems already to have been pigeonholed as a love-story, a certainly tragic one, between its narrator, Arch (a character who has already made appearances on the independent literary scene) and Vee, the counterpoint to Archâ€™s solipsistic, inward-looking existence.

Set in the early 1990s, the novel begins at a party in Birminghamâ€™s alternative district of Moseley to celebrate Thatcherâ€™s tearful resignation and the hope of upheaval that followed. Arch encounters Vee for the first time.

This inchoate, anti-romantic relationship however, seems merely to be the axle that the novel wishes to rotate its wheel of ideas on.

And so begins their intertwining. She resists his placid Beat-quoting and Bukowski-infused conversation to confront him on his easy, ready-made beliefs as to how the good man lives, and how one ought to connect with the outside world. From early on, his reading, his knowledge and his ideas represent the kind of universal influences still batted about today, along with their relation to the 90s youthâ€™s view of history: that seemingly nothing came before the Beats, before the 60s, or before the current uprising, a cycle that finds its repetition in all youth movements since.

This taking of universal influences â€“ still popular in equivalent crowds today â€“ lends an allegorical slant to Archâ€™s false journey of the self. Locking in contemporaneous â€˜End of Historyâ€™ sloganeering and the â€˜End of Politicsâ€™ chat, weâ€™re offered an insight not only into Archâ€™s psyche but also Moseleyâ€™s easy-answer, misguided disconnection from the world.

Hillâ€™s depiction of the place is written as a kind of Brummie precursor to Londonâ€™s boho, hipster-glamourised Hoxton of the noughties, where ostentatious angel-headed hipsters fart around at changing the world, playing at making a difference, all amongst the green smoke, chemical raves and mute squeals for revolution. And Arch, though he keeps an aloof distance from the â€˜believersâ€™, is sucked in when Vee calls him out on his go-nowhere, existential ennui. After a night of quick connection and zappy sex, she leaves him and returns to Yugoslavia to cover the ongoing war there, leaving him with the impression that to have her, he has to move his ideas forward.

Meantime, Arch endeavours to make more of his position in this Moseley whirlpool of ideology and revolution, throwing himself into the inbred vortex of poseurism, becoming a â€˜believerâ€™ in the cause and evangelical in his limited concepts. He becomes involved in the street protest movement, his false and forced awakening coming at the weeklong free rave at Castlemorton, his transformation induced under the leadership of the volatile Stripe and his vacuous girlfriend Sorrell who epitomises all that he wants to avoid in his newfound, self-satisfied belief of making a stand against â€˜The Manâ€™.

He gets into the techno-rave scene and finds intellectual and emotional solace in the engirdling ideas of fellow protester Igâ€™s civil disobedience vs. Stripeâ€™s brand of direct action â€“ revelations that he thinks will change Veeâ€™s wilted view of him. And so he busies himself with the self-serving, delusional journey from lugubrious impassivity to the â€˜anything is possibleâ€™ system of beliefs spouted by the movement. He is convinced by the likes of Ig and Stripe of the real, genuine personal responsibility the individual has, slotting neatly into his new box of ready-made views.

And when Vee returns, she furthers his â€˜almostâ€™ connection to the outside world, he wants to show her how he has changed, how he has been brought out of his near-sighted slumber, without realising he has merely moved into a different kind of ideological somnolence. It seems Hillâ€™s charge here is that it is just another easy out to go from one kind of complacency to another, easy in these communes of self-belief to continue living within this pipe-dream.

But this ideological transition is not as prosaic or didactical as I seem to let on. Hillâ€™s style is bright with humour, he has a natural ear for rhythm as well as a depth of slang both playful and unobtrusive, slang that has seen the novel compared with Welshâ€™s Trainspotting, a book overtly referenced by Archâ€™s culturally voracious squat-mate, Mike. At first, Archâ€™s narration reads, at times, as an updated Burroughsian Junky, though (initially) softer in its drug of choice, the melange of characters indulge in whatever they can get their hands on. As Archâ€™s ideas begin to twist into his zealous evangelism, the prose takes on a journalistic intensity, albeit at times a little too pedestrian in its delivery of real events. But these instances are rare, and Hill handles Archâ€™s clay-footed leap of consciousness and ensuing distress with remarkable pacing and emotion.

The central crux of Archâ€™s futile journey embodies a very real search for answers. And Arch seems to think he has found them, though they are as illusory as his relationship with Vee, which ends, as made clear in the opening, with loss and stillness. But Arch holds onto his ideas for as long as he can, this impermanent state of mind that has a ragged edge when bordering on a complacent sense of conviction. And this state of mind, no matter what side you are on (if there even are sides) is merely that, a momentary belief in a momentary something, no matter how poor placed or how convincingly argued, and it all becomes a â€œshit-eating grinâ€ of complacency and self-satisfaction.

Hill deconstructs the ideologies through his characters, each seemingly representing one way or another, and pokes a stick at the inward visions of a hipster crowd like that in Moseley.

Perhaps it is over-simplifying the complex and enigmatic character of Vee, who is never really a part of the protest scene, to say that she is merely the opposite of the Arch. But it is this â€˜pipe dreamâ€™ of changing the world that brings these characters together, albeit from differing points on the Moseley political spectrum. Vee, with her â€˜Endless Inquisitionâ€™ and outward view vs. the movementâ€™s limited â€˜Finding, Latching on and Believingâ€™ plays out as a battle of ideas that has no feasible winner.

It is easy to see why The Space Between Things has been viewed as a love story (the coupleâ€™s penchant for Velvet Underground brings to mind the song â€˜I Found A Reasonâ€™), but Vee, Arch and the rest of the misfit gang are narrative tools for Hillâ€™s multifaceted scepticism. It is a bleak tale (for the reality is bleak) that can relate directly to the intermittent and possibly futile calls for uprising within protest movements today, its questions true to the questions that face all protest movements, particularly where, like here, few seem fully prepared to put it all on the line. Though that doesnâ€™t mean Hill doesnâ€™t hope we/they do:

â€œWe don’t live in a world of simple answers and I’m wary of those who think we do. We don’t have it in us to createÂ a utopian society, in which the freedom of the individual is not subject to any limitation and the needs of those who can’t provide for themselves are met. The way in which we interact with other individuals and other communities is characterised by compromise â€“ moral, intellectual, emotional. As a species we donâ€™t do intellectual purity. We are flawed. We do fudges and suck it and see.

Acknowledging that this is the human condition doesn’t mean that we should give up on the idea of change â€“ or changes â€“ for the better. I just think we’ve got to accept that striving for improvements in the way in which we organise ourselvesÂ is an ongoing and ultimately frustratingÂ process. I think it all comes back to that Beckett line about trying again, failing again, failing better. And I think that on a practical level, if we accept our limitations, we have to be prepared to work withÂ  â€“ and not just against â€“ what we’ve got, however unsatisfactory that may beâ€¦â€