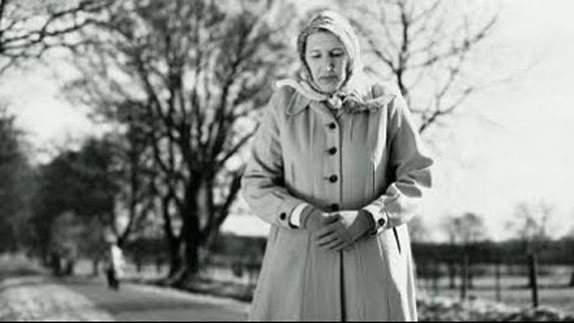 Gillian Wearing has a history of getting people on camera and making them open up. In the 1990s, she placed an advert in Time Out asking people to “confess all on video”. Now, she is doing it with a group of people – the focus still on individuals and their pasts, but in feature-length documentary form. The result is an anaemic piece of work, simultaneously annoying and manipulative.

The premise for Wearing’s debut feature is another advert placed in publications all over the country, something to the tune of: “anyone who wants to appear in a film, contact me”. And Self Made begins somewhat promisingly with a long tracking shot of a disgruntled gentleman seemingly on the edge of a breakdown. We find out more about him later. This is followed by a definition of method acting which flashes up to inform us on what is going on. We then meet a method acting coach, the enthusiastic and slightly new-agey Sam Rumbelow. We are also introduced to a group of seven people, all, we are told, with interesting or affecting back stories. And this is where the trouble with Wearing’s documentary begins.

As it unfolds, the group go through a kind of therapy in the method acting class, under the harsh lights of some nondescript warehouse. Here they act out scenes somehow related to their lives, their worries and their pasts. They are then given the opportunity to film their ‘end scenes’, which are professionally shot, with additional actors and an entire crew to produce a glossy, stylish bit of film. For now we will ignore the fact that none of these really work (with a few of the candidates even cut out of the film altogether, and without explanation).

Unfortunately, Self Made is the kind of insipid documentary filmmaking that seems to say that people are not ‘real’, ‘human’ or worthy of compassion until some artist puts a camera on them and makes them discuss their distressing experiences, then making them cry on screen. Is this for our entertainment? Because they certainly don’t seem to be coping any better with their problems by the end credits.

Wearing also seems to be saying that what we watch is immediately ‘good acting’ when someone manages to shed some tears. To cry is not to act. Are we to think that a distraught person releasing a solemn tear is art? Or even entertainment? Or perhaps this is Wearing’s point, to point out the mixture of reality and art for this reason; the mere ability to well up when the director shouts “action”. This might be true if the film did not carry with it this swagger of arrogance and self-righteousness.

The first of these ‘end scenes’ to be shown sums up this problem. A girl in her early-twenties drones out some Shakespeare (we are supposed to be impressed she remembers all the lines): King Lear on a moodily lit stage sat around a dinner table, with some hammy fellows supporting her. The scene wears on, until we finally reach that moment. The teardrop comes and rolls down her cheek. Bravo.

Other end scenes involve a seriously disturbed but discerning and genial guy called Asheq, who decides his scene should be about kicking a pregnant woman in the gut. Then there’s the one with the cringe worthy depiction of Mussolini, hanging upside down after he’s been executed. His scene lasts for about three seconds. And that is it. Oh, and the guy who used to get bullied. Now he is a belligerent and bitter man-boy. Then there’s another one with the middle-aged woman, Lesley, who actually comes to be the heart of the whole documentary, but her film also fails to blag any emotion. Who knows what happened to the others. Must have been especially tasteless.

The problem is not that we don’t feel for these people, of course we do, but that Wearing tries to manipulate us into a reaction with such cheap trickery. So just look out for those ads asking you to “confess all on video”.