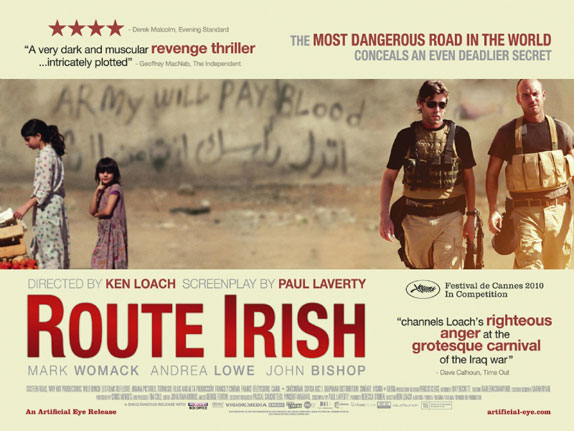 Often something of a cinematic conscience, Ken Loach turns the camera to the Iraq war. Declan Tan reviews

Ken Loachâ€™s take on Iraq was always going to be one to look out for. AfterÂ In Our Name,Â Green Zone, The Hurt LockerÂ and a slurry of others sent hot and steaming down the pipe of supposedly cantankerous cinema, Route IrishÂ is a welcome return to veracity that has undoubtedly been amiss in previous war-film efforts. This isnâ€™t to say that those other films arenâ€™t sincere. Surely their respective producers think and believe the things they project up onto the screen, supposed wisdom in a blindfold, itâ€™s just that no one as qualified or well-informed as Loach has bothered to make a mystery/thrillerama like this, until now.

Itâ€™s immediately obvious. Loachâ€™s is the film thatÂ Green ZoneÂ never could be; brash, confrontational, and with more than a Wikipedia source of research. Coming from the pen of Loachâ€™s oft partner-in-crime, Paul Laverty,Â the script takes on adversaries others have shied away from in the past, as it reaches upward to the source of profit and other reasons for invasion, rather than lazily kicking stones into the faces of those at the bottom of the pile, the soldiers. While other films are looking over their shoulders to see whose jackboot toes they just farted on, Loachâ€™s rolls dead ahead not even casting a look back to see all the faces heâ€™s left in the methane smog. And there are plenty coughing up the guff.

The plot follows ex-sasÂ Fergus (Womack) as he investigates the death of his childhood friend and fellow mercenary, Frankie (Bishop), killed on the deadly stretch of road, â€œRoute Irishâ€, that joins the Green Zone and Baghdad Airport. Fergus slowly pieces together the reasons for Frankieâ€™s untimely demise, through a furied investigation of private security contractors and big business, putting Skype and mobile phone videos to use like never before. (These technologies even become central to the plot.)

That the story is so routinely executed leads one to realise that this film is simply an excuse for an essay, on modern warfare, on moral ambiguity, concerning the Middle Eastern invasions. Not only satisfied to unglove corporate hands fiddling for profit, it works to question the audienceâ€™s complicit involvement in the subsequent revenge Fergus takes out on those culpable, questioning whether we too would succumb, becoming either a victim or hero of circumstance in the ensuing vengeance. Through this, the audience is implicated in the crime of torture. Though Fergus does it out of despair, a regrettable vendetta, because he knows that he is lost inside, we, the audience, enjoy the heavy justice he takes on those responsible. At least a little bit, be honest. Well, for a while, at least.

Itâ€™s these side dishes of commentary on the human condition, done well in the context of the surrounding images, that compliments the main of objective of honest storytelling, elevating this above the standard Iraq/Afghan â€œanti-warâ€ film fodder that canâ€™t help but preach an emptiness both obvious and pointless. The characters here are well-fleshed out and real, not caricatures or propagandists, and the performances well-rounded.

But to call it important is a stretch.Â Route IrishÂ is the work of a director trying to say things more easily said in other, less subjective or interpretive mediums. And the argument is also there, that it is too late for this kind of film to have any effect, working more as a readerâ€™s letter sent in by a concerned citizen that got lost in the post for a few years. Nevertheless, Loachâ€™s film marks a significant turning point in the way these two invasions are dealt with in cinema, (though it isnâ€™t likely that many other filmmakers will follow the same route) that the war is the Iraqisâ€™ tragedy, no one elseâ€™s, not the Britâ€™s or the Americanâ€™s, only the Iraqisâ€™. One million war dead and countless others lost. This is the core of Loachâ€™s film. Leaving us with the question: Is this the first honest British film about the invasion?