Ronald Dworkin’s latest book attempts to engage with moral truths and the pursuit of a meaningful life. Jacob Knowles-Smith reviews 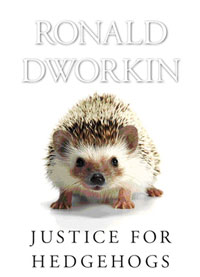 No mention of Professor Dworkin’s latest work, Justice for Hedgehogs, can pass by without the following:

“The fox knows many things, but the hedgehog knows one big thing”.

So goes the old fable. The hedgehog, or cat, in some versions, knows his one defence but the fox, even with all his tricks, is torn apart by dogs. Dworkin’s foxes are Sceptics and Nihilists; his hedgehogs, however, are people who believe in one big thing: that the good life and living well, justice and morality should be viewed through a holistic perspective.

Justice for Hedgehogs explores all of these elements and more; how do we come to moral truths? How we know these to be truths? What responsibilities do we have? Any book of philosophy worth reading provokes questions, and after reading this book one could go on asking questions like these of ourselves, with guidance from Dworkin, until we have blown the examined life out of all narcissistic proportion.

Indulge me in a hypothetical argument: It is a moral truth that more people should read books authored by philosophers like Ronald Dworkin than those by people like Alain de Botton (or Alain de Bum-Bum as Will Self has rendered me unable to otherwise call him) because the latter add nothing to the pursuit of living well and reflecting on the good life in a meaningful way and, furthermore, that they are the philosophical equivalent of the novels of Martine McCutcheon and Katie Price. How would one, hypothetically of course, come to such an argument? It would depend on one’s education, personality, tastes and background; moreover, it would rely on a wider conviction that philosophy and art come from a deep wellspring and are integral to the good life.

Clearly the example above is slightly facetious – even if the argument behind it is an important one. It does, however, raise another point: could a layperson – of the “ordinary view”, as Dworkin puts it – tackle Justice for Hedgehogs? Well, yes. The book is, as would be expected, full of philosophical terminology but Dworkin has an extraordinary gift of inserting either direct or more discreet explanations throughout the chapters, which, at the start of each, are themselves summarised. It is also worth remembering Dworkin’s early assertion that, despite the necessity to discuss other philosophers, the book is not a book of what others think but rather what he thinks.

Naturally many people will always say that the good life should be lived not pondered about; but living well is not having everything you want and the good life is not one exclusively of pleasures material and flesh, nor is it an Aristotelian one spent in full-time contemplation. Living well is living with dignity and with a respect for other people’s lives; striving for a good life, more than any attainment, is what should count. If a scientist never produces any hard evidence for his theories, has he still lived well through their pursuance?

Of course there are those that take comfort in religion and have no examined life and live well only to the extent permitted by whatever celestial power they bow their heads before – but they, as Dworkin says, have not lived well if they have not at least considered the motives behind their religious instincts. They are no better than those who, like our foxes, default to scepticism or believe that nothing matters at all – but such people often forget to consider their own conclusions with the same degree of examination with which they came to them. These lives, Dworkin proposes, lack dignity because they lack self-respect, i.e., there is no self-respect in living for the dangled carrot and blind assumption of an afterlife – where any validation is, by definition, after the fact.

Answers on a postcard.