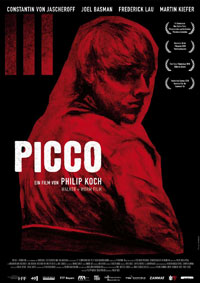 When you watch Picco you get the feeling that former-critic and one-time film student Philip Koch knows his stuff. In his feature debut follow-up to the award-winning short Lumen, Koch skilfully blends the theory and artful subtlety that seems to have informed his Nouvelle Vagary from criticism to filmmaking.

Starting out like a German rendering of Audiard’s hit Un Prophète, the story drops us into the claustrophobic jail hell of a youth detention centre where we’re immediately introduced to our four leads. Chatting over the small table centred in their room is Marc (Frederick Lau), the most vicious and unrelenting in his tyranny and Andy (Martin Kiefer), the somewhat intellectual rebel who finds it easier than most to express himself in terms of his ejection from civil society. They excitedly discuss what they’ll do when they get out, often hinting at a return to the life of crime, a theme the film deals with throughout. Also in the cell is the depressive, sometimes suicidal Tommy (Joel Basman) and refusing to join in the conversation is our antihero ‘picco’ (meaning newcomer), Kevin, who soon gets wise to the fact that involvement in the debasement of prison life is unavoidable and inevitably devastating.

We’re steadily introduced to the quiet violence of prison life in sequences that drip with authenticity, afforded by the film’s setting in an actual disused detention facility. At first, Kevin struggles to adapt to the confined life in the borstal, psychologically and physically hectored by his cell-mates and the other prisoners, he struggles through the first days; they watch on and laugh as he cleans his teeth with a soiled brush; they steal his smokes; feign sympathy by giving him incorrect answers in class; call him “faggot”, and so on.

The terror slowly builds. At regular intervals, long tracking shots follow our boys one by one around the yard in moments that recall the impending doom of much classic horror cinema, The Shining being one prime example. At the end of one of these steady-cam shots, Kevin finds refuge in another prisoner who finally gives him a cigarette. He quickly becomes friends with the feeble-looking Juli, who is just another victim of constant abuse. When the others find out Juli was picked up for hustling, Kevin must choose between his forsaken friend or acceptance into the main group, a process during which he is repeatedly asked: “Are you a victim or what?” And this is the reality of the enclosed world that Koch reveals, a world where you’re either a victim or a tormentor, but actually you’re both.

Through this narrative device Koch builds up more and more layers of meaning in this seemingly straightforward story. The walled-in world of our inmates comes to reflect the outer, and vice-versa, with Kevin coming to the elusive realisation that individuals find themselves picked-on because every other detainee is out only to protect and help himself. But he cannot stand by his beliefs of dignity and selflessness, and this he realises when he fails Juli, doing nothing when he is raped in the washroom. After this, Kevin thinks he can become more assured in his values, we see him spurn the influence of his fellow bullies, with occasional violent that bursts like an abscess, until finally, in the last third of the film, he surrenders to his selfish survival instinct and becomes what he despises.

As the subject matter demands, Picco is difficult viewing. With echoes of the same disturbing events that make up Alan Clarke’s work on similar subjects (Scum and Made in Britain), you know that you’re in for a harrowing ending. And the final act is a long, unsettling one.

Tommy becomes the centre of a prolonged session of abuse, physical, sexual and emotional, with his three cell-mates deciding to force him to suicide by hanging. They cut him, beat him, violate him with a toilet brush, before tightening the noose around his neck and baiting him into finishing it. But he refuses, forcing one of the others to do it for him.

Despite its affecting conclusion, Picco is not merely another exercise in disturbing storytelling; it has an original visual style that demonstrates Koch’s eye for both a filmic reference and a unique shot of his own. In one particularly effective visual quote, we see a marijuana-filled boot swinging from window to window, conjuring Jean Genet’s Un Chant D’Amour. The cold greens and greys that colour the many memorable shots work to invoke a permeating sense of alienation in the boys’ isolation that survives through the film’s entirety. And these subdued touches certainly make for a promising writer-director debut coming out of Germany at a time when Hollywood-looking rom-coms and tepid dramas seem to be order of the day, amongst some otherwise admirable work such as Koch’s.