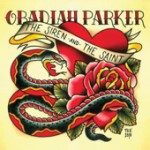 Famed for his apologetic, unplugged cover of Outkast’s ‘Hey Ya’, Obadiah Parker is the adopted name of Phoenix busk-rocker Mat Weddle, who apparently popped in at the Howard Stern show, I’m assuming to talk about his addictions (now that Stern’s on pay-radio, isn’t it hilarious watching him squirm while trying to get Leno audiences and everyone else all caught up?) On his first full-length, Weddle’s got a Train-like backing band spouting shuffling, angular, Dave Mathews-ish faux-jazz, over which he croons/sighs in a vague cross between Robert Palmer and Amos Lee. What’s most amazing here is that it’s all DIY; the production makes it sound like Weddle couldn’t make a single move without the consent of such-and-so bloated New York AOR hack producer. Nothing wrong with the songs, either; apparently the guy simply has the ideal DNA for urban dinner-jazz-pop.