Eight years after One Hour Photo, music video director Romanek steps back in the ring with an adaptation of Ishiguro’s much-touted novel. Declan Tan reviews 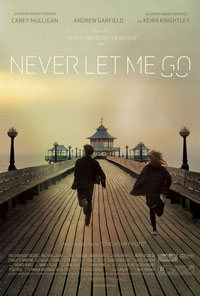 In 1952, the breakthrough came. All disease and illness were cured, all disability wiped out. By the 1960s, age expectancy reached over 100 years.

This is the opener for Never Let Me Go, a love-triangular pseudo-sci-fi-drama in which mankind undergoes the dystopian treatment in an alternative history, where science and technology have made the simultaneous leap to put an end to all (physical) human suffering. This, we are shown, is achieved through harvesting body parts and vital organs, taken from mild-mannered clones, to transplant into and onto the broken bodies of the higher strata of society. By now you could be tempted to think Brave New World or possibly Gattaca, and ponder that we might already be well-acquainted with this plot.

Or at least we have seen these ideas before, and more proficiently explored. And that’s the main issue with Romanek’s latest, adapted for the screen by Alex Garland (The Beach, 28 Days Later, Sunshine) from the cult-ish 2005 Kazuo Ishiguro novel of the same name, though the premise is ripe with possibilities – questions of ethics and what it means to be ‘human’, questions of science and destiny, questions of soul and suffering and so on and so forth. Yet what we are presented with is a semi-complete dystopian vision, a world half-rendered by Garland’s script, and a sequence of scenes ironically devoid of any human emotion or completion of its big concepts.

The film opens in the 1990s with our 29-year-old heroine, Kathy (Mulligan) the carer, over-seeing a ‘donor’ ‘donating’. She delivers a solemn voiceover filling us in on her dulled recollections. We flash back to 1978, a twee-looking boarding school where the children talk through their noses and their starchy uniforms stifle free movement and free thinking. Introduced are Kathy’s classmates Tommy (Garfield), who she quickly falls in love with, and Ruth (a sedate Keira Knightley), her then-best friend. As we learn more about life at Hailsham school, a new teacher enters the fray and begins to undermine the control held over the children’s pre-determined fate. We quickly begin to realise that there is a darker side to the apparently parentless joy of regimented school life under Miss Emily (Rampling) with episodes showing playground bullying, their inability to think outside their boundaries and chorus-singing of mindwash anthems. But when the mystery of their purpose evaporates (after the first 40 or so minutes) we are left with little reason to hang on, and this is seemingly what the three protagonists are thinking, as they fail to kick up a fuss or do the human thing and rebel. But Ruth and Tommy make a go of it while they’re young, destroying Kathy in the process, leaving her to watch them from afar as they share their first kiss.

When the film jumps forward to 1985, not much has changed. Where the three used to inhabit a school they now live in ‘The Cottages’. They sit around with blank faces, impersonate characters from American television, go on day trips and exist in a kind of ennui on their next step to ‘completion’ (Ishiguro’s euphemism for death). On one of these road trips Ruth glimpses what she thinks might be her ‘possible’, the person for whom her organs and limbs are supposed to be harvested for, yet this event is passed over without much thought or delicacy. The subject of the wider society is also missed, as a short scene in which the trio shyly orders some food at a café merely demonstrates another example of the film’s self-imposed limits.

Frustratingly, the clones simply accept their fates without displaying any trace of humanity; they sink into misery and merely acquiesce to their destinies. And this seems more of a defect on the film’s part rather than an intentional comment on human nature. So, unremarkably, throughout the three decades that the film spans, the three friends experience almost no progression or development; they are static, which is not aided by the type of wispy acting on display from the three leads, and who could only fall flat as a result of the flaccid dialogue anyway.

Also a tad irritating is that Kathy, Tommy and Ruth talk of nothing but their situation, occasionally of ‘love’ but without ever showing it or saying what they seem to think it is (this being another opportunity to delve into the aspects of perceived and actual love) but again, this is brushed away, glossed over with stereotypical reflections. Yet the most implausible aspect must be the fact that the world they live in does not seemed to have changed at all, apart from people living longer. Perhaps this is the film’s intention, to reveal only the singular perspective of Kathy. Even so, it makes the film feel somehow incomplete. And Kathy’s world that Romanek and Garland have recreated is empty and bereft of humanity, the core of Ishiguro’s admittedly overrated book, in a place where man’s body is elevated in meaning and significance in light of his predicament, making it all the more ridiculous that these three fail to deal with anything, waiting years to find out the details of their fate.

Never Let Me Go also suffers from another massive disconnect throughout; a disconnect between its style and the content of its script. Warm hues carry an incongruously somber tone, giving an unintentional sense of discomfort, the sign of a project that does not know its purpose or its meaning. And in an attempt to wrench in some feeling to the one-note script work, the soundtrack plays out melodramatic strings and trite crescendos, telling you when and what to feel, when perhaps silence would say much more than the manufactured emotion.

And to compound these inconsistencies, Romanek seems to possess the extraordinary talent of finding the most conventional and tediously orthodox shot possible for every moment, with the film evidently too busy getting on and telling its tale to get any ideas across visually or verbally, leaving the possibility that perhaps the only cliché avoided here was to not save the twist for the end.

When the inevitable conclusion does arrive, you’re left trying to pick out the pieces that might have meant something. Is it all some treatise on the ramifications of stem-cell research? Who knows. Is it a religious bit of work, blending in (accepted) notions of the soul against man’s concept of law? Probably not. An intriguing concept that at first seems interesting is instead taken for a ride where only the end is sought, and not the journey. So by the time we hear the last grating after-thought of a voiceover trying to tie things up nicely, with too many aspects of the story taken for granted and with social context forgotten, the whole thing sounds like A-level metaphysics, bordering on self-parody: “We all complete. And somehow it never feels quite long enough”.