Greg Houle reviews Jason Stearns’ troubled history of the Congo Dancing in the Glory of Monsters: The Collapse of the Congo and the Great War of Africa. 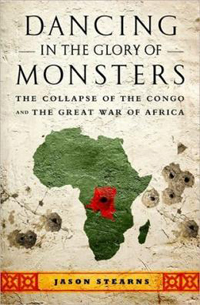 In one of the final chapters of Jason K. Stearns’ significant new book Dancing in the Glory of Monsters: The Collapse of the Congo and the Great War of Africa, the author writes about a battle in the central Congolese city of Kisangani during what is now known as the Second Congolese War in 1999. The battle, which was actually fought between the Ugandan and Rwandan armies – Congolese troops were not involved – resulted in the death of hundreds (if not thousands) of innocent Congolese people. During a conversation with a pastor named Philippe, whose son had been killed in the crossfire, the author asked whom he blamed for his death. “There are too many people to blame,” Philippe tells him.

It is a succinct statement that, nonetheless, aptly explains the enormous tragedy that is Congo. On a continent famous for its stories of calamity the Congolese tale is perhaps the saddest one of all.

This enormous country, the size of western Europe, has always had a habit of seducing foreigners. From David Livingston and Henry Morton Stanley, who explored its vast and deadly jungles in the 19th century, to Belgium’s King Leopold II, who brutally ran it as his own personal fiefdom (despite having never visited himself) until the early 20th century, outsiders have always had vast influence over Congo. And, as Stearns points out, this hasn’t changed much over the years.

Since 1996, when the conflict between the Tutsi and Hutu in the aftermath of the Rwandan genocide seeped over the border and started what is now known as the First Congo War the result has been an enormous and epic calamity – the size of which the world has not seen since the Second World War. Some reports claim that as many as five million people have died in Congo as a result of this complex conflict involving the armies of no fewer than nine governments and well over a dozen rebel groups. The vast majority of the victims of this war – now sometimes called “Africa’s World War” because it has drawn in so many surrounding nations – have not been killed in combat but instead have died from preventable disease and famine as a result of the fighting. In addition to the staggering number of casualties, hundreds of thousands of women have been raped as a brutal instrument of terror.

How does one explain such a tragedy? And how exactly does such a tragedy fly almost completely under the radar as it has in most of the rest of the world?

Stearns, an American who spent a decade in Congo working for the United Nations and local human rights organizations, has made a valiant attempt at answering these daunting and difficult questions. He probably understands the complexities of the Congo conflict better than most. But, as he adeptly points out in the book, the brutality of this war – stories of rape, cannibalism, and people being burned alive is most often the focus of the conflict’s paltry media attention – often reduces what is happening in Congo to mere wanton savagery without context. The Congo becomes the very setting of Joseph Conrad’s Heart of Darkness where people engage in brutality without cause.

Stearns has worked tirelessly to show us that this isn’t the case at all. He interviewed countless people – soldiers, government officials, and others – to get to the heart of this vastly complex and multi-faceted conflict. While there are no simple answers here, if he had to give a single raison d’être Stearns concludes that it is ultimately Congo’s lack of visionary leadership that has done it in. A situation largely born out of centuries of politically destabilizing forces, from the slave trade to its hasty independence from Belgium to the brutal three-decade rule of Mobuto Sese Seko who sucked the country dry. This vacuum of leadership has led other nations – mainly Rwanda but also Uganda, Zimbabwe, Tanzania and others – to exert their own political will on this land rich in mineral wealth. The result has been the birth of numerous rebel groups within Congo that have been introduced into the morass of foreign influencers and corrupt puppet governments. All of this has led to a murky and protracted struggle for control.

The complexity and fatalism of this conflict turned off the rest of the world long ago – if indeed the rest of the world was ever actually interested at all. Simply put, while Congo has been tangled in a quagmire for over fifteen years, few have cared about why it is happening. Jason Stearns works hard to try to change this reality, probing deeply into the causes of the conflict, and skillfully moving past its shocking brutality to get at its nucleus.

Greg Houle is a freelance writer living in New York. Find out more about him at www.greghoule.com and follow him on Twitter @greghoule