Julian Schnabel’s switch from painter to filmmaker was one of the more surprising reinventions in contemporary culture. For Declan Tan, however, his most recent effort is a serious anticlimax 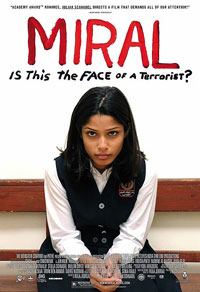 Julian Schnabel has more than impressed, actually he has excelled in his past features, all biopics of wildly varied personalities and very different nationalities. First there was his contemporary, and fellow New Yorker, Jean-Michel Basquiat, for whom he made 1996’s ebullient Basquiat. He followed up with an Oscar-nominated performance from Javier Bardem in the Cuban-set Reinaldo Arenas biography, Before Night Falls (2000), before picking up more Academy award nominations and the Best Director gong at Cannes with The Diving Bell and the Butterfly (2007).

Now Schnabel has transported his considerable skill to the Middle East. And unfortunately, it is with little or no impact. Too poorly informed to be a serious political film, too aware of its own possible significance in having any impact, and too clumsily written to be a comprehensive biography, Miral is simply a disappointment for what could have been a great cinematic statement. It’s like Schnabel finally wants to claim an Oscar for himself, by making a film that looks brave but only on the surface.

Miral doesn’t just try to tell the story of its titular heroine, but also Miral’s biological mother, Nadia (Yasmine Elmasri), a would-be terrorist in prison, Fatima (Ruba Bial), and Miral’s unofficially adopted mother, Hind Husseini (Hiam Abbass). The latter is the core of the film, we start and end with her, and she is the reference point to all of the passing characters throughout.

We begin with Hind’s funeral in 1994 then cut back to 1948 in a kind of a how-it-all-began deal. Hind is walking to work and amidst gunfire and settling dust in the aftermath of the Deir Yassin massacre, she comes across 55 stranded orphans in the streets. She takes them to her mother’s home and feeds them, clothes them and eventually begins educating them. Over the years, this 55 turns to 2,000 until she has a bona fide school for girls, holding strong to a policy of non-participation in political struggle (in any overt way) and a complete commitment to “her children”.

Yes. This is an admirable story.

But Schnabel and Rula Jebreal, writer of the novel and the film, get muddled trying to mix the heavy story and politics, always stalling at a shallow depth on both. Schnabel freely admits he is no expert, admits he is not even trying to be. So he wants to use up the situation for an artistic experience, OK. Perhaps you don’t agree with that. Maybe he’s using the situation to get his hands on some awards. It’s hard to jump to that conclusion, but it looks that way. The politics are watered down, Schnabel and Jebreal seem to have redacted anything too controversial, anything that doesn’t fit in with this kind of fashionable social awareness where only the most superficial details are left in, the crimes of the Israeli government left without analysis, without debate, and only mentioned in clumsily didactic exposition.

As the movie unfolds we’re also offered a backstory for Fatima, the nurse turned activist, who plants a bomb in an Israeli cinema during a showing of Polanski’s Repulsion. Schnabel seems prepared to confront and condemn the thought-process behind an attack on innocent life by Palestinians on Israelis, but the other way round we rarely see the violence, Israelis only demolish buildings, imprison and then release. The murder of civilians seems far away and not immediate, contrary to the actuality of the situation.

In the Palestine that Schnabel creates, the Israeli army is not quite the belligerent occupying force that history has shown them to be. There are snippets of this poking through, some actual footage is cut in with the gloss, but it is ambivalent and afraid to come out and say what it is and say it straight. At the rushed conclusion we are told that the Oslo Peace Accords of 1993 were a serious hope for an end to the atrocities. Perhaps this would have been an acceptable comment if the film was made in 1993. With the gift of hindsight Schnabel should or could have plugged the depths of this event for what it really was, another step in further dispossessing and systematically destroying the people of Palestine and as Israeli historian Ilan Pappe says: “to corral Palestinians in South African-style bantustans”. Instead the film laments that the accords have “not yet been honoured”.

Coinciding with the films political naivety, Schnabel seems also to have run out of ideas stylistically. The opening titles are atrocious, even amateurish. Then there’s the camerawork. It seems to try and show the possibility of hope, of freedom in its freeform style, often handheld and spinning looking up at blue sky or the trees, or whatever. But the whole experience is unconvincing, even insincere. These flourishes that made his previous films refreshing and even remarkable, are used to little or no effect here. Ultimately, the photography, mixed with a clumpy script and a removal of the US role in proceedings, amounts to what seems a poor understanding of the sheer desperation of the oppressed people in Palestine.