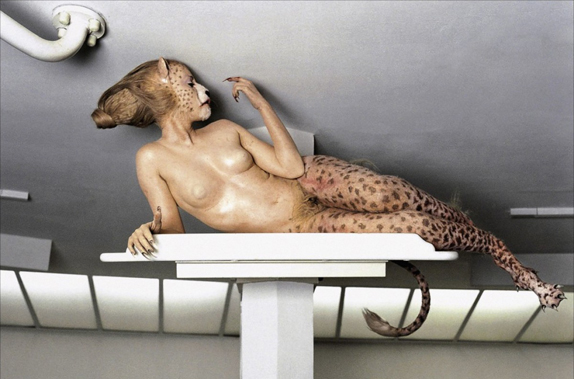 “…what others call form I experience as force” – Roland Barthes

LAYER 1: SUSPENSION
Begin with iridescence and force. A force without form or home or convention, almost more like “a diagram without a will” (1) – suspended and hung. Send it at a line, ask it to organize a sport, watch it seek out – discover – form. And then you might begin to discover the medium Matthew Barney works from. Another word for potential, force is, after all, measured in its effect. Mutability is the hidden elixir here. Ever, ongoing, endless, metamorphosing mutability. If force is the substance of transformation; mutability is the secret of its success. Think of a squeeze; flesh responsive to the pressure. Think of a pass; player beholden to the ball. Think of a hydraulic jack pumped to its maximum pressure, held against vaseline-encrusted skin: danger, potential, eros, lyric. Think of a straight-jacketed Houdini suspended miles above, hanging from a moving plane. Think of the fall into the Isle of Man after a series of rituals and extended gracings of the floor. Tap. Friction. Hole. It is the restraint and tension that alters. Shape is only the end result of contact and suspension.

LAYER 2: SECRET
Reductive – not to mention unfashionable – as such a comparison is, biology can be likened to art. Biology and art take as their medium the manipulation and development of form; both depend upon the revelation and production of secrets as their modus operandi. Fiddling about in the sticky fascia separating and connecting the familiar and unfamiliar, biology and art, share the affinity for tackling what is most uncanny in life. Think of the genesis of species crafted out of nature’s own highly stylized and bizarre laws to produce visionary beings no one could predict; species transformations which tax the mind. In this sense, “nature” is just another way to name the sheer madness of biological generation.

But where science is hell-bent on denuding and taxonomizing precisely what is most strange and inexplicable in nature, one saving grace of art, I hope, is its desire to thrash and journey into the corridors of as yet unperceived realms. So imagine when the artist becomes biologist, unlocking the secrets of DNA sequences of which s/he is the very progenitor. Matthew Barney’s meticulously crafted bio-aesthetic projects are accreted from just such an impulse.

Like the pearl. Try to shave off a slice and put it under a microscope. You’ll only find layers formed in earlier pieces; genetic mutations from piece to piece. Narrative is biology here – physical transformation. Watch as a wrestling mat becomes a piece of flesh; a field dressing shifts from bandage to vaseline-field plugging orifices, to ubiquitous Barney icon (2) or watch as athletic equipment is turned into a seeping, dripping creature – denuded of function – reborn as suggestive organism.

LAYER 3: SECRETION
A nacreous concretion formed within the shell of various bivalve mollusks around some foreign body (e.g. a grain of sand) composed of filmy layers of carbonate of lime interstratified with animal membrane; it is of a hard smooth texture, of globular, pear-shaped, oval, or irregular form, and of various colors, unsually white or bluish grey; often having a beautiful lustre, and hence highly prized as a gem; formerly also used in medicine. (3)

Sometime after my first viewing of Matthew Barney’s Cremaster 4, I dreamt I was born inside a pearl held in the fingertips of one of the Loughton Candidate’s whimsical, caring, yellow-taffeta’d Faeries. It was a dream of sensation not plot. There I was, squeezed into some dream condensation of Dr. Seuss’s Horton Hears a Who spliced with – I only realized while writing this article – a 1991 Artforum cover featuring Barney’s work. But the focus of the dream was the textured substance of the pearl’s skin separating me from the world. Although I was made from the friction of a piece of sand housing inside a perfect form – tiny, at the whim of a Faerie, in danger of being dropped, last seen drifting off a yellow exercise mat, perhaps, into the sea – it was the material of the pearl’s wall that I remembered. As well as the feeling that the “I” in the dream was in the process of gestating into something-elsehood formed by the bio-aesthetic laws of the guiding Faerie’s – not conventional biology’s – rules.

LAYER 4: A PEARL DROPS, RISES, SUSPENDS – THE SECRET OF THE CREMASTER
The mollusk’s defensive formation around a foreign body, a pearl – like a secret – is a secretion of vulnerable, interior form hardened, layer by layer, over time. Once upon a time the secret was a fragile but potent cultural entity. Think of its formative presence in the nineteenth century in everything from psychoanalysis, detective fiction, archeology to Houdini. To uncover a secret – Tutankhamen’s tomb, the hysteric’s repressed conflict, Dupin’s purloined letter – suggested that one had found a key to unlock labyrinthine histories, confusions, lost cultures, narrative mysteries. The secret was sought after, courted, cherished, precisely because it was an agent of magic and revelation. Today the secret is chipped and tarnished, lacking in intelligence and vitality, reduced from pearl of wisdom to tabloid-encrusted excretion.

… Until Matthew Barney showed up in 1991 presenting an installation of video-taped memories of his secret trek across a gallery space (Mile High Threshold: Flight with the Anal Sadistic Warrior) or his two-hour loop for The Jim Otto Suite (1992). A gallery space heaving with the residue of effort. A ghost space – a world of creatures and objects and forms hunting, haunting. These are pieces not just about physical, sexual, and material force but which, in their video-taped state, include the shuddering suspense of witnessing secret rituals. Removed from public performance (which would make them just acts of spectacle and bravado), shelled instead inside the video-view, they are strenuous, touching, luminous choreographies of private acts of danger, eros, thrill, epistemophilic exploration, and sheer lyrical strain.

To revive the charged thrill of the secret as sensuous, public display – what Barney’s work shares with his mentor Houdini – in these times in which we live, is no mean feat. I mean, would Houdini have caused such a stir today? Imagine:

In Chicago Houdini escaped from a huge sealed envelope without breaking the paper. He released himself from the interior of a giant football laced with metal links and fastened with padlocks in Philadelphia. In Boston he penetrated the chained carcass of an embalmed “sea-monster” and left no clue to his method. (4)

Maybe, but I sense he’d need something else: the metabolizing secret – secretion – suspension into which Matthew Barney’s world asks us to escape.

This essay originally appeared in Parkett 45 (1996). Many thanks to Thyrza Nichols Goodeve for permission to republish.