The second of Dr Nick Maroudas’ photo-essays on Jacob Epstein’s public sculptures around London. The first is here

“Let’s all / Go down the Strand”. Walking along the Strand is always a pleasure because of its variety and the nearness of the river. “Hear the little German band / Ach du liebe Augustin”. Entertainments abound on all sides: on the east the University and the Law Courts; on the west Parliament, Admiralty House and the War Office. The comic spirit of Gilbert and Sullivan pipes its airy way into the Strand from both ends and down to its very centre, the Savoy. Somehow even the huge iron ribs of Behemoth at Charing Cross Station merely adds to the charm of the Strand: like a big dog lying down in your living room, at home among the knicknacks. It was at 142 Strand that young Marian Evans, a “loveable great horsefaced bluestocking” powered the wheels of Progress through her Westminster Review, and prepared herself for metamorphosis: not into some loathsome Kafkaesque insect but into that grave, sound, sane George Eliot who wrote “the only Victorian novel which can still be read by a grown-up”. Intellect and lightness meet in the Strand. So, all things considered, it was not unreasonable for a professional body like the Medical Association to build their BMA House at 429 Strand. With this act they set the scene for a tragic Whitehall farce. In 1908 their architect, Charles Holden, chose a promising young man to carve a Medical Frieze for the new building. It was a noble act, because that relative unknown would grow into the greatest sculptor of the 20th century, a pillar in an architectural tradition that spans more than 2,600 years: the tradition of putting a human form and a human face on public buildings. This tradition goes back from modern Europe, through the great cathedrals of the Middle Ages to the great temples of Periclean Athens and beyond, to the great temples of Ancient Egypt.

At first sight, what remains of that Whitehall farce does not look like tragedy. In all my years of strolling or hurrying up and down the Strand, I never even noticed the Medical Frieze until, having become interested in photographing London’s Epstein sculptures, I set out one day to look for it. The figures were so high up and so defaced that I obtained only two shots of acceptable quality (figures 6 and 7; there are better shots on the web). Sour grapes whispered consolingly, “they were probably not very good anyway” and I thought no more about them.

It takes only two steps to erase a cultural memory. The first generation begins to forget; then the next generation forgets that there ever was anything worth remembering. I belonged to that second generation in London of the 60s, 70s and 80s. But decades later, while I was googling information for this essay, a few black-and-white photos of the original plaster casts flashed onto the screen – from an exhibition staged by the Henry Moore Institute (figures 8, 9 and 10). Fortunately for us, Henry Moore had remained ever mindful of Jacob Epstein (see forthcoming article on Epstein’s busts). 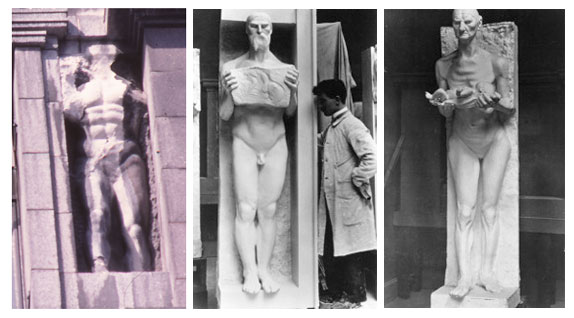 Henry Moore had seen the originals, and being himself a sculptor of genius (lucky Britain with Moore, Epstein and Hepworth!) knew that the Medical Frieze was a precious cultural artefact; he simply would not let modern Vandals sweep it into oblivion. Moore died in 1986 but his campaign persisted. The Courtauld Collection had preserved photos of the original plaster casts, and the Henry Moore Foundation mounted an exhibition of those photos. Moore made a vow never to exhibit at the Royal Academy, because the president of the RA, that hearty philistine Sir Alfred Munnings (“became the life and soul of any party as soon as he entered”) used to pop in to Rhodesia House to cheer on the demolition crew. For a good précis of Scandal in the Strand, see SU3A News and The Courtauld’s Art and Architecture.

The casus belli had already been neatly defined by Samuel Butler in verse; Butler once asked a Canadian museum if he could see their copy of Myron’s Discobolus, and was told:

“We keeps him in the cellar ‘cos he aint got no pants”.

So, this was the issue: ought not the BMA statues to be relegated to the cellar because they aint got no pants? The Press readily understood the threat to morality in 1908 (just as it understood in 21C that Milosevic was a genocide, that Sadam was about to destroy us en masse, that Gadaffy was a tyrant to be toppled…); and they went for him with a will. The Medical Association kept its nerve and held the line against a relentless campaign for years; but when BMA House becomes Rhodesia House in 1935, insanity rules – official.

The bureaucrats at Whitehall invoked Elfin Safety and his magic invisible eyewash (see TUC. Protruding front bits might fall on passers by; they must be hacked off lest man-in-the-street be bonked by a bouncing stone bust, or passing woman pierced by a flying stone penis. The hacking was vindictive and excessive. I can’t be bothered to look up the names of those old Rhodesia House officials, but the same type of Foreign & Colonial Jacks-in-Office, blessed by egregious narcissist Foreign Secretary David Owen, would later promote Robert Mugabe over Bishop Muzorewa as a suitable person to run Rhodesia; because Mugabe was obviously one of their own kind: glibly articulate and cold-bloodedly arrogant.

So far, with panic over dropped trousers and the resultant mayhem, it seems to be merely a routine Whitehall farce.

But with the rise of a new generation, 25 years after Moore’s death and 75 years after all that vandalism, the Royal Academy made some amends for the sins of Sir Alfred by hosting the HMI exhibition in January 2011; and their poster was what Google flashed onto my screen, months after the event. To my eye those few photos, in chalky white and greasy black, vindicate Epstein’s concept and execution alike (figures 8, 9 and 10). As far as I can judge, this artist has understood what a Medical Association ought to represent. The plaster casts express a collective atmosphere of science and calm objectivity, coupled with a warm humanity and, above all, a love of abounding health (“rude health” as it used to be called). Prudery has no place in medical science; neither has pornography.

Not since the ancient Greeks has a sculptor depicted the human body with such a zest for life. I wonder where Epstein found his models, because modern city dwellers do not enjoy the advantage of ancient Greek citizens: they are deprived of many physical tasks (including hand to hand combat) that are needed on a daily basis to develop all the muscles naturally. Compare this modern photographic nude by Ed Weston (figure 11): it is an elegantly simple composition because Weston was a genius of the genre; but the flesh is flabby, as are most nudes since the time of Classical Greece. Even nudes by Michelangelo, for all their bulging biceps, show a certain unctuous “morbidezza” in the curve. So on what broad back did Epstein see such hard, crisp muscle; did he dream it up?

Epstein’s general concept can be inferred from figure 10. The figures are nude because it is an “academic” work suited to the grave purpose of an Academy of Medicine. But the motive of this nudity is not what George Brassens had in mind when he sang to the callipyginous lady: “Madame! Je voudrai voir votre academe, et mourir”. 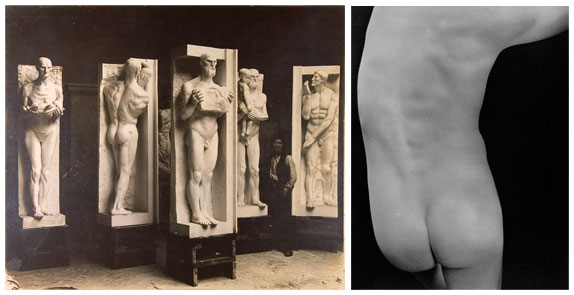 On the contrary, the word that springs to mind for this style of execution is “chaste”. I like the grandfather carrying his grandchild at his shoulder; I know how it feels. There are quotations because the statues are the work of a young man: the aged lady on the left has a touch of Rodin’s Belle Heaulmiere; and the man who stands square but looks sideways and upward, with arm curved over his pelvis, echoes Adam standing at the right hand of Christ in Michelangelo’s Last Judgment. But the echoes are faint, and the mood is new.

Look at that great-grandmother (or aged midwife) holding a newborn child (figure 9). I call it l’Heritance because it catches the fulfilment of the old, when they see young life springing out of their own old life; a newborn springing across the gulf of time, while they themselves are sinking back into the gulf of time.

Consider that reverend professor who gives the Anatomy Lesson (figure 8). Although advanced in years he is in the prime of health. He is holding what looks to me like the cross-section of a pregnant womb; to right and left of him are figures holding fruits of the womb: infants whose health and wellbeing he has sworn by the Hippocratic oath to promote. Compared to Epstein’s concept, The Anatomy Lesson of Dr Tulp is mere grand-guignol: Rembrandt is simply telling us, “I wants ter make yer flesh creep”.

Leonardo also drew a pregnant womb in cross-section, but it was only an embryological sketch in a notebook, tersely annotated “much here is mysterious”. By comparison, Epstein’s anatomy lesson can be seen as a thoroughly worked-out pictorial tract about life-giving activity in a sane human environment.

This is where farce begins to approach tragedy: Henry Moore having opened our eyes to the magnitude of the loss, mental pangs begin to stir. Though it might not seem appropriate to apply the word “tragedy” where there has been no loss of life, nevertheless the loss of a cultural artefact as great as the Medical Frieze is the loss of a life-enhancing part of wonderful, grotty London town.

Given these photographs, it would not be difficult to reconstruct Epstein’s frieze. It would give worthwhile employment to some British sculptor with a talent for pastiche. Nor would it cost much. Mr Cameron might allocate some petty cash from the British government to repair its former damage to Rhodesia House. Or Mr Mugabe might divert a tiny trickle from Zimbabwe’s tobacco-and-diamond revenue toward Africa’s great heritage of Bantu sculpture, employing African sculptors to restore (or even add to) the wonders of Zimbabwe House.

Read the third of Dr Maroudas’ essays, on Epstein’s sculptures in Cavendish Square