Bunhill Fields Burial Ground near Old Street in the City of London has been given Grade I protected status. Originally the Dissenters’ burial ground, one great names of English literature have tombs here, including William Blake, Daniel Defoe and John Bunyan. The Department of Culture, Media and Sport has also listed 75 of its tombs. David Garrard of English Heritage referred to the site as “the terra sancta of English Nonconformity”.

Meet you at the cemetry gates
We all need somewhere to go on our dreaded sunny days. For those inclined to be both literary and world weary, an afternoon amongst the marble and ivory of the deceased can be oddly inspirational. Whilst graveyards like Prague’s New Jewish Cemetery are worth a visit to pay tribute to the likes of Kafka, this is Spike’s guide for to getting your money’s worth. Pack your Kindle and some sandwiches.

01 Highgate East: Highgate was part of a grand project in the early 19th century, to build seven great cemeteries around London. The eastern part of the site is open to all and includes Douglas Adams, George Eliot, Karl Marx, Paul Foot, Jeremy Beadle, and Malcolm McLaren. Highgate West: Highgate West is the most atmospheric, it is almost a city of the dead and can only generally be accessed as part of a guided tour. Some sections of the ground are unstable and people used to steal souvenirs. There are some wonderful architectural features such as the Circle of Lebanon and the great stone entrance to Egyptian Avenue. Amongst the residents are Beryl Bainbridge, Jacob Bronowski, Alexander Litvinenko, Christina Rossetti, Radclyffe Hall, and Adam Worth (the model for Moriarty). 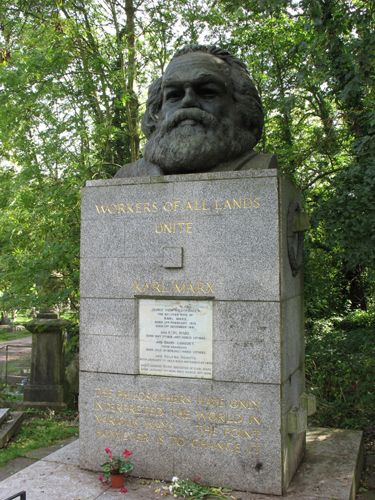 [Source of image and license]

03 Cimetière du Père-Lachaise: Although it houses some remarkable tombs and a legion of unruly cats, there is something of the parking lot about Père-Lachaise. The cemetery is the biggest in the city of Paris. However, the list of dead celebrities here is utterly remarkable and this is a must for any death tourist. Oscar Wilde, Honoré de Balzac, Colette, Molière, Marcel Proust, Alice B. Toklas and Gertrude Stein are amongst the highlights.

04 Kensal Green Cemetery: Harold Pinter is the only recent name of note in this west London site, another of the ‘Magnificent Seven’ Victorian locations. The playwright of the pause joins grandfather of computing Charles Babbage, as well as novelists William Makepeace Thackeray, Anthony Trollope, and Wilkie Collins. Chesterton immortalised this resting place of the immortal in his poem ‘The Rolling English Road’.

05 Other literary death destinations are Glasnevin in Dublin (Brendan Behan and Christy Brown), Haworth Parish (the Brontës), and Westminster Abbey (Chaucer and the plaques in Poets’ Corner). English literature even has a representative movement in the ‘Graveyard Poets’ of the 18th century. Pre-Romantics such as Thomas Parnell, Thomas Gray, William Cowper and Thomas Chatterton used the cemetery as backdrop to their morbid ruminations on King Death and the brevity of human existence. The ‘Graveyard’ sensibility carried over into the Gothic strain of Romanticism and its quest for the darker sublime.

PDF map of Bunhill Fields and location of graves