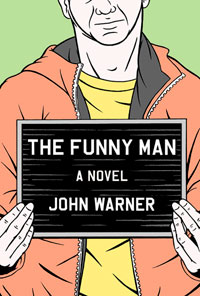 John Warner’s debut novel, about the rise and fall of an unnamed American comedian known only as “the funny man”, is a mulchy broth of satire, cultural commentary and La-Z-Boy philosophy that simmers away on lukewarm, only ever threatening to come to the boil, though not without ambition, before bubbling back into quiet soup, despite a satisfying crouton rising to the surface now and again.

By switching between courtroom scenes, where the funny man is on trial for murder, and flashbacks, where we learn of said funny man’s trawl through the dehumanising backstages of ‘the comedy world’, Warner, in his quintessential American voice, attempts to blend one too many disparate elements in fashioning an over-elaborate whole, without quite succeeding.

There are, however, moments of literary revving, a story that builds as shearing layers, but ultimately there is too much slippage, and the story’s foundations turn out to be a little uneven and cracked, perhaps even hurriedly laid.

It sounds simple enough: The funny man is happily married; he and his wife share a wry humour that feels warm and true. They also have a young son, of whom they are most proud. And in his work, the funny man is reasonably successful on the stand-up club circuit. But he wants more and more, to be a world-beater, worshipped as one of the greats (Bruce, Carlin and Pryor, in the funny man’s opinion).

After a gig he meets a talent agent who tells him he needs a “gimmick”, a thing recognisably his, to take him to the next level. His son unwittingly provides this gimmick – a most moronic one – yet the funny man becomes a runaway success, earning millions with his act. He is roped into making studio movies, then a sequel, all while having to do “the thing” that of course he comes to hate. Meanwhile, he becomes unassailably detached from reality. When his celebrity reaches unmanageable levels he begins to rely heavily on medication, which in turn leads to the breakdown of his marriage, an incident with his son that is hugely played up (but sags when revealed), and eventually, a secretive long-distance relationship with a female tennis star.

Warner provides some readable if often familiar asides throughout these aspects of the plot; on what happens away from camera; the anatomy of a cynically made Hollywood comedy; and the demands made on a touring comedian. His commentary sends up both the executives that fund the big-budget idiocy, and those people who pay to watch it. Though his message is often delivered with an over-inflated belief in the veracity and humour of his words, it does flow quite smoothly on the whole.

But too often it seems routes that could have been taken, to explore more dangerous or original ideas, were instead avoided. The novel reverts to platitudes (1. Be careful what you wish for, 2. Fame ain’t all that), along with the employ of some dry narrative devices (1. The unreliable narrator, 2. Observational stand-up bits disguised as conversation) which occasionally grind to a halt the reader’s enjoyment.

The social media aspect of the trial for example, is played for a couple of laughs. A theory from his lawyer, Barry, about “not guilty by reason of celebrity” is toyed with. Then there is the other musing, also from Barry, on there being no such thing as ‘emergencies’, only ‘eventualities’, and how the funny man believes this theory to “reconcile both free will and predestination” (an idea perhaps inspired by the later works of St. Augustine). Is it the occasionally patronising tone of some of its delivery that makes it unconvincing? Perhaps, because there is something that dims the message. Making it all sound a little beige. Like a book review based on ill-conceived soup and construction similes. Which brings us back to those courtroom scenes, unfortunately reading like those parts of a novel where one plot strain is indeed a strain to get through. Whole passages you want to skip over to get to the riper elements of the plot.

The second half further mixes in the possibility of the funny man’s delusions, taking the form of a classic reality/fantasy conundrum, as he is mysteriously blinked away to a celebrity retreat (or “advance”, as it is explained); a place recalling Patrick McGoohan’s surreal 1960s TV series The Prisoner, crossed with the titular utopia from Huxley’s parting gift, Island. There the funny man meets the love of his “second life,” Bunny, the tennis star, with Warner attempting to leave some mystery as to the fate of his protagonist.

Yet what Warner really is good at, turns out to be played down. The relationships and interactions between the husband and wife, and their child, are touching, full of feeling and honesty, transcribed as if straight from real-life. But the novel’s efforts to instead excoriate the minor components of a rotten corporate system, rather than explore the possible source of American society’s slide toward post-cultural obsessing, is a choice that eclipses the inherent humanity of this everyman journey.

Warner’s point seems to be that this fame thing happens to once-grounded individuals, but the impact of that message fizzles when the wayward nature of its plot must be elucidated. While doing little to explore the true cause of that delusional state of mind.

This is only Warner’s first novel-length fiction, and a misfiring run-out first time round is by no means disaster (look at HST’s The Rum Diary). There is space to develop, and potential to fulfil, demonstrated fully in this story’s ability to have you hooked, at times, be it not even necessarily the ‘style’ that does it.

And if there is a kind of moral here, in this more nibbling than biting satire, then at least efforts have been made to avoid it becoming a preachy one, which is admirable. (But now I’m the one being condescending.) Nevertheless I’ll still be trying out Warner’s follow-up. There are just enough tasty croutons here to warrant that.