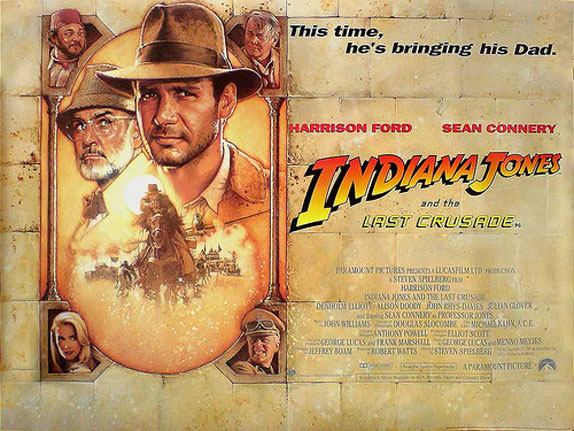 Whilst the Star Wars trilogy has embedded itself deep within our cultural mythology, Robert O’Connor wonders about George Lucas’ other classic serial, the Indiana Jones films

George Lucas made the first Star Wars movies as a throwback to the classic adventure serials like Flash Gordon. A few years later he did it again with the Indiana Jones movies. They’re all pure entertainment, the Star Wars movies have become a part of the cultural consciousness. The mythology in them has been given serious treatment by scholars, journalists and the like. What of the Indiana Jones movies?

For this discussion, I’ll be looking at the first and third Indiana Jones movies, Raiders of the Lost Ark and The Last Crusade. These two have the most in common with each other in terms of plot and subject matter. After all, the artifacts at the center of the movies are central to Judaism and Christianity, respectively, which are in themselves closely related.

Both films, for example, begin with Indy in the middle of one of his adventures trying to acquire a new item for the museum. In Raiders, it’s a South American idol. In the second, a Conquistador cross.

The opening adventure in Raiders serves the purpose of introducing the villain, Rene Belloq. His relationship to Indy is summed up in his first line: “There is nothing you can find that I cannot take away”. He then warns Jones about choosing friends wisely, and holds up the idol for his native soldiers to grovel at.

Belloq is not obsessed with the relics he takes. Nor is he interested in selling them to a museum like Indy would have done. Belloq has a desire for power over others, which he gains when holding the idol above his head. When he calls the Ark “a transmitter, a radio for speaking to God”, that is the reason he wants his hands on it. And he’ll befriend the Nazis to get it.

In the end, Indy finds the Ark, and Belloq takes it away – only to be destroyed by the Ark.

As for Crusade, the opening adventure establishes a theme that runs through both movies: obsession. Indy finds the crusader cross and spends his entire life trying to get it back from the bad guy.

In both movies, an older man is obsessed with finding the treasured objects. In the first film, Indy’s teacher Abner Ravenwood had an obsession with the Ark, while in Crusade, it’s Indy’s father Henry that was obsessed with the Holy Grail. Indy’s relationship to both men had fallen out and he thinks of the objects of their obsessions with suspicions. Through the course of both movies he begins to believe both of them and reconcile his relationship with both, albeit in Raiders, Abner is dead by the time the movie starts, so Indy reconciles with his daughter Marion, who is implied to be the reason for Abner and Indy falling out.

Because of his obsession, Henry Jones knew the dangers that were to be faced on the way to the Holy Grail – the journey, the three tests. He had written all of it down in his diary which Indy used to get through the tests.

Another recurring motif in the movies is knowledge. In Crusade, Indy says in his opening lecture that “80% of archaeology is done in the library”, and that it doesn’t involve hair-raising adventure. Both Walter Donovan and Belloq know an awful lot about the objects they desire, but key misunderstandings cause them to fail.

In Crusades, Walter Donovan knows a lot about the Holy Grail. He says he’s passionate about antiquities, though his regular job is never revealed. But when he enters the Grail room, he is given a beautiful golden chalice – one that looks like most depictions of the Grail. He calls it “the cup of the King of Kings”. But when he drinks from it, he ages rapidly and dies. Similarly, Belloq knows a lot about the Ark, but doesn’t heed the warnings spoken most clearly by Brody at the beginning about the wrath of God.

Even Dr. Schneider, who hands Donovan the golden chalice knowing its the false Grail, who knows the real thing wouldn’t be made out of gold – “the cup of a carpenter” – didn’t really understand it. Henry says at the end that “she thought she had found a prize” in the grail. That’s why she reached for it and fell into the crevice. But a prize for whom? Her loyalty is to the Nazis for much of the movie, but when confronted by Indy in Berlin, she insists she doesn’t believe in any of it. The best answer is herself and Indy, since when she crosses the Grail seal with it, she calls to Indy that “[they] have it!” But what use would she, or anyone for that matter, have of it?

The Indiana Jones movies are entertainments first. Any analysis of them should keep this in mind. They are not brooding, introspective films that consciously try and explore deep themes. Any attempt to glean philosophical meanings from them is bound to yield shallow answers, if any answers at all. Questions necessary for these kinds of analysis don’t have obvious answers, since the primary aim of the films was not to deal with them, but to give the viewer a rocking good time. Which is exactly what I take from them.