The James Franco-Allen Ginsberg biopic is now available as a DVD. Save your money, reckons Declan Tan 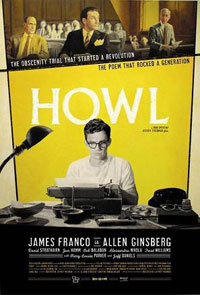 As well as telling the story of the 1957 obscenity trial concerning City Lights Books’ publication of the seminal poem, Howl, Friedman and Epstein’s film attempts to navigate the murky juices of Allen Ginsberg’s life and work during the 1950s, with a little slick black & white reconstruction of some of 20th-century literature’s most seditious moments to boot. And it fails to do any of it convincingly.

Friedman/Epstein’s product, and that’s what it is, is plain inauthentic in its execution. From the banal opening credits to the pedestrian animations, it becomes an irritation to not only the eyes but also the ears, as it somehow manages to make the poem itself seem tedious and irrelevant.

Maybe it’s something to do with Franco’s phoney voice, where he forces the idiosyncratic inflections of Ginsberg to comic effect. Maybe it’s simply that the whole production is too polished and artificial to make it real or interesting (which in reality it most certainly is) but none of the trickery can hide the fact that Franco’s performance is mediocre. There are brief moments when he channels Ginsberg though the majority of his onscreen time is spent too visibly ‘acting’, throwing in mannerisms and idiosyncrasies that seem rigidly calculated and false. Ginsberg had a unique voice, not just in his writing but also in his delivery, and it’s turned into a party-trick impersonation here.

There’s more. Between the trial and the biopic interview sessions, we also have these interpretive animation sequences that either directly translate the poem’s words or make up their own flabby art-school meaning and force it on the audience. What was the point in that? Seriously. Poetry is for the reader/listener to interpret, to be digested and understood, not something to be fed on a colourful plastic spoon by slothful cartoonists who imagine angels and penises jetting around with the appearance of a flaming fucking saxophone every five seconds. I genuinely pity anyone trying to read this poem for the first time after having seen this film.

The best movies of this kind make the subject matter somehow relevant to the current day. Something seemingly easy with a man and a generation such as Ginsberg and the Beats. To watch this you’d think they all died out without so much as a whimper. But it’s particularly the animated scenes, thrown in to make something that’s essentially a filmed play become more cinematic, that turn this into unpalatable compote.

At one point Franco’s Ginsberg says: “There is no Beat Generation” and judging by the absence of most of the would-be expected cast, the filmmakers seem to agree. Only Kerouac, Cassady and Solomon get a nod, though next-to-zero lines. Just a whole load of posing. And sitting in the Six Gallery during the first public reading of Howl, whooping, laughing and nodding like the trilby-headed hipsters of today might do. And strangely there is almost no recognition of the Beat’s continuing influence as it endeavours to make out Kerouac as a one-hit wonder with his speed-whipped On the Road. Disappointingly there is no appearance of William S. Burroughs (with whom he had a complicated but lasting relationship), no scenes of the numerous other literary icons that made up the Beat generation, with the influence of Kerouac and the other Beats largely ignored.

Friedman and Epstein have turned an exciting and revolutionary cultural moment into a soulless affair that leaves one to question the reason for the film’s existence. And it’s definitely not a good precursor to Walter Salles’ upcoming On the Road. But here’s to hoping.