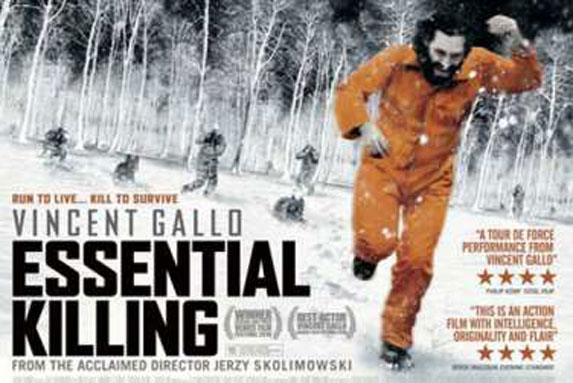 Vincent Gallo won acclaim for his silent portrayal and director Skolimowski has the pedigree. Declan Tan assesses whether Essential Killing lives up to its reputation

Jerzy Skolimowski (writer of Knife in the Water, writer-director of Deep End, actor in Before Night Falls) is clearly not a bad sort. His credits speak for themselves. And on top of writing one of Polanski’s greatest hits, he’s won a Golden Bear, Special Jury prizes galore and was even in Eastern Promises, which wasn’t such a farce either.

With Essential Killing he’s back in the fold-out director’s chair he seemingly carries around, popping it open when his mood so fits, and here he’s got the volatile talent of ‘Best Actor’ in Venice, Vincent Gallo (Buffalo 66, Brown Bunny), heading it all up quite confidently.

And he leads it all alone, as it happens, hopping it bare foot a lot of the way, as a kind of spiritual Rambo on the run from all sorts. But there’s none of the Stallone-gushing at the end of Skolimowski’s minimalist survival story, as Gallo, (playing Mohammed, though he is never called this by name but only in the end credits) is silent throughout. Dialogue is mostly incidental and is never used to propel the story. We just have Mohammed and his quiet struggle.

Captured by the American army, he is taken from the geographically unspecified deserts of the Middle East, transported, not-so serendipitously, to harsh and unnamed European snows where he makes his fluky escape. The van he and other prisoners are travelling in crashes off the side of a hill, an episode inspired by a personal experience of the writer-director’s, when he skidded and almost tumbled in similar circumstances. When it happens in the film it seems a little implausible, the first of many unbelievable strokes of luck that Mohammed witnesses, but Skolimowski’s anecdote is a good enough antidote post-viewing.

Then he’s on his own, our Mohammed, in his orange overalls and barefoot, handcuffed, injured, still near-deaf. Sounds like a lot’s going on? Well, there is and there isn’t.

Essential Killing feels like a re-working of genre, like The American, kind of familiar but also original. And like Corbijn’s film it is thick with symbolism, though not as intentionally teleological in its conclusion, as Mohammed is a character who lives from moment-to-moment, killing by instinct and occasionally showing mercy, depending on the prey and its necessity toward his survival.

There are weaknesses, though. The moment of the first ‘flashback’ being one of them, so tamely plugged into the narrative that it almost turns your feeling for the film on its head. Imagine overblown-whites and shaky-cam, underscored by some cliché middle eastern music that would fit Russell Crowe running through a field slaughtering Romans. Neither imaginative nor revealing. Aerial shots go on too long (yeah, but they’re nice lookin’) and become tedious, thankfully they do allow you to ponder what you’re going to eat for lunch tomorrow. Then there are the dreams that foresee the future, and so on. But in the end, somehow it comes together in spite of its flaws and, despite its subject matter, it’s (disturbingly) entertaining, exciting and involving. There are even funny bits.