Vanessa Liberad Garcia reports on Company of Angels, the Los Angeles theatre group committed to connecting with the community 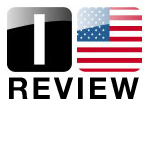 When one of my best friends, Baby Dewds (aka talented theatre actress Dani O’Terry), invited me to watch a play in Downtown Los Angeles called Civil Rites, I was excited. She and I are both staunch liberals who love to debate politics for extraneous hours in a series of relentless discourses we call “Saving The World One Conversation At A Time”. These last from 9pm until we exhaustedly pass out mid-sentence at 4am. I didn’t ask many details about the play since her sensibilities always steer me towards stimulating entertainment that provides a priceless opportunity for both growth and fun… or a hilarious and complete waste of time. We scarfed down the last of our re-heated Thai food, paused R. Kelly’s YouTube musical Trapped in the Closet, and were off!

Upon hearing the name Civil Rites, I immediately assumed we were going to see a left-leaning play with loud unapologetic opinions about our troublesome political climate, written and performed by struggling actors from LA’s abundantly talented underground theatre scene. Contrary to popular belief, there’s – thankfully – much caliber theatre in LA. However, Civil Rites proved to be a series of piercing monologues unlike anything I’d experienced before. Theatre made by the people for the people. It featured personal stories by non-actors and burgeoning artists – disenfranchised residents of Downtown Los Angeles, which is gentrifying at exponential rates. The non-profit theatre group Company of Angels that nurtured this ensemble show summarises the play’s backdrop best in their program statement: 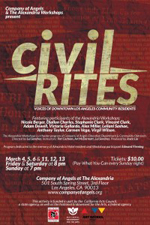 “After decades of public and private disinvestment in Boyle Heights and Downtown Los Angles, the populations in these historically low-income neighborhoods lack sufficient access to arts programs that both heal and build leadership skills in these residents. Recent redevelopment efforts in these neighborhoods have completely ignored the current residents and only exacerbated the issues that plague these low-income communities. Increased rents have reduced the amount of affordable housing and police enforcement efforts further criminalize both homeless residents and street vendors. The only way these issues will be addressed is if community residents learn to make themselves heard on these and other issues affecting their lives. Through META, CoA is currently working with the above-mentioned communities to use theater skills to depict their concerns and develop the skills necessary to advocate for the resources they need to thrive in their communities.”

Each performer shined in their unique ability to convey nuanced truths with captivating and colorful rawness. Carmen Vega, Victoria Gallardo, Vincent B. Clark, and Virgil Wilson especially moved me. They explored topics like unregulated toxins in tap water, drug addiction within the senior community, fear-based complacency, and the “invisible” homeless. Their impacting pieces personalized the politicized by painting an intricate human face on societal problems. Civil Rites evoked an effortless empathy within me that has permanently bridged their life stories to mine. Please read more about Company of Angels and donate to their Civil Rites program by visiting their website: www.companyofangels.org