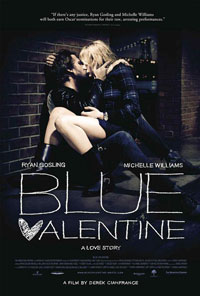 If you’ve happened upon any of the interviews with director and co-writer Derek Cianfrance talking about his 12-year project, Blue Valentine, you’ll notice there’s a through-line to all of them. As wearied as his two main characters become of each other, Cianfrance, in his routine exchanges with the press, generally refers to his film as a “duet”. Probably because that’s the perfect way to describe it.

Ryan Gosling and Michelle Williams, who both have the knack of turning up in films that lend themselves to repeated viewings such as this one, play the young couple of Dean and Cindy. Two people, seemingly given the plainest names possible (perhaps a starting point for their universally recognisable situation) who are beginning to see their relationship crumble. We learn of their circumstances which, we find out, are not exactly universal; the shotgun wedding, their daughter, their family problems, previous relationships, ambitions or non-ambitions, coaxingly revealed in flashbacks (actually shot six years ago) that don’t announce themselves or make it immediately obvious that ‘we’re in the past, now’.

Instead, and this is where the ‘duet’ bit comes in, Cianfrance opts for 16mm film to contrast the digital video of the ‘present day’, a delicately scored soundtrack (by the otherwise-disappointing Grizzly Bear) heard only in the ‘past’ sections of the film and of course, a slightly more trendily attired Cindy and Dean. All these techniques and the mise-en-scène subtly carve its narrative, as if sculpting time, without imposing answers on its audience, showing us something as close to real as you can get without setting up a CCTV system in an unsuspecting newlyweds’ home. Which no one seems willing to do these days.

In the opening shots the two are rarely found, in-focus, taking up the same frame, a deft touch to establish the frailty of the relationship’s current grounding, another example of “form illuminating content”, as Cianfrance puts it. Mix in the slow reveals of an intelligent and playful, if eventually unambitious, Dean, working as a furniture remover in New York, meeting Cindy the medical student, then tension between the pair’s wildly different purposes in life becomes palpable as it escalates.

It is one thing a director naming an influence in the hope that it adds more gravitas to his work, without said influence actually being remotely noticeable, but Cianfrance’s work here genuinely calls to mind the work of John Cassavetes, specifically A Woman Under the Influence which Cianfrance has said, in one of many chit-chats, is one of his favourite films. This being only his second feature makes it all the more impressive.

In other words: if you like films, see this one.