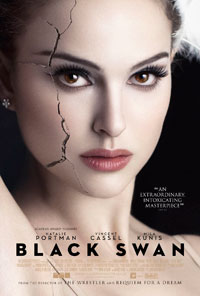 Recommending this film is not the easiest thing to do. You have those who already know and appreciate the prospect of a new Darren Aronofsky film, granted some of those fans fell off at The Fountain, his most personal and ambitious work, before being pulled back in by The Wrestler.

Then you have those yet to be convinced.

And the thing with his latest is, it will at once alienate part of the audience while at the same time dazzle the rest. But of course this isnâ€™t necessarily a bad thing, and itâ€™s surely not Aronofskyâ€™s intention to simply make a film that everyone is going to love, to become the American Nolan; making dark, often subversive films that make big box office. (At least not this time round, as his next project is the follow-up to Hugh Jackman-produced X-Men Origins: Wolverine.)

But back to the film, which focuses on Nina (Portman) an obsessively committed ballerina in a New York City ballet company. She even dreams about her moment in the spotlight in the appropriately ominous introduction, the lead-in for a film that exists almost entirely in Ninaâ€™s mind. Through the first shots of her warming up, stretching in the early morning, weâ€™re also entirely convinced of Portmanâ€™s commitment to the role. And the paranoia kicks in almost immediately as we watch her gradually disintegrate before our eyes. From the early scenes of her on the train, wearing her white scarf and looking into her faint reflection, we quickly get the sense of her vulnerability. As she rides the subway, she spots what she thinks is herself standing in an adjacent carriage. She is already beginning to fall apart, becoming a ghost under the pressure of her own mind.

She sees her own face looking back at her. Then in a flash it becomes her lookalike/double and newcomer to the company, Lilly (Kunis), all dressed in black. The mind fuck continues both literally and figuratively. She imagines (or does she?) an encounter with the sexually liberated Lilly, the Black Swan to her White. The atmosphere of unreality pervades, with Aronofsky often framing his actors trapped in the reflections of mirrors, mirrors which become significant by the end. At one point even a room of portraits, painted by Ninaâ€™s slightly twisted mother, begin screaming mad gibberish at her. Itâ€™s a relentless spiral downward as Nina and Lilly vie for the lead role in the troupeâ€™s refreshed version of Swan Lake, led by magisterial director Thomas (Cassel), for whom they also compete.

But Nina has a problem, her dancing, like her mind before the fall, is too controlled. To lead the new season, she must be able to portray both the angelic White Swan and the cursed Black Swan. Lilly offers to help. But Nina struggles, her rigid mind so inextricably linked to her disciplined body, unable to let go and too concerned with perfection. Thomas tells her: â€œLose your selfâ€. She does her best.

If you know the story of Swan Lake, then you know where this is going. After a little while you realise the film is itself an updated version of the classic ballet by Tchaikovsky. So itâ€™s got that postmodern thing going on. Which is nice. But even if you donâ€™t know your 19th-century Russian ballet, you can probably work it out. But crucially, itâ€™s not a twist that Aronofsky is going for. He relishes the slow build to the inevitably bleak ending, another glorious slice of his â€œthereâ€™s no escapeâ€ doctrine. So itâ€™s the journey thatâ€™s to be enjoyed. And enjoy it we do.

Thickly layered with the destructive themes of obsession, passion and ego, a film that will inevitably be labelled as â€˜existentialâ€™ (though Aronofsky denounces the â€œexistential humanistâ€ label that seems to have landed on him), we have here a masterful piece of immersive cinema. The sound and the visuals conspire in morbid harmony, creating a grim, confusing and often horrifying study of Ninaâ€™s crumbling psyche. And itâ€™s the fine work in post-production that draws all these elements together: well-conceived visual effects and a deep soundscape that confidently play with the audienceâ€™s nerves, served up with a booming score from long-time Aronofsky-collaborator Clint Mansell, along with oneiric imagery that becomes increasingly nightmarish as weâ€™re drawn into the pressure-cooker world of ballet. Even the details down to costume design have been finely tuned, plenty of contrasting black-and-whites, continually getting at us with ideas of good and evil, darkness and light, simultaneously real and imagined.

And itâ€™s done seemingly with ease. The human mind is familiar territory for Aronofsky, his films are generally set within it, his oeuvre predominantly exploring disintegration of the self through passion or obsession or addiction. His characters find freedom through death, either of the self or of the body, or both, seemingly saying that one cannot survive without the other. And Black Swan might be his magnum opus. Its last, lingering line is: â€œIt was perfectâ€. He just might convince you.