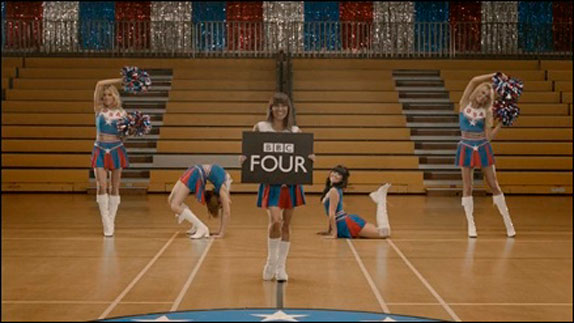 Thankfully BBC Four hasn’t been demolished just yet. If it had been, we wouldn’t have had chance to enjoy its recent ‘All American’ season. They say that BBC 2 would absorb the channel’s role, but doubtless this would come with – if not dumbing-down – half as many documentaries as they currently produce. And, indeed, they’ve produced a near-dazzling array of films for this latest season focusing on US culture – but this is no paean to American hegemony, and the more I tried to absorb the schedule, the more I wondered if perhaps Tom Wolfe hadn’t been given some role at the Beeb. The subjects covered over the last couple of weeks have been like a cross-section of that writer’s brain; there’s been high culture, low culture, kitsch culture, surf culture, diners, journalism, nomads, hookers and civil rights. Any fan of Wolfe will no doubt be able to pluck a volume up and thumb through almost all of those subjects in one of his collections, but then I began to wonder, how would Tom Wolfe write a TV review? Well, for starters he probably wouldn’t title it anything nearly as banal as the above, but he might call it something along the lines of…

The Electric Blu-Ray Acid Mind-Bath: America is Over There!

‘Why’s all this paint here?’ You can see Andrew’s mind ticking over and his puppy-dog eyes begin to twinkle with his excitement – Yes! Pollock painted here! And they’ve preserved it, an encrusted monument to that great man’s drips. Great man? You can make up your own mind. Andrew Graham-Dixon has made his up in the Art of America and, as the BBC’s finest regular documentary maker – now that Attenborough stays out of frame, we can cut him a little slack. He deftly traces – with his infectious enthusiasm and never-patronising dulcets – the history of American art from pilgrims to present. All American art is here: Rockwell, Hopper, Warhol, The Simpsons?… and all of it, it seems, is about the loneliness of being one among many in a great big country full of people. After all, can’t Manhattan at rush hour be the loneliest place in the world?

Hopper’s popping up all over the place, and his most famous work – ‘Nighthawks’ – gives us a lead into the next show and the lonely fat-clogged heart of America in Stephen Smith’s America on a Plate: The Story of the Diner. This is where we sit down at that democratic counter and look across into America’s short-order soul… French fries pancakes sausages coffee doughnuts shakes steaks turkey clubs plastic seats – top you off? – cheeseburgers blueberries coffee onion rings eggs over easy – warm you up? – French toast roast beef meatloaf coffee gum chewing waitresses truck stop bacon coffee. What more can you say? What more can anyone ask for!?

Now this cat’s crazy, he’s touched the hem of death after all – or, at least, skirted around the edges – and who wouldn’t be a little spooky kooky cuckoo? James Ellroy’s Feast of Death (BBC 2) – with some strong language! – delves into the murder-centric mind of the author and we meet the embodiment of obsession. Kim Bassinger? She’s alright. But forget the movies – what the fuck good are we to him? Who are we to ask anything of this guy? This modern Beethoven! (Just ask him… why listen to anyone else?) Did the bitch overcook the steak again, James? Nah – It’s sexual power. That’s murder. Right there. If you don’t believe him, then why else do we care about serial killers? Men think about sex more than women, so they kill more. Ellroy is clearly obsessed by his mother’s murder; perhaps he sees himself as a failure – a not-quite-Beethoven – because he couldn’t protect her, but, if that’s not it, then he still has every right to be obsessed because, he says it, closure is bullshit. What’s a dyke bounty?

Now we’re with shutterbug Rankin in America in Pictures: The Story of Life Magazine. He’s indulging himself in a bit of hero worship – mutual snapshotting of these wily old coots that chronicled America. And, sure, maybe these guys aren’t exactly the man – but they were working for a Luce publication! Think Fortune, think Time. Think middlebrow America. But that’s, perhaps, not entirely fair, Life was, as Rankin’s film describes, a great unifier of the people – all of America could ooooooohhh and aaaaaaahhh at the pretty violent shocking beautiful celebrities/dead soldiers/famine victims but – look over here, America! – you could be looking at those photos next to this fridge, in this new kitchen or on this new lawnmower (in your fourth floor apartment) and, boy, now here’s Rita Hayworth. Call me an elitist or a cynical bum, but Life always seemed pretty cheap.

So, that’s all American, and, if that’s not enough for you, some of the most delightful chocolate chips to be found in this rich cookie came in Old Jews Telling Jokes. It’s pointless to tell the one about the rabbi or the gentile here, but these rascals have their own website and you have a few minutes to spare.