It has not been easy assimilating Beckett into our culture. While his mentor James Joyce made with ease the familiar journey from public outrage and bewilderment to universal love and admiration, Beckett, seven years after his death, remains as distant as ever. He wouldn’t have had it any other way. His fame is due to a play which he said was ‘misunderstood’. For a great Modern writer to become well known it seems he or she requires a degree of similarity to popular fiction to tempt people into reading them. Kafka has horror, Proust nostalgia, Lawrence pornography, Woolf niceness. Beckett seems to lack this. Only onmouseover=”window.status=’Spike investigates the significance of names in fiction and film’; return true”>Waiting for Godot approaches such familiarity: Morecambe & Wise in a mortuary perhaps. The rest of the work lurks behind it like a black hole ready to swallow up any cheerful soul wanting something less than an enigma. This suggests we need a biography to help us through the artifice. And these two new biographies certainly do something like that.

After reading both Anthony Cronin’s The Last Modernist and James Knowlson’s Damned To Fame, one has a more rounded impression of the man, if not the writer. Reading the novels and plays one imagines a secular monk, yet the dominant impression from both of these biographies is of a drunken, womanizing, pretentious and self-pitying young man who was good at sport and languages. I say ‘young man’ because the older, wiser Beckett is left relatively untouched. We never get very close to him. This is a pity if not also inevitable. The pre-war work is discussed at length as it tends to follow the details in the turmoil of his growth: a manic-depressive mother, psychosomatic illnesses, premature death of a genial father, archetypal Oedipal love/sex dichotomy, unchannelled talent, etc.

The later works, however, do not lend themselves so readily to such links. And these, despite the protestations of the nosy, will be the ones he will be remembered for. They are passed over almost in silence. This is not because Knowlson and Cronin are hacks interested only in gossip and obvious life-work correlations, or because the later work is lifelessly abstract, but because they are both aware of the crassness of such an enterprise. The later work is the poetry of confinement, of disintegration and ending (that is, what comes before death, which never comes). How can the biographer write about that if the man himself was so active? 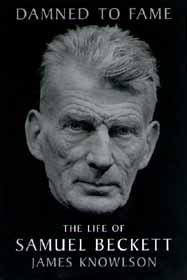 Beckett wrote about these things not so much because he experienced them, although he did, eventually, but because he observed and felt them impending all the time. A biographer can only try to understand why he felt this. In revising an apocryphal story, Knowlson gives us a hint. Krapp’s story of a Joycean epiphany on a storm-tossed shore in ‘Krapp’s Last Tape’ was thought to be Beckett’s own experience. It turns out that an equivalent epiphany did occur but in his mother’s bedroom as he watched her suffer from Parkinson’s Disease. Krapp’s epiphany is traditionally romantic; the exaltations of nature provoking a grand idea in the individual. Beckett’s real one was less effusive.

He saw how nature has ‘a calm, secret hostility’ inflicting intense pain and suffering on loved ones with pause only for what we call life. It is nothing to be celebrated. The wordy flights of Beckett’s youthful writings (that is, before he reached thirty) side-step this awareness in favour of familiar channels of talent: show-off shock tactics and autobiographical plundering. So, it is no surprise that ‘Dream of Fair to Middling Women’, the novel Knowlson and Cronin mine most heavily for information, is only available because of the author’s death. He did not want it published during his lifetime because it was too clever and derivative. Cleverness tends to be derivative. As one critic said, Beckett ‘had a lot to unlearn’.

However, such bad art enables Knowlson and Cronin to present convincing portraits of Beckett in young adulthood. This is where he had most in common with his contemporaries; he was ‘a young man with nothing to say and an itch to make’, as he said of himself. Cronin is particularly dismissive of a lot of Beckett’s early itching. He often ends quotations with ‘Whatever that might mean.’ This is refreshing after the uncritical, if not also hagiographical tone taken by Knowlson, Beckett’s long time friend.

One thing Cronin didn’t have that Knowlson did was access to Beckett’s diaries from his wander around Nazi Germany in the Thirties. These provide an important revision of Deirdre Bair’s suggestion in her pioneering 1978 biography that Beckett was ignorant of, or chose to ignore the effect of Nazi rule. The diaries reveal his awareness and disgust at their attitudes. Indeed, the people he meets are distinguished by their sympathies. And the war itself seems to have been the watershed in Beckett’s life. If he had gone home to Ireland instead of staying to help his French friends, he may have continued along familiar lines – following the trends of the times and fading as fast. However, the stoicism and near-starvation of the war years seems to have had a lasting effect. His only concern from then on was to write, be published, and write some more. Popularity was not a confirmation of importance, but pure chance. He seems to have realized that what was important was the night sky of nothingness behind the pyrotechnics of culture (a phrase of his friend onmouseover=”window.status=’Stephen Mitchelmore attempts to explain the unexplainable work of Cioran’; return true”>E.M. Cioran).

Beckett started to write in French to rid himself of as much English cultural baggage as possible. His style became radically spare. He refused the big picture. Indeed, the claustrophobia of later plays and prose is not far removed from the details of war, or at least impending war: terror, boredom, despair, confusion, gallows humour, and imprisonment. Being alone in a room with only thoughts and memories is not lifelessly abstract. It is the experience of millions of people. To label it solipsistic or elitist, as many people have, is narrow-minded in the extreme. To write from the perspective of ‘outside’, which many much-touted writers still do (Pat Barker, onmouseover=”window.status=’Spike review of Ecstasy- Three Chemical Romances’; return true”>Irving Welsh et al.), is far more abstract and non-empathetic. Even if these claim to be the voice of the lost, silenced or the underclass, their conservative attitude to language annexes the ground where these voices might speak. Their sympathy is the cruelty of the sentimental that Wilde spoke of. They silence everybody in their powerful cries from the trenches of literary tradition. 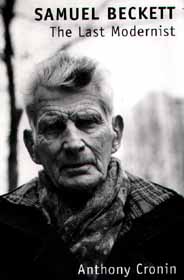 Beckett is the writer par excellence of what it is to be totally alone, separate even from the self you thought you were. Inevitably, this leads to a different kind of language; neither formal nor colloquial. For Beckett, language is not so much the meadow where the self can frolic in freedom as a No Man’s Land where it is never safe. Beckett was not one of herd play ing at freedom-loving in the tenches, but wandered the No Man’s Land like Dante in Hell. It was not a deliberate exercise. He was often surprised at what he wrote. It is not purely intellectual. It was not ‘self-expression’, more ‘unself-expression’. If it was merely the surface self, fiction would be only disguised autobiography and these biographies would be even more superfluous than they already are. Both Knowlson and Cronin are aware of this and do not try to pin Beckett’s devastating later work to what was happening in his life or his world. At least, not directly. They are aware of the acultural provenance of his inspiration. The biographies are works borne of our literary culture’s desire for short cuts, yet carry that restriction with honour.

Beckett was aware of a saying in post-war literary French circles that if an Englishman were to write a book on a camel he would call it ‘The Camel’, while a Frenchman would call it ‘The Camel and Love’. A German, on the other hand, would call it ‘The Absolute Camel’. All the books, of course, would probably be the same. Both authors reviewed here are Irish, and perhaps it is inevitable they would think of something odd for the titles of their books. And they have. ‘Damned to Fame’, despite being a phrase from one of Beckett’s letters, is a peculiarly limited title, and Cronin’s ‘The Last Modernist’ is absurd. This tempts the assumption that Modernism is an historical event rather than a virus at the heart of culture. But this is unimportant; titles of books like these are for publicity purposes only. Beyond that, the books themselves help us filter our interests. If you want rollocking sub-Joycean romps, that is, Beckett and Love, read the early work. And in terms of these biographies, if you want encyclopaedic detail, read Knowlson’s, while if you want a less reverential and more speculative read, Cronin’s is for you. If you want the Absolute Beckett, read the novels; you’ll never get any closer.