… in which Danny Boyle gussies up the true story of Aron Ralston, adrenalin fiend and extreme sports enthusiast, who got himself stuck under a rock for five and a bit days. Review by Declan Tan 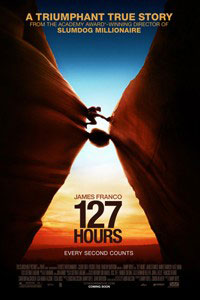 The vacant, feature-length hip-hop montage that is 127 Hours begins with an ill-advisedly selected Free Blood track (‘Never Hear Surf Music Again’), a failed attempt at excited and perhaps knowing ‘hipness’ that admittedly does fit the purpose, as the utterly nugatory feel of the subsequent experience soon amounts to another shining example of disposable, blunderbuss cinema.

Yet this is essentially what Danny Boyle does these days. Any semblance of interest in seeking truth or making art has completely vanished into a small gap between his laughing teeth. Even highly infectious (and possibly metaphorical) rage-filled lunatics have fallen by the wayside in his fast lane pursuit of sugary popcorn shifters. All has given way to flash and loud noises.

How to get over this, sitting there in the darkness with 127 Hours ahead of you?

Answer: You can’t. All the bombast up Boyle’s long, flowery and probably rolled sleeve couldn’t stop one fellow viewer snoring his way through the majority of the video. Which was confusing, as it isn’t so much that it’s boring, just that it’s annoying to almost be able to hear the grunts of thought that have gone into making every moment quite so agonising, and not in the way that Ralston must have felt, his arm lodged between a boulder and a cave wall, recycling his piss into a water bottle, hallucinating a history of regret, but agonising in its excruciatingly contrived ‘originality’.

Thus, in said manner, we’re given the brash, all-American Aron, hopping about from rock to rock, pedalling on his bicycle, regularly whipping out a video camera to capture himself on his escapades along the way. (Is this likeable behaviour?) That is all until a rock decides to land on him and his arm. And so the mystical journey of the self begins. Well, not really. Instead we’re fed this unconvincing melange of flashbacks, fantasies and apparitions that all lead full circle into one of those ‘it all makes sense now’ moments that are so fantastic and unexpected in cinema nowadays.

Every smash cut, every split-screen moment, every CGI effect with their typically Boyled-over mixture of strong colours, exaggerated framing and over-editing, only draw attention away from a probably compelling storyline, and a probably convincing performance from the chameleonic James Franco. We quickly lose sympathy with Ralston, if we ever had it in the first place, not because of his situation but as a result of the movie taking on a kind of airless sheen, empty of atmosphere and taken over by its ‘style’, becoming a form of trick itself, manipulating us into giving a toss. Which we don’t.

You’d get the same, less expensive, but probably more harrowing effect flicking from MTV every half-second to MTV Base and back again. But I wouldn’t recommend that either.