(Editor’s note: this review was written a couple of weeks prior to W.G. Sebald’s untimely death in a car crash on 14th December 2001).

In its official press release, the committee for the Nobel Prize for Literature praised VS Naipaul, the 2001 recipient, for "works that compel us to see the presence of suppressed histories". Presumably this is the committee’s mitigation of Naipaul’s notoriously incorrect opinions. Whatever, the statement is curiously ambiguous. On the one hand, it could mean – and probably does mean in this case – the particular stories of Indian and African characters previously ignored in mainstream literature. But it could also mean exactly as it says: "the presence of suppressed histories". Not the histories themselves, only their remnant haunting the language of the victorious.

Suppression is part of the history, and Naipaul’s restrained prose – more English than the English – is paradoxically appropriate: ghosts haunt aged structures. The conservative literary establishment admire the style out of nostalgia, while younger writers like Salman Rushdie reject it out of concern for the future. The latter’s champions will insist that Naipaul’s Nobel elevation signals that we have passed the literary, if not the political, affects of suppression. The only reason to use the inert language of the past is to resist change. Literature is now a pluralism, open to anyone to flood the dark corners of experience with the bright lights of an unfettered imagination. Today, the task of the writer is to keep the shining the lights. Martin Amis calls it "the war against cliché".

On first impression, WG Sebald would seem to be very much inside Naipaul’s encampment. In one long sentence on page four of his new novel Austerlitz, the narrator tries to "conjure up" an image but something else "springs to mind". Hardly the language of the avant-garde. And like Naipaul’s recent novels, there is a tendency toward autobiography and essay, as if resisting the possibilities of the poetic imagination. On page 18, the history of fortress-building around 17th-Century Antwerp is summarised: the place-names, the design theorists, the theories themselves and the futility of the enterprise. We even get a plan of one of the flower-like buildings. No matter how large the fortifications became, we’re told, they drew attention to their weakest point and so invited attack. A metaphor, probably, for this kind of reticent novel. As the story continues through ever new digressions, the weakest point is always its own purpose. Aren’t we missing something? we ask.

No reader of the book can be unaware that the narrator of Austerlitz has a similar background to the author himself. Indeed, in Sebald’s three previous novels, the narrator is much the same sensitive yet dour person. Sebald is a 57-year-old Bavarian long established as a professor of German literature in East Anglia, and the unnamed narrator is an academic who travels throughout Europe on research. He admits there are other reasons for his travelling but, he says, they are "never entirely clear" to him. On a visit to Antwerp, he visits one of the forts used by the Nazis as a detention centre for Resistance fighters during the occupation. As he walks slowly down its sinister tunnels, he recalls tortures described by two actual writers, Jean Améry and Claude Simon, the former having been tortured in the very same fort, the latter having written about a fictional character who suffered like Améry. Again one is tempted to understand this as an indirect reference to what is going on, particularly once the eponymous character of Austerlitz appears.

Jacques Austerlitz is a fellow academic met on one of the narrator’s travels. He was a five-year-old refugee during the Second World War. His parents sent him to Britain as the Nazis closed in on Prague. They didn’t escape. He ended up in provincial Wales, living in a vicarage as Dafydd Elias. It wasn’t until his school days, just before he took some exams, that he was told his real name and origin. Although the narrator is also an exile, he seems to need Austerlitz to act as a conduit for his own search, like a novelist would use a character. Most of the words in the novel are Austerlitz’s, with the narrator adding the occasional "said Austerlitz" to remind us. For the rest of the novel, Austerlitz tells his story, which means the story of his search for the story of his life: "I have never known who I really was" he says. 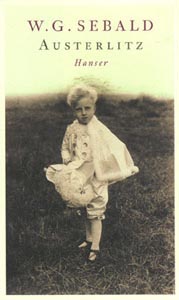 He tells the narrator that it wasn’t until he had met him that he was able to approach his past. Before then, he says, "an agency greater than or superior to my own capacity for thought, which circumspectly directs operations somewhere in my brain, had always preserved me from my own secret". With the narrator there to listen, the brain’s mechanism is disabled and Austerlitz is finally able to confront the fate of his parents. Mutual need arises out of shared interests. And as a result, there seems to be little difference between Austerlitz and the narrator. In recalling the novel, it is easy to conflate the two. Although this is a common enough thing in reading novels, here the suspension of disbelief is slackened because one is not convinced of the distinction.

Both the narrator and Austerlitz spend time describing events in their lives in which, with curious regularity, they "lose themselves" in reveries of engagement or nauseous confusion. Indeed, it happens in all Sebald’s novels; the first is even titled after such an episode: Vertigo. It’s as if these moments stand in place of the revelations the characters are seeking. For example, Austerlitz loses himself in the small print of works he is reading in a Paris library as he seeks references to his father. He doesn’t find any details but discovers, instead, "the most varied and impenetrable of ramifications" as he calls it. Rather than finding conclusions, the possibilities become almost infinite. He is released, albeit briefly, from his obscure torment. Perhaps this is why the narrator and his friend are so similar: they need just a glimmer of otherness to illuminate their individual darknesses.

We too experience this in the otherwise inexplicable use of photographs and drawings throughout Sebald’s novels. In the many reviews of the novel, very little has been made of them, perhaps it is assumed they are merely illustrative. Yet as they are uncaptioned, the reader instinctively wonders what the connection is between them and the words. It creates one’s own moment of vertigo. This had a tremendous effect in The Emigrants, Sebald’s second novel (though the first to be published). For those new to his work, it will probably have the same affect. However, by this, the fourth time, the power is diminished. Wonder becomes indifference. The same goes for the character of Austerlitz himself. His similarity to the reticent narrator means he is similarly opaque despite speaking for the most of the 418 unparagraphed pages.

Yes, you read correctly. There are 418 pages without a paragraph break. This a famous aspect of the work of the late Austrian writer Thomas Bernhard, for whom Sebald has professed great admiration. Bernhard, however, created unforgettable characters even if they seem indistinguishable from the morose author. Perhaps it is significant that not one of Bernhard’s novels are named after the main character (that is, if one understands Wittgenstein’s Nephew as autobiography). It suggests that Sebald’s concern in Austerlitz is for the mystery of suppressed histories, not for attacking the suppression with vituperative glee, like Bernhard. In both uses of unrelenting monologue, the question of what’s being left out is begged. In Bernhard this has a painfully comic affect, while here it is more tragic. Sebald’s empathy is thwarted as a result because, like Austerlitz’s own attempt to get closer to what remains unclear to him, it always produces "varied and impenetrable ramifications". That Austerlitz is an imagined character reasserts the fact, and indicates that the novel as an art form suppresses as much as it illuminates, no matter how much light is beamed into the darkness. The "war against cliché" like the other war it alludes to, is a fighting on the wrong front. Austerlitz’s opacity, then, is perhaps artistically necessary. If this is the case, it makes this novel at once a success – at least on its own terms – and a prelude to an impasse.

With Austerlitz, Sebald has continued a remarkable run. He has produced four fascinating, often mesmerising, novels in almost as many years. They are all far more interesting than those on this year’s Booker Prize shortlist. Yet one wonders how he will continue to dramatise the confrontation with what always resists direct approach without becoming boring and predictable.