Based upon journals kept during the author’s travels through Asia, the essays in The Night My Mother Met Bruce Lee: Observations On Not Fitting In read less as a search for family roots than an investigation into how society’s attitudes about race shape cultural identity. According to Rekdal, the daughter of a Chinese mother and Norwegian father, it is physical appearance and not race that largely determines one’s ethnicity and, therefore, the code of conduct one must follow. As the author’s experiences at home and abroad clearly indicate, the need for stories that serve as paradigms for behavior becomes all the more important when a person’s language, customs, and appearance are at risk of being defined by another, more dominant culture. Rekdal’s essays explore the role myth plays in shaping personal and cultural identity in prose that delicately weighs the needs of the individual against those of the public persona.

Rekdal emphasizes the ways in which myth facilitates cultural assimilation with a story about how her Chinese grandfather purchased a laundromat for the sum of one dollar to help a stranger shortly after the United States entered World War II. Mr. Y, a Japanese about to be interned in a government camp, would rather entrust his future to a fellow immigrant than risk having his property confiscated. Years later, Mr. Y returns and Rekdal’s grandfather hands over the laundromat, which has become a financial success. The story possesses all the hallmarks of a Frank Capra film, for it richly illustrates her grandfather’s magnanimity and how, during times of adversity, members of races normally opposed to each other can set aside their differences to achieve a common goal. It’s a wonderful story, only it isn’t true. 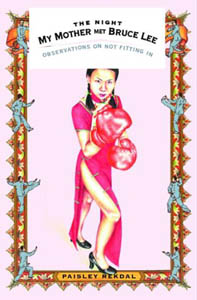 It is the ability to interpret these myths and modify them to one’s advantage, Rekdal suggests, that preserves personal and cultural identity. As further evidence, Rekdal tells of how her mother works in a restaurant alongside a "lean . . . and shaggy-headed" busboy from Hong Kong who dreams of becoming an actor. The author’s mother, as well as the other restaurant staff, find Bruce Lee’s demonstrations of "kung fooey" barbaric, for he represents a new China, one far-removed from the refined world of Ming vases and handsome calligraphy they have been taught to uphold. Lee creates an image of China that defies the accepted version of what the Chinese should be, and for this they regard him as an outcast.

In drawing a comparison between her mother’s desire to attend Smith College and Lee’s dreams of Hollywood, Rekdal debunks one of the myths American society and its immigrant populace have embraced for generations: namely, that anyone who emigrates to America can succeed if they put forth the effort. The myth of America as a land of opportunity would have us believe that both the student and the actor will achieve success, when in reality a school counselor discourages the author’s mother from completing her application, offering no better reason than "Smith is not for girls like you." Rekdal’s mother fails to fulfill her ambition in part because she does not understand the social mores that govern ethnicity and class structure, whereas Lee, who distinguishes himself from the other restaurant staff with repeated claims that he is "real Chinese," does not transgress the cultural boundaries that have been mapped out for him–at least not those established by white society. One only has to think of Charlie Chan and Dr. Fu Manchu to understand that Lee acts in a manner expected of him. As Rekdal makes clear with poignant irony, it was their cultural identities, as much as anything else, that shaped the futures of these two young people.

As her travels take her to Japan, China, and Korea, Rekdal struggles to reconcile the two cultures that represent for her, at alternating periods throughout her life, the opposite poles of assimilation and marginalization. Writing with a surprising absence of solipsism, she exposes her naïve perceptions and desires to reveal societal pressures at work. "If China was attractive it was so only because it was exotic and dangerous, because it was not and never really would be me." Rather than choose one ethnicity in favor of the other and risk becoming engulfed in the silence that marks cultural isolation, Rekdal views herself as neither white nor Chinese but Eurasian: "I am one of the people thrown simply into the mix, filling in a family and identity with–when I can’t find fact–perhaps its more truthful, emotionally potent, fiction."

The Night My Mother Met Bruce Lee is an intelligent book written with honesty and a refreshing sense of humour that allows readers to examine freely their own beliefs concerning race and ethnicity as it traverses the many cultures that comprise America.