The reader always mainlined crime fiction in front of the TV. He picked up the book. He rubbed his chin. The bristle made a noise like the crackle of fire spreading through a condo in the background . The reader said "It’s American Tabloid. It’s by James Ellroy." Cynical reader said it was just a violent re-working of Raymond Chandler. Inquisitive reader said there was more to it. He slumped into the armchair where he had whacked an American Psycho a couple of years ago. Opening the first page, he reached for a shot of bourbon and said "Impress me, Jimbo."

Such is life across the Ellroy page. Stark, occasionally violent and with a world weary smile. We’re still in America, still caught between the twilight of the fifties and the dawn of the sixties, but this time we’re at a more exalted level. American Tabloid sees Ellroy detailing the lives of the men in the background during the Kennedy years. As these men are mostly agents, shakedown men and bent politicians led with amoral example by John F. himself, they afford Ellroy plenty of opportunity to exercise his preoccupation with human frailty. If the publishers were looking for a quote for the back cover, they’d probably opt for "a conspiracy theory on speed", which would do injustice to a book whose simplicity flatters to deceive.

The figures picking their way through this network of conflicting allegiances are characteristic Ellroy anti-heroes. Boyd, Littell and Bondurant begin the narrative with clearly defined positions that gradually bleed into each other until all are on the same side. There are no good guys / bad guys here to give a moral locus – only the ones in seersucker suits who stay in expensive hotel suites, and the rest. The rest are defined by cursory but damning references to white socks, bad breath and cheap summer suits. The closest American Tabloid comes to a hero is Bobby Kennedy, and once Boyd has described him as a "chaste little piece of dogshit", you suspect where Ellroy’s true loyalties lie. 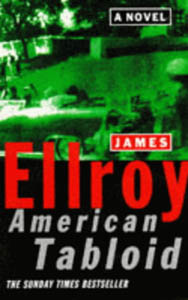 The climax is inevitable, as all are drawn in to the network of smaller conspiracies that build to create the greatest conspiracy of all ­ to bring the Kennedy administration to an abrupt end – but Ellroy ensures that the fates of his three fictional protagonists are not resolved until the last page. Loyalties change as fast as Boyd can change into successively sharper suits, shifting from FBI, to CIA to the Mob and back again as the competing factions jockey for power. It sounds like a bewildering Oliver Stone theorem, which it isn’t. The minimalism of the dialogue extends to the plot, and unlike JFK, it’s possible to follow events in American Tabloid without pen, paper and secondary source material.

With fiction as stylised as this, it is tempting to look for precedents elsewhere. You could find parallels with the casual violence of Bret Easton Ellis or the stylised minimalism of Raymond Chandler, but the raw power of Littell, Bondurant and Boyd could only be Ellroy. And his greatest achievement is to capture the prevailing sense of corruption seeping from all levels of society. There is a dizzying sense that you are adrift in a world where everything is remorselessly off-kilter. It has the same sensibility as the scene at the end of American Psycho where Ronald Reagan spouts banalities over the mantra "this is not an exit" – in this case, the banalities are those of Kennedy’s "New Frontier" programme.

The spare style does mean that Ellroy has created problems for himself when he needs to explain finer points of the plot without resorting to leading questions and huge chunks of cumbersome explanatory dialogue ­ "you mean J Edgar Hoover is in league with organised crime? Really? Tell me about it" ­ although the solution is equally unsatisfactory. The use of mock-official "document inserts" ­ clumsily presented in a typewriter font so you know that the credulous know that they are different to the rest of the book ­ quickly begins to grate. It seems oddly self-defeating to spend chapters immersing the reader in the stylish sleaze of Kennedy’s America only to yank them out of it abruptly with tape transcripts and interviews.

Although its simple, aggressive prose and lack of any paragraph longer than ten lines make it easy to dismiss American Tabloid with a derisory leer as lightweight, it is harder to dismiss once you’ve reached the end. Because by the time that Kennedy’s 1000 days in office have drawn to an end, it has seduced you. It has made you believe that you were reading some nice simple schlock-horror crime fiction while all the time you were reading a carefully enumerated rendering of the most complex and involving era in American history.