It’s no secret that the thought of wading through another chapter and verse of literary cultural dissection usually holds about as much appeal as taking a skinny dip in a bath full of female pythons with PMT. After all, how many book store shelves are stocked with feminist rant and rave from the retro rantings of Erica Jong and her infamous ‘Mile High Club’ to the self-absorption of the Prozac Ice Princess, Emily Wurtzel.

The latter author is noted for a particular reason. For Wurtzel’s journey into the pits of narcotic depression and dependency – Prozac Nation – was the quintessential ’90s beacon that declared it was suddenly okay to bare your soul, drag the reader through purgatory and still have enough verve to be crowned a cult icon for writing the definitive bible in the art of self-loathing.

Don’t get me wrong. I am a fan of Wurtzel and found Prozac Nation utterly absorbing, sadistic and brutal, (all prerequisites for a good read in my book). But, much to my surprise, it appears – on the face of it – that Wurtzel has finally found a worthy successor to her throne.

The author in question is named Emily Jenkins. Columbia University graduate, co-author of children’s novel, The Secret Life of Billy’s Uncle Myron and contributor to The Village Voice, Nerve, Swing, Fred, Mademoiselle and Glamour. It should be noted that his gal doesn’t mess around. 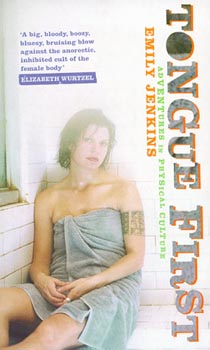 The premise of this novel is experimentation. Of diving headfirst into every conceivable vice – whether that be social, physical, mental or sexual, she dives in with courage, bravado and the essential ingredient – wit. From sampling heroin, to trying to uncover the attraction of isolation tanks (her hero and guide was naturally William Hurts’ character in the twisted celluloid flick, Altered States) to sleep deprivation, a Coney Island Freak Show, to shaving her head and immersing herself in the world of tattoos. Jenkins leaves no stone unturned.

It’d be easy to dismiss the premise of this book as fashionable exploitation. Of one woman’s quest to wring the misconceptions out of taboos. But this is far from the truth, instead presents balanced and subjective reporting on the cultural malaise of our age.

Jenkins refuses to pander to frills, gratuitous displays of evocative prose and that’s what makes this report such a pleasure to read. She takes each subject, dissects it, samples it and firmly assess why she believes we are attracted to it. She avoid preaching to the conveted (or unconverted, whichever the case may be) and arrives at her own conclusions as to what makes each sub-culture tick.

Tongue First is a fascinating piece of social research. It sets out to scrape the bottom of the taboo barrel and succeeds, and in doing so you can’t help but admire the caliber of a writer such as Jenkins.

This is a researcher and adventurer who understands implicitly the art of immersion and invites the reader along as a passenger. The only advice I could give, to what promises to be an author with a prolific future ahead of her, and providing her next novel (should it cut from a similar fabric), is to relax and call it what it is, Memoirs of A Fetish Junkie. Unadulterated and a hell of a lot of fun!