According to popular belief, the phrase “American humour” belongs in the same oxymoronic category as “military intelligence” and “virtually spotless”. We British take great delight in reminding Americans that they have no sense of irony – not because it’s true, but because it really annoys them.

American humour is, of course, in great shape, from the slapstick comedy of Bill Clinton to the surreal epigrams of Jack Handey and the knowing sarcasm of PJ O’Rourke, not to mention programmes like Frasier and The Simpsons. The cartoons of Max Cannon and the demented parodies of The Onion are among the USA’s funniest comedic exports, and UK readers can finally discover what all the fuss is about.

The Onion is one of the Internet’s most popular publications, mercilessly parodying American newspapers and frequently offending everybody. Our Dumb Century takes the same approach to the history of the twentieth century, reproducing fictional front pages from 1900 to the present day.

Very few books can reduce us to tears of helpless mirth, but Our Dumb Century does it again and again. The writers have created a parallel world to our own, where newspapers report the Apollo landings with the headline “Holy shit! Man walks on the fucking moon!” and Martin Luther King tells crowds “I had a really weird dream last night”. JFK is shot 129 times from 43 different angles, and the Russians spend seven years attempting to kill Rasputin by throwing him from churches, decapitating him, pushing him in front of trains and firing him from cannons. In one of the funniest stories in the book, the ill-fated “Challenger” space shuttle is filled with wheelchair-bound orphans, kittens, puppies and fluffy bunny rabbits before its tragic launch. Fans of Chris Morris will love it. 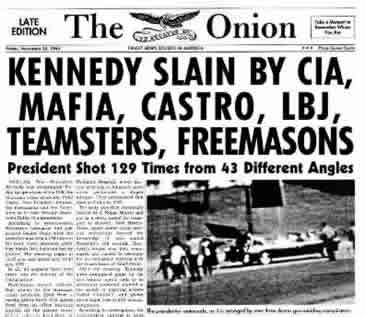 In lesser hands Our Dumb Century would be puerile nonsense, but the writers of The Onion are fiercely intelligent. Almost every significant historical event of the century is covered, albeit from a warped perspective, and the ongoing coverage of race relations and feminism is particularly biting. Other stories take in Nietzsche, cubism, Dadaists, economics and science, combining vicious swipes at the establishment with slapstick humour and very, very sick jokes. The only real problem with the book is that its American origins mean some of the stories will be too obscure for many European readers, particularly in the sections devoted to the early 1900s.

At first glance Max Cannon’s Red Meat is very different. Instead of complex newspaper parodies, Cannon creates simple three-frame comic strips, many of which contain little text and the same retro-style drawings. Like The Onion, however, Red Meat is a window into a parallel world that is uncomfortably close to the real one.

The world of Red Meat is that of small town America, and Max Cannon populates it entirely with grotesques. The sociopathic milkman plays cruel mind games on little girls, fathers share mind-bending drugs with their sons, and every single responsible adult is permanently drunk.

The cartoons contain some of the sickest humour we’ve ever seen, with burn victims, serial killers and disabled children providing many of the jokes. About as far from political correctness as it’s possible to get, Red Meat is incredibly amoral and “oh-god-my-aching-sides” funny. Although the jokes are frequently offensive, Cannon doesn’t discriminate – he clearly hates everybody and appreciates that the very best humour often comes from the very things you shouldn’t joke about. His closest counterpart is probably Jack Handey, and if Handey’s Deep Thoughts leave you completely cold then you’ll find the Red Meat cartoons utterly incomprehensible.

The problem with printed versions of on-line publications is that, in most cases, the same material is available for free on the Internet. Our Dumb Century sidesteps this problem as it only exists in printed form – it’s a spin-off rather than a collection of old articles, and as a result it’s a must-buy. The Red Meat cartoons, on the other hand, are freely available from Cannon’s Web site. It’s hard to recommend buying something you can get for free, (mind you, it must be doing alright as there’s now a second volume, More Red Meat), so we’d suggest you read the cartoons on the site and then buy the book for somebody who doesn’t have Internet access. That way, Cannon will continue to share his demented visions with his Web audience and you get to traumatise one of your friends. Result!