Colombia’s Gaviotas is a community only dreamers could visualize, and only outcasts could build. Surrounded by rebel-infested llanos (savannas) and vast coca plantations, the presence of its peaceful rhythms and homegrown technologies is as hopeful as it is unlikely. A super- efficient pump fills water cisterns every time children play on the teeter totter. Innovative lunar collectors have been designed for refrigeration. Ostracism, not jail, punishes criminal behavior, but is rarely needed in this society of no police and no politicians.

Alan Weisman’s Gaviotas: A Village to Reinvent the World furrows deeply the soil of sustainability that is both the premise and promise of Gaviotas. A veteran journalist, he first encountered this model community while living in Colombia in l988 and has been returning ever since as part of a personal and professional quest to find and publicize points of light that could illuminate a path out of impending ecological overload.

Nobel Laureate Gabriel Garcia Marquez calls Gaviotas founder Paolo Lugari the “inventor of the world.” Lugari himself shuns suggestions that he has created a utopia, saying “Utopia means, literally, no place. We call Gaviotas a topia, because it is real. We’ve moved from fantasy to reality.” And it’s a rural reality, reflecting a disillusionment with cities. Sixteen lonely hours of bumpy roads–more when mud or guerrillas slow passage– separate this topia from Bogota and the outside world.

Gaviotas was not hatched in an ivory tower, an idea perpetuated by interminable scholarly papers and conferences. It is a functioning, hands-on, socioecological work in progress, designed and constructed cooperatively by a patchwork ensemble of refuge-seeking urban visionaries, resourceful tinkerers, and indigenous Guahibo Indians. Engulfed in non-linear, barrio-meets-boondocks wisdom, they eschew blueprints, and discover solutions first; documentation and structure, if it arises at all, comes later.

“Something from the Third World, by the Third World,” explains Lugari, describing the homegrown technology of his vision. “When we import solutions from the United States or Europe we also import their problems.” And Colombians know about problems. They’ve been enduring the injustice and brutality of a narcocratic system for decades.

In chronologically choppy but colorful prose, Weisman presents a tumbling mountain waterfall of this community’s ideas and inspirations. He skillfully weaves the story of each significant participant into Gaviotas’ tapestry; what inspired their involvement, what they brought and learned there, how they came to stay, or move on. Against the unavoidable backdrop of Colombia’s insurgents as well as its opportunistic politicians, Gaviotas is constantly portrayed as a scrappy survivor always one step away from being consumed by fires unrelated to its mission but integral to its context.

Visionaries are often cast fictionally. The Fifth Sacred Thing, We, Brave New World, even Atlas Shrugged, show that in model societies the implausible is always possible. Weisman makes Gaviotas sound almost fictional; sometimes writing like a novelist, he folds reality into surreality, and back again. Projects on the brink of failure are suddenly fine-tuned into successes. Just as the money runs out angels with checkbooks swoop in to save the day. People facing handicaps are nurtured instead of ridiculed. More non-fiction should look–or better yet, BE–like this.

The progression of their topia from vision to viability constantly forces Gaviotans pay heed to the delicate ideological lines of Colombia’s turmoil. Founder Lugari says, “We’re not communists. And we aren’t a commune either…We’re not ideologues. All ideologues do is start trouble.” Practically, this ambiguity is an asset. During a visit by armed rebels seeking their support, confrontation seemed eminent until the rebel commander said, “We have orders not to touch you…what you’re doing is too valuable.” 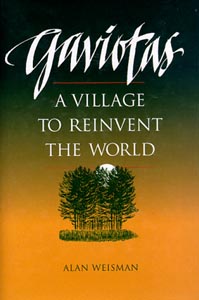 Wiesman occasionally discusses Gaviotas’ precarious finances, and its past funders, who range from individuals to the United Nations. But from the beginning, its founders have said if they cannot evolve true sustainability and ultimately pay their own way, they would fail. Early experiments with appropriate technology coalesced into a cottage industry for the construction of low cost water- heating solar panels and wind turbines. A Bogota factory extends the Gaviotas mission into the urban wasteland by employing dozens of former street kids in the construction and sale of such renewable energy hardware.

Current components in their evolving economy include cultivation of organic coffee and selling purified water to nearby communities. A recent and ambitious endeavor is intended to lure coca growers into legitimacy through the growing of medicinal plants that can sell for up to $500 a gram. They also require little of the political baggage and weaponry that narcotraficantes normally must lug to protect their profitability.

Perhaps their most significant triumph clearly illustrates the beauty and synergy of Gaviotas. They discovered that Caribbean pines held the key to their future. Fast-growing exotics, the pines were planted years before when Gaviotas was treeless, following long discussions of the ecological implications of their planting. Resin from the maturing trees provides a natural alternative to petrochemical solvents, and growing worldwide demand for it was outstripping supply. A new industry was born as they began tapping the trees for this renewable resource. Suddenly, they had a long term economic base, and began planting more trees, across the savanna.

Besides providing an economy, Weisman writes, “the pines have also created what biologists call an unimaginable miracle. In their sheltered understory, a tropical forest not seen for millennia in these savannas has regenerated, restoring the habitat of already proliferating deer, hawks, and anteaters.” Noting the vast expanses of similarly treeless savannas in other tropical regions of the world ripe for similar rebirth, Lugari explains, “Everywhere else they’re tearing down the rainforests. We’re showing how to put them back.”

Weisman generally avoids discussion of personal conflicts and other negatives that could reflect poorly on this community. Even paradise has its imperfections. But why NOT overlook the shortcomings–none of which have been fatal–and portray Gaviotas as positively as possible? Progressives well-versed in the rhetoric of skepticism sometimes need to be reminded that though all that glitters is not gold, we’re still allowed to celebrate victories. In a world dominated by linear thinking and specialists, the fact that the creative generalists of Gaviotas are succeeding–and inspiring others to emulate their innovations–is clearly reason to cheer.