Well, it had to happen. Lara Croft, star of the Tomb Raider videogames, gets the coffee table treatment in her own glossy picture book. In an attempt to give this tome some literary gravitas, “Generation X” author Douglas Coupland has been drafted in to provides thoughts about the Lara phenomenon and a story too.

Laraâ€™s Book feels like a mish-mash of various marketing ploys. Thereâ€™s lots of new pictures of Lara herself to appeal to fevered adolescents, strategic walkthroughs of the various Tomb Raider games to help those whoâ€™ve got stuck somewhere along the line, interviews with the gamesâ€™ developers about how Tomb Raider came into being, all topped off with Couplandâ€™s prose to maintain Laraâ€™s cool quotient with the lifestyle crowd.

Itâ€™s easy to see why Coupland agreed to be involved with what is essentially another form of the Tomb Raider franchise. Lara Croft is the perfect representation of his love for pop culture and technology, with her movie-star status as a cultural icon throwing up various questions about the blurring of realities, both virtual and normal. 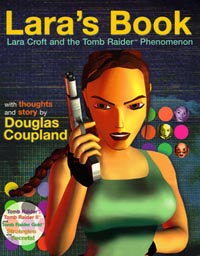 Couplandâ€™s disappointingly brief prose moves in the same territory as his novels, taking something as inconsequential as a videogame and expanding it into nothing less than a metaphor for life. His skill as a writer has always been in making such assertions seem strangely appropriate rather than asinine, but here Couplandâ€™s meditations only serve to make the vacuity at the heart of the Tomb Raider phenomenon even more apparent.

Thereâ€™s a distinct sense that thereâ€™s actually precious little to say about Lara. This is indicated by the fact that far more space is given over to the game-solving tips than to Couplandâ€™s writing, despite his name being flagged prominently on the front cover. Once you get past the idea sheâ€™s a female character in a video game thatâ€™s sold lots of copies, thereâ€™s not much left. Even the game developers can offer up little else beyond the observations that they wanted people to identify with Lara and for her to be “almost a fantasy object”, which is hardly the stuff of profundity.

Among the bookâ€™s hyperactive layout there is a spread of various fan letters that have been sent to Tomb Raiderâ€™s creators Eidos. Itâ€™s virtually impossible to read whatâ€™s written in the letters, which is a pity, because the opinions of Laraâ€™s fans would probably have shed some real light on her popularity.

Instead, Laraâ€™s Book is simply another addition to the Tomb Raider hype. Those trying to find out why Tomb Raiderâ€™s central character has caused such a fuss will be disappointed, because ultimately Lara Croft is a sphinx without a secret.