For a short time, I used to stay up most of the night. In the long summer months between school years there was no all-night radio let alone all-night television. To pass time, I would listen to the BBC World Service on poor Medium Wave reception. One night around two in the morning, an actor with a mellifluous and slightly effeminate voice read out a half-hour extract from what I now know as "Swann’s Way", the first part of Marcel Proust’s multi-volume novel "In Search of Lost Time". Next day, as I played football in the local park, I told my friends of this daft book that took half an hour to describe someone ringing a doorbell. Inside, however, my dismissive tone was tempered. Secretly, I was impressed. The following week there was an extract from another part of the novel, of which I have no memory, and in the third and final week, he read the section known as "Albertine Asleep". And I taped it. The tape still exists.

"Stretched out at full length on my bed, in an attitude so natural that no art could have devised it, she reminded me of a long blossoming stem that had been laid there; and so in a sense she was: the faculty of dreaming, which I possessed only in her absence, I recovered at such moments in her presence, as though by falling asleep she had become a plant. In this way, her sleep realised to a certain extent the possibility of love: alone, I could think of her, but I missed her, I did not possess her; when she was present, I spoke to her, but was too absent from myself to be able to think of her; when she was asleep, I no longer had to talk, I knew that I was no longer observed by her, I no longer needed to live on the surface of myself."

Marcel goes on to use her sleeping body for "less pure" purposes. Undoubtedly there is something pathological going on here; a voyeuristic absorption where there is only the possibility of love. Yet within his apparent solipsism, the world opens up to Marcel. Albertine too is not living on the surface of herself, no longer acting. He is able to love her for herself. But which self is that? "Races, atavisms, vices reposed upon her face" he exclaims. To a certain extent still, she escapes him. Yet as the similes of plantlife suggest, watching her sleep was almost to connect with a self so deep as to be dispersed within nature. Hence Marcel’s sudden loss of interest in the letters tucked into Albertine’s discarded kimono.

Until that time, access to such intimacies would mean getting the information necessary to confirm or deny his tormented imaginings about her life away from him (he suspected that she was conducting other – Lesbian – affairs). But at this time, they are irrelevant. Nothing in their relationship is resolved, but in his contemplative reverie, jealous love abates for a while and perhaps begins to die at last. And that’s what the novel is all about really: the process of love. The extraordinary length of the book enables us to experience that process. It’s not a matter of gaining knowledge alone but of realising how that knowledge is gained. Marcel learns the heart’s lesson, and says, at the end of the novel:

"Ideas come to us as the successors to griefs, and griefs, at the moment when they change into ideas, lose some part of their power to injure our heart; the transformation itself, even, for an instant, releases suddenly a little joy."

So for him, genuine happiness is not achieved by rushing for one of the poles of that fin de siecle – the ivory tower and the brothel, which, incidentally, are also the poles of this fin de siecle. It’s a space between, just as "In Search of Lost Time" is somewhere between essay and lyric.

If we see the novel as the story of the discovery of this truth then a biography of the author is superfluous. No matter how many letters the biographer could extract from Proust’s metaphorical kimono, the inner truth of his life would be retained in the novel’s moments of inspired contemplation. Of course, many biographers regard it as their duty to raid the kimono and present the abstractions we call facts, which in this case would be: Proust the mummy’s boy, Proust the sycophantic social climber, Proust the closet homosexual, Proust the asthmatic recluse with a private income. Books with these facts, about other artists, appear each week, enabling one to discard the actual works of the subject. But thankfully, Jean-Yves Tadie has learnt with Marcel. His 800 page archaeology traces the ‘necessary metamorphoses which exist between a writer’s life and his work, between reality and art’. It’s appropriate that these are actually Proust’s own words, as they sum up Tadie’s faithful approach. He argues that Proust’s first novel, "Jean Santeuil" –superficially very similar to the later work – was abandoned because, by sticking to the facts of autobiography, it distorted the vision he wanted to impart. 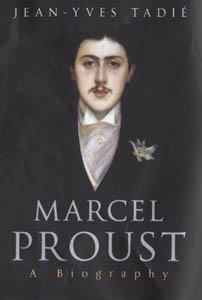 In the introduction, Tadie claims not one insignificant fact concerning the metamorphoses is included in the biography. As it turns out, there are a lot of significant facts. And it makes for slow going on the page-turning front; this is not a biography for the Alain de Botton crowd. In a way, this a shame as most biographers see it as their purpose to bring the subject alive. Not this one. However, at one point, Tadie does quote an eye-witness’s description of Proust’s ghostly pallor around his large, sad eyes as he makes a foray into the Parisian night. It may not have much to do with the growth of the novel, but the man’s presence is felt. It is very welcome.

And when Tadie tentatively brings up Proust’s rumoured brothel fetish (having rats stabbed with pins), one breathes a sigh of relief: at last, gossip! Not that the whole book should descend into endless speculation, of course. But aren’t eye-witness reports almost as important to a biography as watching Albertine asleep was to Marcel? Despite his bedside discovery that love has little to do with "the girl with the raven hair" in herself, he realises that the death of anguished love would mean the end of desire for knowledge in general. Albertine’s teasing distance and Marcel’s resultant jealousy are necessary detours to understanding. For this reason, he gets as much pleasure from seeing Albertine wake up as sleep: the process continues. In Tadie’s book, I needed more of a woken Proust. At one point, he refers to Cocteau’s description of Proust’s voice, yet doesn’t reprint it! What a tease.

There are compensations however. The chapters on the influence of Anglo-American influence on the young Proust, are particularly fascinating. Tadie shows in detail how the works of Emerson, Carlyle and Ruskin inspired devotion before being enfolded into Proust’s mature philosophy. It is a philosophy dependant on the constant revisions caused by the shocks of life. In impressive (and exhaustive) attention to detail, Tadie takes us through the shocks that helped develop the man and then the novel. The latter include publishers’ doubts or indifference, increasingly poor health, and the First World War. But the major influences would be the death of his mother and his pathetically unsuccessful love life.

His mother’s death is anticipated in the famous bedtime kiss passage in the novel, while the love life is more shrouded. From Tadie’s research, we learn he was particularly attracted to working-class men, whom he employed as servants, often with their wives, just so he could be close to them. His was a polite love, it seems: Tadie says "Proust possessed nothing and no-one". Perhaps as a result, he was generous beyond his means as he tried to win favour. He bought Alfred Agostinelli (the major component of Albertine) a light aircraft, which he proceeded to crash into the sea off Marseilles, killing himself. We’re told that Albertine’s name is mentioned 2360 times in the novel. This demonstrates that loss was confronted head on, so at least a little joy might be redeemed. In summing up Proust’s aesthetic, Tadie says: "He did not believe that happiness was to be found in a sensation experienced in the present moment, but rather in the recollection of a sensation, in the link between present and the past." It is not to be confused with nostalgia. When I listen to the tape of "Albertine Asleep", it is not youth I recover, but hope.