Noam Chomsky was right, and Bill Hicks was a visionary. While we’re all distracted by politics, the world is actually being controlled by an unelected and unaccountable organisation with the power to make or break entire nations.

The premise of Iain Banks’ latest novel will delight conspiracy theorists everywhere. Kate Telman is a senior executive within The Business, a massive organisation that predates the Catholic Church and briefly owned the Roman Empire. With a permanent base in Antarctica, The Business now intends to purchase its own country in order to join the United Nations. As Telman discovers more about the internal workings of The Business, she uncovers a trail of corruption at the very highest level.

Fans of Banks’ sci-fi work will find distinct parallels with The Culture, a pseudo-political empire (similar to the Federation of Star Trek fame) that oversees entire galaxies. Indeed, many of Banks’ favourite themes are present in The Business, notably his love for classic cars – one character seems to have been created purely to allow Banks to mention as many of his favourite vehicles as possible. A pivotal scene where Telman tortures a Ferrari’s engine to annoy a villain is presumably meant to shock us but, unless you’re an aficionado of classic bits of metal, you’re unlikely to be moved. 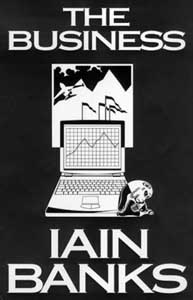 Much of the criticism aimed at The Business has highlighted the occasional pop culture reference and, while the mentions of Catatonia and South Park don’t quite gel, it’s not as if Banks has tried to add “hip” references throughout the book. The problem is more to do with the novel’s characterisation – the characters don’t jump vividly to life as they do in Banks’ previous novels, and the corporate baddies are little more than stereotypes.

The Business is well written and is certainly a page-turner, but the strange undercurrents found in other Banks novels are sadly absent. Interesting premise aside, the story itself is a run of the mill thriller, with a feisty lead discovering evidence of corruption in high places and, of course, bringing the villains to justice. It’s a template that’s been used by almost every Hollywood thriller ever made and, like a Michael Crichton novel, The Business feels as if it’s been written as a screenplay rather than as a novel. The locations are a cinematographer’s wet dream, from crumbling stately homes to winding Swiss roads and Tibetan mountain ranges, and the dialogue is stilted.

Iain Banks has already demonstrated that he can turn his hand to almost any genre he chooses and, with The Business, he proves that he can write airport blockbusters with the best of them. It’s an enjoyable enough read but fans of his spikier, more idiosyncratic work are likely to be disappointed.