Although the subject matter seems similar, All Quiet On The Orient Express is much darker and more rewarding than its predecessor. The narrator is on holiday in Cumbria, sorting his head out before embarking on a trip across Asia – the Orient Express of the title. As the season draws to a close, he finds himself the sole occupant of a rural campsite and agrees to do a few odd jobs in exchange for rent. Before long he becomes part of village life, joining the locals in the pub and even becoming part of the darts team. As time passes his reasons for leaving become vague and, when he finally decides it’s time to go, he finds himself trapped between the benign malevolence of the local farmer and his own decency.

While Mills’ first novel was very funny, the ever-increasing body count and slapstick humour delivered the majority of the laughs. The follow-up relies more on characterisation, drawing you into the story with a dark, dry humour that lulls you into a false sense of security – just as you think you’ve got everything figured out, Mills delivers a killer twist that will have you giggling for days. In The Restraint Of Beasts the slapstick carried you along; in its follow-up, you become embroiled in the novel and feel a great deal of sympathy for its protagonist. 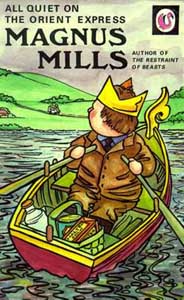 Magnus Mills has a keen eye for human nature, and his portrayal of the narrator as a nice bloke who doesn’t want to offend anybody is beautifully realised. As the agendas of the locals begin to become clear, the narrator’s desire to please and to fit in becomes squirmingly realistic. To the reader, it’s obvious that the character is being exploited by almost everybody he meets; the narrator, however, attempts to rationalise and excuse the situation, consoling himself with the thought that his predicament is strictly temporary.

The power of All Quiet On The Orient Express lies in the accuracy of Mills’ observations – while you laugh at the increasingly difficult predicament the narrator finds himself in, you’re also vividly aware that you’d probably act in much the same way if you found yourself in similar circumstances. The novel gently mocks the very cornerstones of “Englishness” – the desire to fit in, to be nice to people and, above all, the desire not to cause a fuss.

In a way, Mills’ two novels follow a similar pattern to James Ellroy’s work – although they write about very different situations and characters, both writers revisit the same literary territory in each successive novel, refining their observations and creating a world that is very much their own. Both writers stand or fall on their ability to create characters that jump from the page, immersing you in their world and making you feel as if you’re actually there to witness the events described in print.

All Quiet On The Orient Express is blackly funny and once again demonstrates Mill’s ability to combine observation and surrealism to uncomfortably comic effect. It also proves that, far from being a one-off, The Restraint Of Beasts was just the first salvo from an extraordinary new talent.