The Coen brothers are responsible for some of the most impressive feats of cinematic lunacy in recent years, from the slapstick of Raising Arizona to the pastiche of The Hudsucker Proxy, and this book is the first attempt at highbrow analysis of their films to date. Although the profusion of photographs and widely-spaced text makes the book look more weighty than it actually is, the 250-odd pages still manage to contain enough informed criticism to make your brain hurt for several weeks.

Like most similarly intellectual tomes, Joel and Ethan Coen suffers from an overly analytical approach to its subject matter. While the short descriptions of each film are laugh-out-loud funny and demonstrate how bizarre the Coen brothers’ plots can be, the latter parts of the book soon become bogged down in lengthy Freudian analysis. Rather than taking comic set pieces at face value, the authors are determined to find Oedipal conflicts and criticism of capitalism in almost every frame.

One of the Coen’s key strengths is the way in which they marry their extensive cinematic knowledge with their sick sense of humour, creating scenes where kidnappings end in slapstick or Jeff Bridges is tortured by squeaky-voiced German nihilists. According to this book, the nihilists don’t throw a marmoset into Bridges’ bath because it makes a funny incident – rather, it’s a symbol of the character’s recurring fear of castration. While the weighty analysis is certainly well argued, the authors’ po-faced deconstruction of every aspect of the Coen’s films misses the humour of evil bounty hunters throwing hand grenades at small furry animals, or villains being fed into wood chippers. 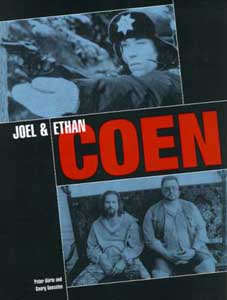 While the closing analysis – long-winded and often impenetrable – can be wearing, the earlier chapters are much more interesting. The comparisons between Barton Fink and The Shining, The Hudsucker Proxy and the works of Capra and Welles are illuminating and thought-provoking, demonstrating the sheer range of influences from which the brothers choose their plots and characters. Körte and Seesslen have clearly done their homework, and even the most cine-literate reader will find plenty of food for thought in the detailed explanation of specific scenes. The use of unusual camera angles and locations is described in depth, and recurring themes that many viewers may not have spotted are exposed and explained. Readers unfamiliar with the way in which sound and cinematography can transform the viewing experience are likely to be enthralled, largely because in this section of the book the authors drop their egg-headed approach and demonstrate a real enthusiasm for their subject matter.

The interview at the beginning of the book is telling, with a number of preconceptions dismissed (nicely) by the brothers. Nonetheless, the authors are undettered by Ethan Coen’s comments that the brothers’ Jewish background is essentially irrelevant to their filmmaking, and the analysis of Barton Fink makes a number of throwaway comments about John Goodman’s deranged serial killer reflecting some race memory of Auschwitz. Unsubstantiated comments such as this don’t help the book’s credibility and, by the time we’re into Oedipal myths and the various facets of post-modernist theory, few readers will have the masochism to continue.

Rather than buy this book, you could rent Fargo and Raising Arizona, with enough change left over for a few cans of beer. See you in the video shop, then…