Jimmy Tarbuck, the no-nonsense Scouse comedian, was on a chat show a few years ago and was asked what kind of reading he preferred. Without pausing to reflect he said, or rather bellowed, “Pure escapism!” He didn’t elaborate. You wouldn’t expect him to. Actually, he repeated the phrase, perhaps impressed by the sudden acquisition of critical acuity: “Pure escapism!” His answer troubled me. What was being escaped, I wondered. As it was a chat show, answers weren’t on the agenda and the host carried on about something else. Of course, if he had pursued the issue, the ratings would have declined as the audience pursued “pure escapism” on another channel. With no answer for me, however, the problem remained on my mind.

After reading this book, I realised why I was troubled: Tarbuck wants literature to escape words as well as the world. This had not occurred to me. The words allow him to suspend his bellowed belief in their unworldliness, allowing an escape into another world. But the possibility that words might construe his belief in the primacy of the real world, in the same way as it facilitates escape into the other, is not admitted. Indeed, it cannot be admitted without suggesting the possible interdependency of real and written worlds. The implications of such a possibility, resisted by Tarbuck, has led to what we might call the literature of suspicion, where doubt hinders every move toward plain truth (think of the daunting classics of modern philosophy) as well as to the literature of pure escape. This opposition is usually referred to as “Highbrow” and “Lowbrow”. However, because neither wants to contemplate any alternative, both positions are essentially the same.

Gabriel Josipovici’s new critical work suggests as much. On Trust: Art and the Temptations of Suspicion is an investigation into how admitting to the unworldliness of literature might yet still allow free range into truth. “The problem”, the author says, “is how to keep suspicion from turning into cynicism and trust from turning into facileness”. Initially, the suspicion of literature described in the book seems to be a problem of our century’s worst events rather than Tarbuck’s everyday psychology. After all, the mechanised slaughter of the First World War prompted the challenges of Modernism, and the atrocities of the Second prompted Adorno’s infamous phrase that “to write lyric poetry after Auschwitz is barbaric.” But this book pursues suspicion of art deeper into the roots of our civilisation.

Josipovici traces the turn away from trust as far back as Plato’s response to Homer and St Paul’s to the Bible. Plato turned the gaze of reason on The Iliad and found it wanting, while St Paul took strict moral lessons from Old Testament stories where, as Josipovici show us, there is only ambiguity. Both responses indicate a radical shift in consciousness, one that we are still mired in. The essay on Homer’s epics and Greek tragedy reminds us of what came before. Josipovici calls it ‘the double vision’: “a sense of life in all its goodness, happiness, abundance; and death as finality, which must be accepted as part of that abundance.” Despite our promisingly Godless age, this sense of life and death remains alien, probably because there is a space left by God’s departure. We would rather have this space for our purpose than be void of purpose, to rephrase Nietzsche. Josipovici says this is the legacy of Plato’s and St Paul’s removal of death as finality. Without the immortality of the soul, the real world of goodness, happiness and abundance comes under suspicion.

Emphasis is then placed on the individual. He or she is subtly dislocated from the communal tradition. As a result ‘a whole new world of inwardness’ is opened. Hence the rise in Confessional literature (St. Augustine, Rousseau), something still mistaken for the deepest possible insight. Josipovici sums up this shift in a startlingly sweeping passage:

“[the] denial of the dual vision … in the end entails a denial of the world we live in and, ultimately, of ourselves as embodied beings existing within that world. Yet such is the nature of suspicion that, once unleashed, it appears to produce a totally convincing and self-consistent world, not simply an alternative way of looking at things but the only way there can possibly be.”

This is remarkable because it questions the cultural traditions of two millennia. Yet it is precisely tradition that Josipovici sees as the way to resist suspicion. For despite the internalisation of the shift inward, the legacy of the ancients remained enough to appear in the work of the most profound artists; Dante and Shakespeare in particular. They show how we can always turn to the past for help. These writers appear as pivotal in the history of Western literature, and so too in the story this book tells. 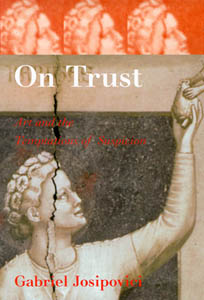 In spite of working within a craft tradition, both writers managed to include in their work the sense of its breakdown. Dante’s troubled yet necessary move away from Latin into vernacular Italian was made with the help, literally and fictionally, of Virgil, and Shakespeare adapted stories of Kings losing authority (Richard II and Lear being the examples here) to represent the ‘essence of a vanishing world’ – that is, the tradition of consensus turning into one of authority – although of course ‘authority’ necessarily destroys tradition; authority asserts. Without consensus, the old forms were compromised, and there wasn’t any ready-made replacement.

What fascinates Josipovici is the way Dante and Shakespeare renewed their respective arts without denying this change. They did not become sterile artists asserting dead formulas, nor did they lapse into silence. Their Romantic descendants, on the other hand, were plagued by both sterility and silence. Even those who did manage to create something found it was not what they expected. Wordsworth’s major work is only the prelude to a grander work that never got written, and Coleridge’s most powerful poems were about the loss of his poetic sensibility. The Great Work became increasingly difficult to conceive, not because everything had been done already, but because the limits provided by consensus had disappeared, and this is a double-edged freedom: having no limit is also a limit. It is a condition we are still with. Wordsworth and Coleridge managed to achieve something only in the questioning of their authority. Josipovici shows this was done as a response to the change, as Dante and Shakespeare had responded before them. Implicitly, it refutes Romantic notions of the centrality of individual psychology and biography.

Still, however, our culture assumes personal authority to be the pinnacle of artistic achievement. So the popular awareness of the Romantics remains one of ‘self-expression’ – the assertion of the self in response to some daffodils. That ‘self-expression’ is a limited anarchy may explain why contemporary art has lost the respect it once had. As art strives for the greater truth, it has to admit to its limits – words on a page – and thereby undermine its authority. Many budding artists, discouraged by this paradox and keen to appeal to the newly suspicious public, accept that writing is only a plaything, a place of escape, mitigated perhaps by social or historical relevance. The best thinkers turn instead to disciplines (the very word reveals its attraction) such as science, politics and philosophy, where the truth does not have to rely on words (so they assume). Literature gets Irvine Welsh.

So, when Josipovici reaches the Twentieth Century, the pressure is at its peak. Literature has lost much of its pre-eminence; it has been superseded by other forms. Yet perhaps those who claim that film is the most important art of the Twentieth Century are right only in the way they are right if they say that Totalitarianism is its most important political system. Film, like a tyrannical regime, depends on appearances. It bears no reflexive commentary. Literature is different. Josipovici shows how three otherwise very dissimilar Twentieth Century writers responded to their suspicion of art with reflexive commentary. Now this can often lead to a novel without narrative tension, it’s what gives ‘experimental’ art a bad name, but what makes Proust, Kafka and Beckett special is the tension within their work. Josipovici argues that this is the tension between extreme suspicion and the miraculous trust of each writer in the act of writing.

In the first essay, he makes this point in exhilarating fashion by showing how Paul de Man, a famed modern deconstructor of literary pretension, misread Proust to such an extent that Proust becomes the deconstructor of theoretical pretension to come. What De Man disapproves of is Proust’s openness to change, traced over the three-thousand pages of In Search of Lost Time, when he should be demanding single, certain truth. De Man is, Josipovici persuades us, an unwitting Romantic who has mistaken disillusionment for truth. Proust, it seems, is the true realist, helping us to see the overall shape of life, where change and death are central, obscured only by our everyday abstractions of reality. “In our daily life, we are too busy, in too much of a hurry, to respond fully to people or places”, Josipovici writes. “It takes death to jolt us out of our abstractions, to make us realise what the person really was in the fullness of their being. Death or art.” This reminds us of his reading of Homer. But whereas in ancient times such jolting gravity came lightly, as it was internalised, with Proust and the other Modernists it had to be achieved, like a game already lost in advance; something we resist instinctively.

The essays on Kafka and Beckett are equally illuminating. In each, Josipovici makes close readings to show how their work moves forward without lapsing into cynicism or facileness, or if it does, how each writer learns from it. It reiterates Joyce’s words about mistakes being the portals of discovery, at least to a genius. But perhaps they are geniuses because they learn. And perhaps true learning requires an element of trust, an element of self-sacrifice. This would complicate applications of, say, evolutionary psychology to the production of art. Still, one might see this term “trust” representing the author’s hesitation before commitment in that it is a nebulous term, and also Romantic. Plato and St Paul would then have good reason to be suspicious. Perhaps. But at least it follows its own logic in not prescribing a certain kind of art and instead leaves future artists to find their own way. In the meantime, “On Trust” helps us toward to the space where this rare art might emerge, a place that turns out to be not one of mystical revelation, but as ordinary as life and death itself, and perhaps all the more revelatory for that.