“Oh my god – this couple just turned around and gave me a dirty look!” Annabel Chong giggles like a schoolgirl. “It’s like, no sex please we’re British.” Perhaps unwisely, she’d stepped outside her film company’s noisy office to do this interview in the street over her mobile phone, and had spent 20 minutes chatting chirpily about blow-jobs and erections. Strange that she should be so easily embarrassed, mind. Ms. Chong’s claim to fame is that back in 1995 she set a new world record by having sex with 251 men in ten hours, the whole event being recorded on film and subsequently edited down to a brisk four hours to become a bestselling hardcore porn vid. Also on hand was a documentary crew making Sex: The Annabel Chong Story, which was the hottest ticket at the last year’s Sundance festival of independent film.

She has always insisted the big gang-bang was a feminist statement, turning the tables on men to reduce them to a succession of cocks of varying degrees of tumescence. There’s a debate to be had about whether pornography degrades women, and whether the appropriate response is to degrade men right back again. But it’s a monumentally boring one. Everyone knows where they stand and if you really want it rehashed once again, leave Spike right now and turn to the Guardian women’s page, where they’re certain to oblige. Opportunities to interview porn icons, especially those as articulate and forthright as Annabel Chong, are few and far between, so I decided to seek answers to the questions people really want asked. After polling a handful of mates of both sexes, who may or may not be more sleazy than the average Spike reader (you decide), I found these boiled down to variations on four themes. Let’s get them out of the way before we go any further. 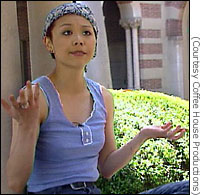 So Annabel, did you come? “Sporadically, I did. But it’s very much like running a marathon. You go through stretches where it’s just incredibly boring, incredibly awful. And you get to certain stretches where you’re just running on air. That was where I really got into it and enjoyed it. I’ve always enjoyed extreme sexual situations, and this was certainly one of them. There are some people – they may not be Tom Cruise, let’s say – but they’re very comfortable with their bodies and their own sexuality. I find that ultimately more attractive than a stud who’s just neurotic about what he looks like, posing in front of the camera and losing his hard-on. That’s just not very appealing, is it?”

What proportion of the men failed to get it up, then? “About 66% were not able to perform. And between you and me, I would have to say that if I were a bloke I would have tremendous difficulty performing. I think I’d get this performance anxiety attack and just fail. And up to this day, I really wonder why a lot of the men decided to do it. It’s bad enough to fail but it’s even worse to fail on video, where their grandchildren could check it out: ‘Oh my god, grandpa’s such a loser. He couldn’t even get it up.’ Terribly embarrassing I would think.”

I’m sorry? “You know, the United Nations. You get a little bit of everything. A little sampling of every single shape, size and, you know . . . colour, I guess.”

Weren’t you terribly sore afterwards? “Well, in actual fact if you watch the four-hour gang bang tape itself, you will realise that a lot of the things were fudged in editing to make it look as though more sex took place. So it really wasn’t that many men.”

Hang on. It says here that there were 251 of them. Have we been diddled? “But they just moved them along really quickly. There was some humping, but not quite that much. It’s actually less sex than if a woman is having sex with a man for 10 hours straight. Now that’s a lot of sex.”

Annabel Chong was born Grace Quek (pronounced “quake”) in Singapore, 1972. Her Christian parents (mum’s a piano teacher, dad’s a schoolteacher) sent her to convent school and encouraged her to study law but her “dwindling religious faith and burgeoning sexuality” were already causing problems. In a traumatic ritual, she was exorcised in a local church at the age of 17. In 1991, she moved to London to attend King’s College and thence to America and the University of Southern California, where she was so enraged by feminist theory that she took to porn as a kind of practical adjunct to her gender studies course.

Although she still has a tendency to address each question as though it were one of her college essays, to be fielded with maximum cultural studies jargon, Annabel/Grace (“‘Who am I?’ is a question I constantly ask myself”) now seems a great deal more assured than she does in the film. “It’s rather mortifying to look back and think to myself, oh my god, was I that vulnerable?” she admits. “But maybe I was.”

Even more worrying, we learn that not only has Bowen yet to pay her the $10,000 she was promised to take part in the gang bang, but the assurances she was given about the men being tested for HIV were untrue. “I was terribly disturbed by that. I felt extremely betrayed by the fact that they didn’t take the health precautions I thought they did,” she says angrily.

Late in the film, it’s revealed that she was gang raped while in London in 1991. The viewer is invited to conclude that her penchant for group sex flicks (‘I Can’t Believe I Did the Whole Team’, ‘All I Want For Christmas is a Gang Bang’) is born of a desire to regain control over this part of her life. She thinks that’s too simplistic an explanation. “Nobody ever does anything for any single motivation. I felt that it was a cop out for Gough to say that A caused B, because there’s actually more of a story behind the entire rape event. The immediate outcome of it was that I was sent through the legal system and National Health Service counselling system, which was incredibly dehumanising. I felt that I was nothing but a statistic. Then I looked back on my entire life in Singapore and realised that all my life I had been processed. I led the perfect life. I went to all the right schools, I attended the right social functions, hung out in the country club, went to church, got the humanities scholarship. I was the perfect child, but none of it was really my choice. First thing I did was to quit law school and go to art school. It was a big issue. My relatives, bless them, actually called my parents to offer their condolences. ‘She’s going to starve. We feel so sorry for you.’ So it affected me in the sense that control became a huge issue in my life. I think what you see in the documentary is the process of regaining control, and it really is a work in progress. Even today, I’m asking myself whether I’m in control of situations.”

These days she’s made up with her parents, who were unaware of their daughter’s novel career and a little baffled by her popularity when the documentary was being filmed. Partly as a result of her experiences of being exploited in front of the camera, she’s now decided to go behind it, producing her own porn. And she’s on a crusade. “What I’m trying to do is to target market my product towards a younger crowd, which no one is really addressing right now. Or at least to make it more contemporary. I mean what’s up with the big hair? It’s so over. So eighties.” 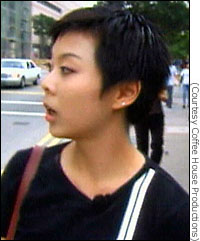 Do you really think porn consumers look at the hairstyles though, Annabel? “Well, if I was a bloke, I wouldn’t want all that frizzy hair crackling all over my blow-job. It just seems rather intimidating. It’s like being blown by a hedgehog. I don’t think it’s very aesthetic. Men have to have jerk off somehow. They need to have a wank over some images of people getting it on. They’re just going to buy whatever’s out there. And if there’s product out there that’s done rather well – like the films from the ’70s, which I really admire – the women actually do look like women, which is kind of nice. Because nowadays the women don’t look like women – they look like drag queens. And half the time I’m just sitting there thinking, they don’t look terribly female do they? As a female viewer that bothers me, because I want to be able to relate to the person onscreen when I’m doing my own private thing.

“I may not know necessarily what good pornography is,” she concedes. “I know what I like, so I’m just going to make what I like and hopefully it will sell.”