[Spike note – this article was written in December 1997 for the now defunct Canadian online magazine Can Say. With the recent furore in the UK after seven Conservative Shadow Cabinet ministers admitted smoking pot, it seemed worth republishing. Despite there being a couple of bits which make me wince, I’ve left it intact].

Something strange is occurring within Britain at the end of 1997. After two decades of media demonisation, there are faint glimmers of intelligence visible concerning the issue of drugs. Labour MP Paul Flynn has publicly stated that the war on drugs has failed and prohibition should be abandoned; the British Medical Association recently voted overwhelmingly for the legalisation of cannabis for medical purposes; convicted dope smuggler Howard Marks has become a best-selling author and bona fide celebrity, even standing for parliament at the last election; while The Independent newspaper has begun a high profile campaign for cannabis’ complete legalisation. Even a year ago, the suggestion that any of these events would have come to pass would have been met with derision. What has brought about this distinct change in attitudes from the most traditional voices in society? 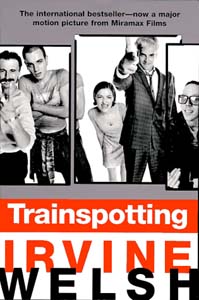 The simple answer would be Trainspotting. The phenomenal success of the film and Irvine Welsh’s novel of the same name brought the realities and reasons for drug use into the mainstream for the first time. It became the second most successful British film of all time, beaten only by the diametrically opposed Four Weddings And A Funeral. But why would so many people pay to see a film which unflinchingly documents the misery and degradation of heroin addiction? Because, beyond its plotline, Trainspotting also caught the reason that underlies virtually all of the country’s drug use, whether it be heroin, ecstasy, acid, speed, dope or whatever – and that reason is the attempt to feel fully alive.

You didn’t need to take heroin to understand and empathise with Trainspotting’s characters. Renton’s “Choose Life” speech has taken on iconic status in Britain because it succinctly states everything that’s wrong with the Thatcherite dream. Trainspotting was the loudest articulation of the chemical generation’s rage against the Conservative government, who for 17 years tried to make Britain conform to a materialist vision and destroy anything that disagreed with it. Taking part in Britain’s dance culture – and so taking drugs – was a way of refusing to be part of that vision, even if you did have to come down the next day.

The threat which Britain’s dance culture posed to the government was shown by the harshness with which they attempted to repress it, most infamously with the Criminal Justice Act which gave draconian measures to the police both to prevent and break up any gathering with a sound system “playing a succession of repetitive beats”. It was the most extreme step the government took since the beginnings of ecstasy culture in Britain in 1987 with the arrival of acid house. In his essential book Altered State, Matthew Collin charts the development of ecstasy culture from its birth to the present day, documenting in passing the vast sums of taxpayers money spent by the police unsuccessfully attempting to shut down raves and come to grips with the dance explosion. As the cover quote from Irvine Welsh puts it, “At last somebody has written the real history of the last ten years”. 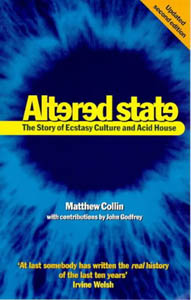 Like Nicholas Saunders’ seminal E Is For Ecstasy before it, Altered State’s portrayal of Britain’s chemical generation points out one essential fact never acknowledged by the media establishment: that taking drugs recreationally neither necessarily makes you an addict nor destroys your life. To paraphrase the late great American comedian Bill Hicks – “When I took drugs, I never murdered anyone, never robbed anyone, never raped anyone, never beat anyone, never lost a job, a house, a car, a wife or kids – just laughed my ass off, and went about my day. Sorry.”

The vast majority of recreational drug users in Britain share a similar experience. How else to explain the huge rise in consumption over the last ten years? If the drugs were as dangerous as the British media makes out, why aren’t there more Ecstasy-related deaths? If 500,000 tablets of Ecstasy are consumed per week in Britain, then the risk of death is 1 in 3.7 million. Compare that to 1 death in 600,000 for a skiing holiday in Switzerland or 1 death in 85,000 for parachute jumps, and the gulf between the reality and rhetoric of drug-taking becomes apparent. These, incidentally, are the British government’s own statistics.

It’s precisely the realisation of that gulf which is beginning to seep through to those in the higher echelons of power. Combined with the prevalence of drugs as a reference point through all areas of contemporary culture – books, film, music, art – the reality of drug use is inescapable. More and more voices, including police chiefs and MPs, are acknowledging that the war on drugs has failed – consumption has continued to rise in spite of the government’s harshest efforts. Indeed, the police are about to introduce their own drug tests on new police officers because they come from a generation where drug use is common.

This disparity between misinformed ideas about drug use and real information has been tackled directly by Kevin Williamson in his new book Drugs And The Party Line. Williamson was one of the founders of Rebel Inc., the magazine turned publishing house which first published Trainspotting back in 1993. This book is set to play a pivotal role in the revision of attitudes towards drugs because it is the first attempt to use the government’s data to undermine its own arguments concerning drug use. Williamson advocates the Dutch method of decriminalising drugs and his book’s argument is hard to fault. 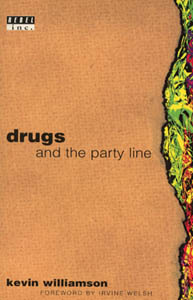 Recently Williamson set off on a “Change The Drug Laws” tour, taking with him Irvine Welsh, the convicted dope smuggler Howard Marks (whose autobiography Mr Nice has been a huge bestseller), MP Paul Flynn and Dr John Marks. The foursome asked to meet with the newly appointed “drug czar” Keith Hellawell, whose job in the new Labour government is to suggest new ways of tackling the drug issue. It was the most direct connection so far attempted between representatives from the chemical generation and those with the power to revise Britain’s drug laws.

Despite the rising tide of evidence that drug use is neither as medically harmful or socially destructive as it has been persistently represented, or the powerful voices of dissension beginning to speak up, the chances of Britain decriminalising drugs remain slim. Meanwhile, Britain’s dance culture shows no sign of waning, and the attempt to police it wastes millions of pounds of the tax-payers money each year, as well as criminalising those who are simply out for a good time. It’s already been proved that attempting to control drug use is futile – the question is now, what happens next?

The drug and alcohol treatment programs offered by rehab facilities apply different approaches to addiction treatment; from heroin to cocaine, ecstasy to LSD.