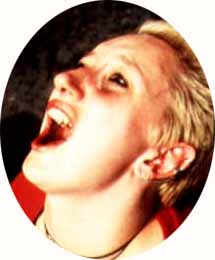 Trainspotting has been the cultural phenomenon of 1996. Irvine Welsh’s Edinburgh-based tale of drugs, dole and self-destruction has sold over 400,000 copies, the film has won critical acclaim across England, Europe and America, while the stage version has played to packed houses throughout the country. The stage versions of four of Welsh’s plays have subsequently been collected in the book 4Play.

It’s arguable that the play has been the most extreme of Trainspotting’s three incarnations, its profanity and violence sending shockwaves through the theatre circuit. The Times reviewed Trainspotting’s debut last December under the headline “West End gets smack in the face”. This month the show steams into Brighton’s Gardner Arts Centre to conclude its seventh production within a year. The cast of four has gone through 23 different line-ups in that time, testament to the psychological toll of enacting Welsh’s narcotic nightmares.

Trainspotting’s director Harry Gibson first started work on adapting the novel three years ago. Asked if Welsh had any direct input on the stage script, Gibson laughs, “Oh no, he thinks theatre is bourgeois shite. Which is, of course, completely true. But now I’ve converted him and he thinks most theatre is bourgeois shite. The sign of a true genius and professional is that they let you get on with it without peering over your shoulder.”

Gibson is already well familiar with the intricacies of censorship, thanks to the problems Trainspotting’s language has encountered: “BBC Radio asked me ages ago to do an adaptation of Trainspotting. Then they looked at it. When they realised that landing on ‘Planet Trainspotting’ means you can’t walk for two lines without bumping into a cunt, they bottled.”

It’s precisely this sort of restriction that makes Gibson passionate about the stage: “Theatre is a far more explicit medium. I’d hesitantly say that gives it the edge over the film version of Trainspotting. But then, the film version was trying to do something completely different. It’s The Likely Lads on acid. It’s also a miracle of marketing. 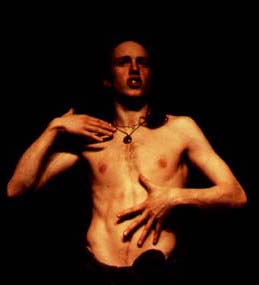 “But you don’t need that in the theatre because you know it’s bourgeois shite and no one’s going to come and see it unless you put on something really unusual. So you just concentrate on being as faithful to the original as possible. And you’ve got the freedom to do that because theatre is the exception to the rule. It hasn’t suffered much censorship since the 1950s. The theatre is very much a middle class medium and therefore it’s considered quite all right to have arseshagging and all that sort of thing going on because it won’t be a bad influence on the proles because they won’t see it. It’s the telly you’ve got to control because it’ll get through to the working class and probably pervert the children. So ordinary people have to put up with tons of censorship all the time on the telly, whereas when they go to the theatre they get to hear it like it really is.”

This freedom of portrayal has been tested to further extremes with Gibson’s adaptation of Welsh’s second novel, Marabou Stork Nightmares. Nightmares makes Trainspotting look like Ivor The Engine, with the story centring around rapist and football hooligan, Roy Strang. Gibson’s commitment to faithfully representing the text doesn’t shy away from the novel’s most appalling moments. “If you have to cry or turn away from particular scenes, then you do. But the scenes stay in. It’s necessary that they are there. It’s great to be doing this kind of stuff because it’s in people’s bloodstreams, it’s not classic, it’s not old, it’s not trying to teach you something, it’s not trying to tell you to live better lives, it’s just there like the smell of your own sweat. I really wish theatre could keep on being like that and not keep slipping back into being a snobby, musty medium.”

Despite Nightmares’ success, the chances of it following Trainspotting around the country are distinctly limited. “It’s filthy expensive because it’s an epic panto from hell. I might do a small version of it in which a small group of naked people savage each other in a cage. I’m completely serious about that. I’m very into sensationalism, I’m a shocking sensationalist.”

Even after being immersed within Irvine Welsh’s violent realities for the last three years, Gibson’s next major project sounds like a major challenge: “I’m going to do something rather delightful next. I have the rights to do a stage version of AA Milne’s When We Were Very Young. It’ll be set in 1924 which will be very lovely and no one will say ‘cunt’ at all.” 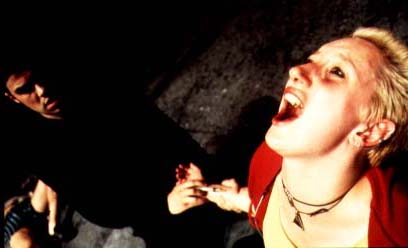