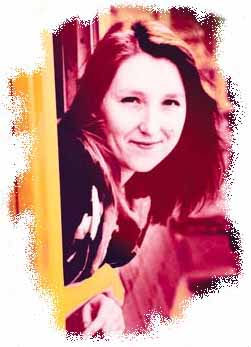 Who’s Marie Darrieussecq? The 28-year-old author of debut novel Pig Tales, which has taken France by storm. The book took just 24-hours to be accepted after she sent her unsolicited manuscript to publishers

Big deal. Well, quite. It’s sold a staggering 250,000 hardback copies and has been at number one in the bestseller list for 28 weeks and was a finalist in the Prix Goncourt

I was being sarcastic. So what’s the book about, then? The novel’s protagonist is a prostitute who grows teats, gives birth to stillborn piglets, is sodomised, gang-raped, abused with dogs and almost eaten. She wrote the book during a period of strikes in 1995

But the French are always striking. Anyway, sounds worryingly like Kafka crossed with David Lynch? Yes, it is a little outre, I suppose. But it does have a happy ending

Don’t tell me: she trots off into the sunset with a Saddleback? No. She meets and falls in love with a werewolf called Yuan

Of course she does. Thank God we won’t be seeing this as a film. Actually, Jean-Luc Godard has just snapped up the film rights. It may well prove to be the most difficult book to adapt since Naked Lunch

What drugs was she on when she came up with the idea? Hog powder dust, probably. Darrieussecq looked in the mirror one day and tried to imagine herself with trotters

Is she a big fan of Only Fools And Horses, then? No, that’s Trotters. She found the idea “strange, funny and shocking. A pig is contrary to all that is demanded of a woman. It’s fat, ugly, obscene, dirty”

Has she ever met Nina Myskow? I doubt they move in the same circles

All of this pork morphing hasn’t put her off bacon butties, I trust? Good God no. In fact, she comes from Bayonne in France, which is known as the ‘city of ham’, and she still says that it’s the best in the world

So, a typical line from the book? “The clients enjoyed seeing their flowers nestled against my breasts. And what reassured me was that they ate the flowers, too. They’d lean over me and snip! They’d pluck them from my decolletage with one bite, then chew them with a greedy air and a come-hither look”

How can I get all this adulation and praise for my first novel? Think of an animal and describe how someone changes into it

OK, how about a badger? It’s just not that black and white, I’m afraid

I’m supposed to be impressed about this sexy, feminist parable for our times, aren’t I? That sounds like sow grapes to me