here are going to be people who’ll complain that this book and its author are just a little bit too clever for their own good. In The Collector Collector, Tibor Fischer strains suspension of disbelief to within millimeters of its snapping point, thanks to a presumptuous – and on the surface, unpromising – plot device: Telling a love story from the point of view of a 5,000-year-old bowl. As in, the kind that would hold oatmeal, or Campbell’s Cream of Mushroom soup. But not just any bowl: One that can read minds, tell stories telepathically, deliver snide one liners, magically change shape or reassemble itself if smashed, one which – as it pointedly and fairly self-righteously points out – has a soul.

Let the naysayers sniff. Those who can’t look past such minor improbabilities are ultimately cheating themselves out of a fun, seductively funny read. Fischer’s ceramic narrator – “thin walled, sporting the scorpion look of Samarra ware that was the rage in Mesopotamia” – has got 6,500 years of human folly to tell tales about, and when the stories aren’t poignant, insightful, or startlingly imaginative, they settle for simply being hilarious.

Samarra the Bowl’s tale begins in the near-present, focused upon three central characters: A hypochondriac millionaire art collector, Marius, who carries fire extinguishers with him wherever he goes; the sultry and parasitic kleptomaniac, Nikki, master of the imaginative lie; and Rosa, the uncomfortably-single art appraiser who just happens to be holding a lonely hearts’ columnist hostage at the bottom of an unused well. Typical everyday folk, whose typical everyday actions lead The Collector Collector‘s plot to heights of byzantine absurdity, while the bowl’s recounting of parallel events from history serves as Fischer’s cue to cleverly interweave a cornucopia of sparkling, if only tangentally relevant, sub-stories and subthemes. 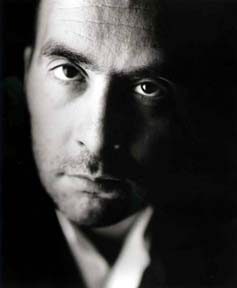 Tibor Fischer: go on, give us a smile…

The central story the bowl’s trying to tell, in its circuitous and disjointed way, is of Rosa’s long and winding road to romantic success. Bereft at the loss of her Dream Man after a single brief, magical encounter, Fischer’s kidnapper-heroine flounces and thrashes her way through her own personal La Mancha, Nikki robbing her blind on one hand, Marius clinging like a barnacle on the other as she looks for love in all the wrong places – the past, for instance. Along the way they careen through others’ lives, and are in turn careened into by a revolving-door cast of captivating minor characters, such as Nikki’s Harley-riding guardian angel, a car thief who meticulously washes the vehicles and returns them, a travelling mummy-vendor named Wondernose, and a succession of frozen iguanas. Love Story this ain’t.

Well, can a lonely young art appraiser prone to felonious false imprisonment, aided and abetted by nymphomaniac junkies and paranoid misers and whose closest confidant is a piece of crockery, find true happiness in the mixed-up world of the ’90s singles scene? Just maybe, if Fischer’s loquacious vessel is to be believed; stranger things have happened. But stranger books have seldom been written, and when they have, they’ve seldom been this fast-paced, this funny, or this effortlessly readable. In undertaking The Collector Collector, Tibor Fischer has opted for a subject and style a world apart from his acclaimed Under The Frog, seeming to purposely set himself up for failure on any number of counts, lack of cohesion and glaring contrivance chief among them. But in a seemingly effortless display of authorial sleight-of-hand, Fischer transforms apparent weakness into strength, carefully weaving the disparate strands of his web, then finally drawing them together in a surprising, satisfying “aha!” moment in the book’s last three pages.

The Collector Collector amounts to a thinking person’s Dr. Seuss: A novel where fancy and fantasy hold sway, where the realism and the portentious “relevance” deified in so-called Serious Literature are unceremoniously scrapped in favor of joyous, artful wordplay and expansive flights of imagination. It’s fiction that’s indulgently, ecstatically fictional, while retaining emotional resonance and odd believability – talking ceramics or no. In a word, art.

It might make you wonder what your Tupperware is thinking about…