This is a curiously enigmatic book, a detective story which remains unsolved… or at least unresolved. Joy Hancox explores the nature of the Elizabethan stage, raising searching questions about its nature and function, sucking the reader deeper and deeper into her research.

The stage plans Hancox acquired in 1984 were 17th architectural drawings which defied interpretation. Compared to the instantly recognisable blueprint, or to today’s 3-D, computerised images, these were alien artefacts – easily mistaken for elaborate, geometric designs. And yet, they articulate the rationale behind the very shape and proportion of the theatres which fed a popular demand for drama and fantasy.

The plans, moreover, implied that, in the Elizabethan era, there was far more to stage design than acoustics, lighting, and seating arrangements. Rather, the polygonal shapes which characterised the London theatres embodied contemporary notions of the occult, magic, and arcane knowledge long since lost.

At every turn, the enigma grows darker. The Elizabethan playhouses were a cornerstone of English nationalism – how many of Shakespeare’s plays carry a propaganda message? His histories certainly hammer home the message that the Tudor succession was legitimate, that Elizabeth’s grandfather, Henry, had right on his side when he deposed Richard at Bosworth. Shakespeare famously characterises Richard as crippled and deformed, implying that his entire body politic was corrupt, a cancer righteously excised by the Tudors.

Many of Shakespeare’s plays emphasise the theme that might is right – it is the indecisive Hamlet, the weak Lear, the insecure Othello, or the reluctant Macbeth who perish, to be succeeded by men who are prepared to act decisively. Dissect the plays, and there are subtle political messages which must have been approved by Elizabeth’s censors. For a playwright to put forward any, even cryptic, satire would have been to risk his head. 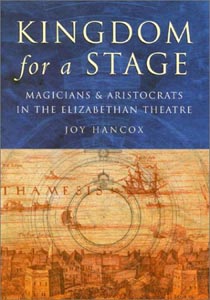 The theatre was clearly an invaluable propaganda tool – every bit as effective as the pulpit, or television. Officially, legally, actors were regarded as little more than thieves and vagabonds, actresses as common prostitutes. And yet, the Queen and her leading retainers all maintained their own companies of players – drama was firmly in the control of a tiny elite.

Hancox explores this uneasy relationship between art and power… and begins to unearth coincidence, happenstance, serendipity, and passing shadows which cloud our accepted perception on how drama was performed… and viewed. If the modern writer protests that art is a creative triumph of the unfettered imagination, Elizabethan art was tightly controlled and manipulated.

Hancox drafts an esoteric geometry of ideas and philosophies, of courtly intrigue, of espionage controlled by a 1984 civil service. Shakespeare may have helped invent the English language as we know it, but you can sense the pre-Orwellian shroud which oversaw his efforts.

And, if one of the dominant themes of Elizabeth’s rule is the struggle to maintain the Protestant succession against the threat of Catholic claimants and a Papist fifth column, Hancox uncovers a darker, ancient orthodoxy which must have sat uneasily with this overt schism within the Christian states of Europe. She finds evidence of the occult and magic deeply rooted in the imagination of many of the leading players in the Tudor court.

The joy of this book – and it is not an easy book to read, despite the clarity of Ms.Hancox’s writing – is the very fact that the devil’s in the detail. It is a densely scholarly piece of work, highly personal in places, highly individual, not always entirely convincing… and yet you find yourself rereading chapters, pondering, wondering, looking for other sources of information.

She successfully opens a Pandora’s Box of doubt and suspicion. You begin to revisit your ideas about the Elizabethan stage – the physical building, the dramas, the personnel. This is not a book to put away – put it down, yes… but you will find yourself returning to reread and rethink.

For anyone interested in the theatre, this is essential reading – if only because it will force you to inquire further, whether or not you accept the premises. This is a mystery play with a difference.