When General Booth, founder of the Salvation Army, complained that ‘the devil has the best tunes’, he meant the sensual, drunken pleasures of the working class pub and music hall, not the elegant appeal of Gilbert & Sullivan. Yet Arthur Sullivan’s light operas deliver enduring, popular tunes, and the words of W.S.Gilbert embody a caustic commentary on Victorian society.

Gilbert & Sullivan occupy a unique place in English life – solid, respectable, instantly recognisable. If their comic operas are archetypally Victorian, they have endured – scores of professional and amateur companies include ‘Pinafore’, ‘Mikado’, etc., in their repertoires, while the distinctive G&S style continues to serve as a reference point for comedy – parodies are regularly churned out to deflate some politician, party, or pompous personality.

But Andrew Goodman isn’t writing a biography of Gilbert & Sullivan. He offers, here, an almost-autobiography of London, letting the streets and buildings speak for themselves through their association with G&S and the social world they inhabited.

This is not effortless bedtime reading. Goodman weighs the building bricks of social, urban, architectural, and cultural history, binds them together with guide book mortar, and lays them into a street map of Victorian London and its theatregoing world… which does not make it easy to digest, for there is a recurring subtext of references and allusion which can leave the casual reader struggling. Or hungry to learn more.

These are almost raconteur writings – sketches of a city and a tour of its Gilbert & Sullivan links, comprehensively researched and vividly recounted. What Goodman achieves is a vision of 19th (and 20th) century London, illuminated by vignettes of prominent Victorians.

Goodman’s is a documentary style, but not in the form of glib camera panning and tracking and saccharine voice over. Rather he mimics the pander quality of a bric-a-brac market. He invites you to leaf through boxes of old postcards: study the sepia photos, flipping magic-lantern style before your gaze; stop, occasionally, to take one out and read the back; pause, and imagine who wrote it, who read it, what their lives and relationships involved; select and shuffle the pictures to construct your own interactive narrative. 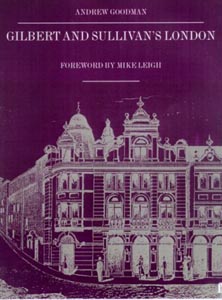 Goodman’s history builds frozen snapshots into a silent movie of an organic city, growing, living, in places dying and being rapidly built over. This is more a travelogue in the traditions of Dervla Murphy or William Dalrymple than a smooth guide to London. It is a visitor’s time travel companion, not a tourist’s.

A brief stopover in some city gives tourists time enough to take in a few over-dressed highlights, following a non-stop itinerary of sights, but bypassing the sites – the real, living environment, with its pasts, presents, and futures spectral behind the changing facades. Cities cannot be understood through the window of an impatient taxi, casting channel hopping glances at anonymous urban landscapes. To appreciate a naked city, an old city, the visitor has to walk its streets, feel them, get into the plot of their storylines.

Following a guidebook is never a satisfactory way to absorb place. There may be plaques on walls to inform the passer-by that W.S.Gilbert or Arthur Sullivan once lived here, but that conveys little of significance. It’s like trying to read a book by studying the footnotes and ignoring the text.

Goodman unveils the character of late-Victorian London and its absorption into the lives and works of his elegant, privileged, human protagonists. Consider how rarely any of us ever study the human face. We coyly, politely note the current expression, the eyes, the set of the mouth; we rarely focus on the whole, its lines and creases, bumps and blemishes, moles and peripatetic hairs… its composite history.

Painters have licence to erase wrinkles and moles. Photographers – since before the airbrush – have smoothed out texture by careful lighting and strategic camera placement; it’s only in distressing times, when the dispossessed become the darlings of polite society – the Depression, London Blitz, or Third World famine – that they show pain, grime, and the years of living which mould the human face. Agony, as honest fetish, can sell a magazine cover almost as effectively as Buffy. Almost.

Goodman explores the lines and pores, feeding us with anecdotes and snippets, doling out cryptic pieces of a mobile jigsaw puzzle. He investigates a living city, not an idealized one, and invites the reader to put it into perspective. He looks up from street level, looks inside, gives buildings purpose and presence by blending bricks and mortar with the people who climbed their steps, opened their doors, and drew the curtains on the life therein.

As a Scot, I’ve always found London too foreign a capital. It’s a fine city – I lived and worked there for four years – but it’s an invasive world with the mindset of an imperialist; the narcotic of its political, economic, social, and cultural past and power is absorbed by osmosis. London has icons – Piccadilly Circus, Tower Bridge, the Changing of the Guard. But real London life – even for so exalted a circle as that of Gilbert & Sullivan – revolves around work, home, and play, and an endless stream of hasty interactions with anonymous people and places.

Goodman takes snapshots of London’s bygone world, then makes picture postcards of them for the reader. In doing so, he establishes patterns of significance, glimpses of interactions, and a sustained sense of movement and changing times.

Lavishly illustrated, with black and white pictures and vivid words, this is an intriguing, esoteric work into which you may be seduced. An essential for the Gilbert & Sullivan enthusiast or anyone interested in London’s past, it has the capacity to infect the casual reader with curiosity and a desire to explore further… and perhaps even take in the next production of The Pirates of Penzance. Perhaps.