Marcus Moure’s 1995 interview with J.G. Ballard about his novel Rushing To Paradise

Ballard is one of the best writers of speculative fiction alive today. Whether exploring the innate sexuality of automobile accidents, the power of dreams as reality, or navigating through the rubble of modern civilization, his often savage, apocalyptic work has influenced artists and filmmakers alike. Ballard himself counts among his influences the surrealist painters Dali, Magritte, and Ernst, as well as William Burroughs, whom he considers to be one of the most important authors of the twentieth century.

Ballard first entered the literary world as a science fiction writer, a genre he soon exhausted and has not explored in years. His transition to the mainstream was not entirely smooth, however. His 1970 anthology, The Atrocity Exhibition, was deleted from the Farrar, Straus and Giroux catalogue soon after its U.S. publication because of short stories like “Why I Want to Fuck Ronald Reagan” and “Plan for the Assassination of Jacqueline Kennedy.” After reading his classic 1972 novel, Crash, an editor wryly commented, “The author is beyond psychiatric help.”

I found Mr. Ballard to be quite sane – piercingly so, in fact – as he talked to me recently from his home in Shepperton, a suburb of London. Ballard is the author of 16 novels, including Hello America, The Crystal World, Empire of the Sun, The Terminal Beach, The Unlimited Dream Company and The Disaster Area. His newest novel, Rushing to Paradise, was just published by Picador U.S.A.

Ballard as seen by Ballard

MM: How do you see yourself as a writer and what do you think is your niche in the literary world?

JGB: I can’t speak for the United States, but I suppose some still refer to me as a science fiction writer. But since Empire of the Sun came out ten years ago, I think people have welcomed me to the mainstream. Although I’m not so sure I want to be embraced by the mainstream. I think I’m still what I always was, a kind of fringe writer. I think I’m an imaginative writer who began his career by writing science fiction, but I haven’t written any, really, for a very long time. I don’t even consider Crash to be a science fiction novel. I don’t know whether you’ve read it or not.

MM: Definitely. It seems to me that fantastically imaginative fiction tends to be lumped in with the whole science fiction genre.

JGB: Exactly. If you look at twentieth century novels, you can see that there’s a sort of mainstream, or what I would call realistic or naturalistic fiction. And then there are the imaginative writers who often tend to be mavericks. You know Genet, Celine, Burroughs, and so on. And I like to think of myself as a maverick. I’m certainly not a literary man, and this is an important point. I’ve met a great number of writers, novelists rather, English ones in particular, whose stock of references – their sort of instant associations that come to mind when they create and all that – all tend to come from the world of literature. Mine do not.

I’m interested in science and medicine, the media landscape, and so on. My reflexes are not the reflexes of a literary man. I’m more of a magpie pecking at any bright pieces of foil. I’m interested in the world, not the world of literature.

MM: So you wouldn’t file your work of the past 15 or 20 years under science fiction?

JGB: No, not anymore. Some of my work was, there’s certainly no question about that. And I’m very proud that I was a science fiction writer. As I’ve often said, it’s the most authentic literature of the twentieth century. Sadly enough, most science fiction is being written by the wrong people nowadays. The constraints of a certain kind of commercial fiction have tended to formularize the field over the last 50 years.

MM: Speaking from my own experience, I think many people, especially as young readers, are drawn to the newness, inventiveness, even classic adventure elements of science fction, but eventually outgrow it. As you said, you find the repetition and formula simply bore you. Especially when you realise there’s so much more out there. Why limit yourself? Why be just a science fiction writer or reader?

JGB: I agree with you. That’s true. And that’s why I myself stopped writing. People within the science fiction world never regarded me as one of them in the first place. They saw me as the enemy. I was the one who wanted to subvert everything they believed. I wanted to kill outer space stone dead. I wanted to kill the far future and focus on inner space and the next five minutes. And sci-fiers to this day don’t regard me as one of them. I’m some sort of virus who got aboard and penetrated the virtue of science fiction and began to pervert its DNA. 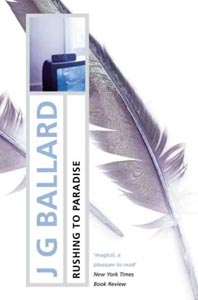 MM: Your new novel deals with obsessive themes like fanaticism, radicalism and militant feminism, all within the frame of the extremist wing of the environmental movement. It’s not only eerily timely, it also strikes a raw nerve, especially in view of the healthy wave of anti-political correctness sweeping ouer the United States at the moment.

JGB: Well, that’s a good thing, isn’t it? The great talent of the United States is to take things too far, so that you have these huge pendulum swings of sorts. Always correct and then reverse. And then correct and reverse again. Here in England, I would say the extremist fringe of the feminist movement is largely positive. I’ve got two daughters as well as a son, and they’ve benefited enormously from the feminist movement of the past 20 years. England is a very class-bound society, and women, until recently, were practically an inferior class. Most professions were closed to women 30 years ago, except teaching and publishing. Nowadays they’re all mostly open. So we do have a few extremists, but nothing compared to the U.S., where you really do have some very strange people.

MM: You said in a recent interview that “Everything should be done to encourage more sex and violence on television”.

JGB: Yes, I did say that. And I think it’s true. I mean, I live in the most censored nation in the Western world. There’s no question about that. Many people have said so. Film, TV videos, and art are more heavily censored here than anywhere in Western Europe or the U.S.

Censorship in England has a clear political role. It represents the fear of the established order that given any sort of imaginative freedom, or too much of it, the power structure will collapse. If people see sex and violence treated frankly, they may turn the same frank eye upon their own political situation. And start climbing up the base of the pyramid towards the apex. The people in real control sanitise the view of the world for us. Absolutely.

MM: In his book, The 99 Best Novels Since 1939, Anthony Burgess considers your novel The Unlimited Dream Company to be your most important work to date. Which do you consider your best?

JGB: My most original and probably best novel is Crash. This is probably where I pushed my imagination as far as it has gone. I’ve also got a soft spot for other books of mine, most notably The Atrocity Exhibition. The Atrocity Exhibition is practically incomprehensible to most readers, whereas Crash is directly intelligible. There’s no doubt at all about what the author’s getting on about.

MM: Can we talk about Empire of the Sun? That is, if it isn’t already an exhausted topic. What is your opinion of Steven Spielberg’s film version of your novel?

JGB: I was very impressed by it. I thought it was a fine film. In fact, trying to remain as neutral as possible, I think it’s a much better film than Schindler’s List because it’s more imagined than Schindler’s List. I think the film is a remarkable effort in many ways. He extracted a wonderful performance from the boy. He was very faithful to the spirit of the book. There are always problems when Hollywood tackles a war film because the conventions of the entertainment cinema can’t really cope with the horrors of war. Still, I think it was a remarkable film, and more and more people are beginning to realize it.

MM: Have you read anything recently thut impressed you favourably?

JGB: Well, I don’t read much fiction nowadays, to be honest. Writing the stuff all day means when I read I tend to read nonfiction. It feeds my imagination. I read a great deal, but I can’t really pick a landmark book offhand. Let’s see, well, I just finished The Moral Animal by Richard Wright, a study of neo-Darwinism. That was quite impressive. Actually the best novel I’ve read in a while is by that Danish writer Peter Hoeg, Smilla’s Sense of Snow. I thought it was a wonderful book. Far more than a mere thriller. In fact, it’s a pity that it had any thriller element to it at all. It was much more than that. It was quite remarkable on all sorts of levels. I hope it did well in the states. My girlfriend is reading his new one (Borderliners) now

MM: What are you working on now?

JGB: I’m halfway through another novel untitled as of yet – another sort of cautionary tale. I’d rather not discuss it in detail thaugh.

MM: Any plans to come over to the States and promote Rushing to Paradise?

JGB: Oh, probably not, I’m too engrossed in the new book.